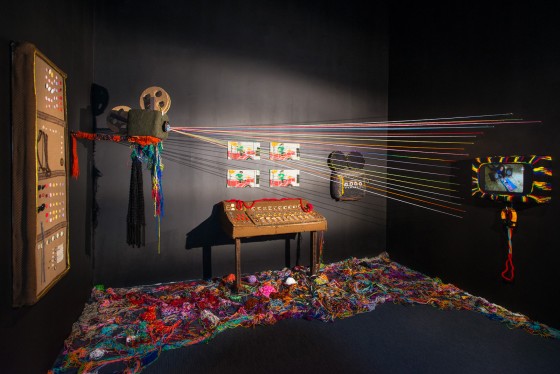 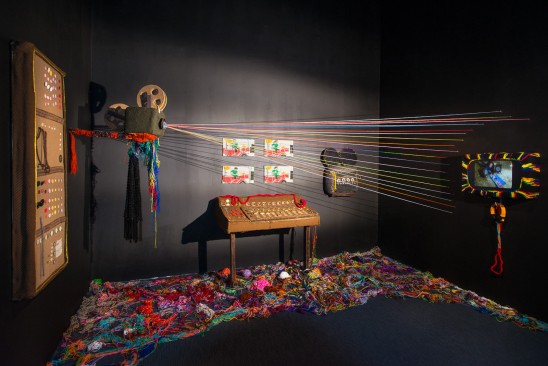 Recreated environment for Steriogram video “Walkie Talkie Man,” directed by Michel Gondry in the exhibition “Spectacle: The Music Video,” at Museum of the Moving Image.

Anyone who grew up in the MTV generation knows that the influence of music videos had a long reach.  For some of us growing up in small towns, all that spandex and whipping hair was shorthand for everything cool.  Unfortunately, my 3-year-old son isn’t nostalgic and simply sees music videos as synonymous with Youtube. The Museum of Moving Image’s exhibit, “Spectacle: The Music Video” explores the video’s influence on this “contemporary culture.”

Over 300 videos are represented on two floors in this show, so anyone would be hard pressed to consume every decibel of media pouring through these high def speakers.  A cross between a record store and a well lit dance club, the exhibit is a real auditory experience.  It was fun to introduce my son to A-Ha, Radiohead and Bjork ( especially her 3-D video “Wanderlust.”)  Kids will find many things to get excited about: giant lego props from a Michel Gondry directed White Stripes video, a Blur video featuring an animated carton of milk, and giant video game consoles streaming media.  Step into interactive rooms where sensors pair your movements to the video speed, and then dance to loud music in a mirrored room.  Older kids will love discovering “cover videos” by Weird Al and the Muppets.  My son was especially interested in DEVO, whose member, Mark Mothersbaugh, is currently a star in the TV show “Yo Gabba Gabba.”

For parents, it’s interesting to see the history of music videos. Embarrassingly, I squealed to see a real MTV Video Music Award. The section called “Agent Provocateur” has a collection of once banned videos (not child friendly) where you actually have to peer through a peepshow hole to gawk at videos by Pearl Jam and Madonna. The technical innovations of video production are highlighted in a “Radiohead” video, made by a groundbreaking laser technology instead of cameras.  Unfortunately, for any music video buff- there are many glaring omissions.  For instance: where in the world was Michael Jackson? 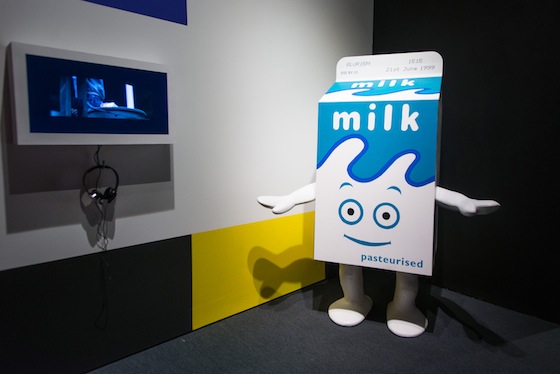 A six-foot tall milk carton prop from the Blur video “Coffee and TV” recreated for the exhibition “Spectacle: The Music Video.” Credit: Eric Harvey Brown / Museum of the Moving  Image

Although this is a solid exhibit, it’s inherently hard to present the shock and excitement that some of these artifacts stirred when they aired for the first time.  Watching them in the highbrow enclave of the museum has the effect of my grandmother dancing to punk– which in fact she probably will do if she visits the current MET exhibit, “PUNK: From Chaos to Couture”.  But maybe that’s the point.  There doesn’t need to be a special channel for music videos anymore, it is immersed completely in our digital lives.

There’s enough media to keep one occupied for days, but we wrapped it up after an hour to get some lunch. We bypassed next door Starbucks and Pizzeria Uno, and walked two blocks to Tacos Mexico.   The food here is super fresh, super delicious, and really reasonably priced (tacos are just $2.50!)  My son got a chicken cilantro taco and a watermelon juice, while I indulged in two super spicy vegetable tacos.  Their burritos and tortas also looked and smelled amazing, but will have to wait until our next trip to Queens.