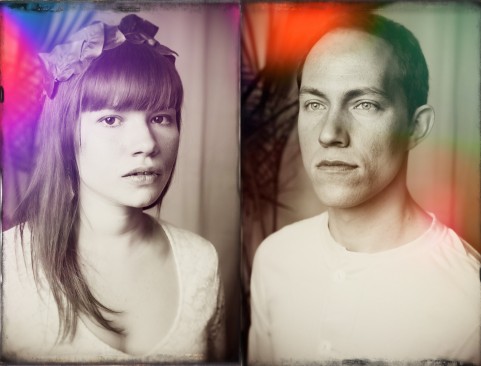 Paul Hammer’s father tried to talk him out of being a professional musician. That’s not all that unusual, except that his father is Jan Hammer, the keyboardist and composer known for his work with the legendary ’70s jazz-fusion group, the Mahavishnu Orchestra –and, to ’80s pop culture fans, his number one hit “Miami Vice Theme.” The elder Hammer told his son that it’s just too hard to make a living in music. “He was always very cautious about that,” the younger Hammer told me over the phone. “That said, he was a huge part of it. He taught me at a very young age how to play drums, my basic knowledge of piano, and music theory and songwriting.”

Hammer followed his own muse and seven years later, he and musical partner, Deidre Muro, have built their band, Savoir Adore, from an experiment into a sensation. The duo–augmented by guitarist Alex Foote, drummer Tim McCoy, and bassist Gary Atturio–recently signed to Nettwerk Records, which reissued their very dreamy album, Our Nature. It contains a brand-new track, “Beating Hearts,” which wasn’t on the original version of the record, which came out last fall.

With its sweeping and dazzling soundscapes, electronic beats and vocals from Hammer and Muro, Our Nature is a reflection on the amount of time the band spent on producing it. “For this, we really wanted to step back, take our time, let the songs kind of develop naturally,” says Hammer. “Some of the songs on this record, like “Dreamers”–it took three years to write and record. That’s just the way it kind of worked out. We started the song, sat on it for a while, and then piece by piece added sections.”

Hammer concurred that Our Nature marks a musical progression from the band’s previous records, The Adventure of Mr Pumpernickel and the Girl with Animals in Her Throat and In the Wooded Forest. “Also in terms of the story itself, we wanted to step back and focus on the narrative a little bit more in a different sort of way,” he says. Our Nature tells a story of a girl and a monster. “It’s a metaphor for a kind of dangerous but wild love between two people,” says Hammer.

In addition to their new record, the Hammer and Muro have also been working on a few covers as of late, including “Pop Goes the World” by Men Without Hats, best known for the ’80s hit “The Safety Dance”–you may have heard the song in this TV commercial for Tide Pods. They also recorded the Thompson Twins’ “Hold Me Now” for the Dreamers EP and are working on Prince’s “I Would Die 4 U.”
Savoir Adore’s latest album, Our Nature, is out now.
Meanwhile, Savoir Adore recently wound down the North American leg of their headlining tour; other than a scheduled festival date in Cincinnati, the group is planning to play internationally, including South America. “We have this growing fan base in Chile, so we’ll hopefully see Bogota, Caracas, Santiago, and Sao Paolo,” says Hammer. “That would be amazing. Then after that, we’ll be able to go back to Europe because the record is being picked up pretty well on radio in Italy and Germany. We’ve never done a tour of continental Europe, we’ve only played in the U.K. and did a show in Paris a couple of times. Fingers crossed, we’re gonna be traveling around the world in the fall.”

And, they’re hoping to work on some new material soon, as well. “I think once we get home and things settle down a bit much later in the summer, we’ll probably start working on new material,” Hammer says. “We already have ideas for the next record but we haven’t time to work on them. I wouldn’t be surprised by the end of the year we have a lot of new material as well.”