It’s all in the family with the Wainwrights, and this Wednesday’s show at Brooklyn Academy of Music is no different. Siblings Rufus and Martha celebrate the life and career of their mother, folk singer Kate McGarrigle, with an evening of songs from her catalogue, along with all-star special guests including Norah Jones and Emmylou Harris. Proceeds benefit the Kate McGarrigle Foundation, which raises money to find a cure for sarcoma, the rare cancer that McGarrigle died from in 2010. 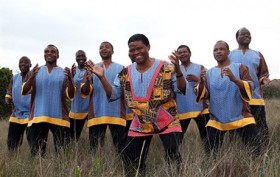 For over 50 years, South African choral group Ladysmith Black Mambazo has made uplifting, joyful a capella music that has crossed borders and spanned musical genres. Featured on Paul Simon’s 1986 album Graceland, Ladysmith Black Mambazo has collaborated with esteemed musicians ever since. Still led by their founding member, Joseph Shabalala, this evening of music just screams summer.

Known as the female half of the indie-rock duo Fiery Furnaces, Eleanor Friedberger has made a name for herself as a solo artist with two solo albums, including this year’s Personal Record, a collection of beat-heavy, hearty songs about love and loss. But her songs are punchy, not dreary, and Friedberger is no wilted flower. She hits the stage at Music Hall of Williamsburg Friday night, with TEEN and Cassandra Jenkins.

The third annual 4Knots Music Festival storms into South Street Seaport this Saturday with a loud and raucous 10 band line-up. The festival is stacked with indie-rock buzz bands, including Brooklyn’s  The Men and Parquet Courts, and is headlined by guitar virtuoso Kurt Vile and his band, the Violators. Rain or shine.

Cap off your weekend with Morning Teleportation, a Kentucky band that has enough kick to ease the sting of weekend’s close. With boisterous choruses, frenetic instrumentation and lead singer Tiger Merritt’s frenzied, staccato vocals, you might just forget that Monday’s on its way.