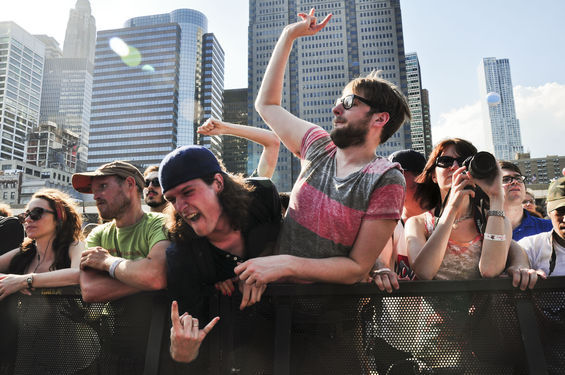 They’re stoked that there are no lines for beer. Photo: Emily Tan

Summer brings a strange problem for the New York concertgoer: the ratio of joy over so much free music to weather issues, which really don’t care how long we’ve been waiting to see a band. No matter amazing the line-up, sometimes the temptation to stay home, drink beer, and proclaim your love to your air conditioner overwhelms.

Last weekend the the Village Voice’s 4knots Music Festival, offered an excellent reason to get off the collective couch and out into the sun.  After last year’s festival, which featured an unannounced guest appearance from a fire at Pier 17, I was a little hesitant–I prefer my surprises to be musical, not flammable.

Fortunately my fears were unfounded. I don’t know which weather gods the Voice sacrificed to for such a beautiful Saturday, but I hope they’re willing to share. They could give other daylong festivals, free and paid alike, lessons in weather god supplication as well as organization, crowd control and how to do outdoor music right. 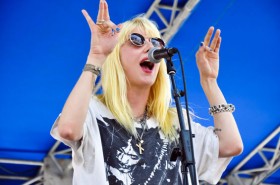 There was an amazing lineup, headlined by Kurt Vile and the Violators, and featuring a slew of punk infused acts like Brooklyn’s own Parquet Courts, White Lung, the Babies, the Men, and Reigning Sound. It was consistently high energy, and full of sing-along choruses.

All too often, outdoor shows include bands whose sound doesn’t translate well to the setting. The acoustics are off, the wind disruptive. From the first few fierce riffs that kicked off the Babies’ set, I knew the bookers got it right. There was a 60s girl-group feel, with harmonies and airy vocals. On the mainstage, White Lung brought much needed female-fronted punk energy–they make me long for a Riot Girl rebirth.

Parquet Courts might sound a little disaffected on record, but live their energy was big enough to start a mosh pit. The melodies are sharp but catchy, and the wiry basslines reminiscent of post-punk bands, while the lyrics track the trials of being young and stoned and very hungry. Don’t sleep on this band.

As for Reigning Sound the riffs and the attitude scream punk, but the handclaps and ooohs and aahhs in the backups suggested soul. 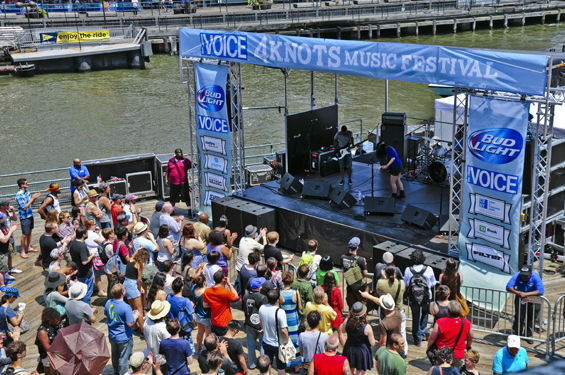 The crowd at 4knots was high energy, but well controlled. Photo: Emily Tan

Perhaps the biggest revelation came from Marnie Stern, a guitar powerhouse whose ferocious shredding had everyone from the security guards to babies in tiny headphones to the seaport tourists dancing and head bang in joy. And you can’t argue with babies.

As if the low, low price of free dollars for so much great music wasn’t enough, the festival was actually organized. Schedules and directions were posted in prominent places, there was plentiful shade, and places to buy drinks. And speaking of drinks, water was a reasonable $2. I didn’t even have to pay $6 for a bottle, unlike some festivals that will remain nameless.

The festival gave some love to the South Street Seaport, which took a beating during Hurricane Sandy, and if Piers 16 and 17, which were home to the festival’s two stages are any indication, its resurrection is well on its way. 4knots 2013 took place in a magical summer festival land, where the beach balls never fall, the beer is always cold, the breezes balance the heat, the music soars and even the East River looks so pretty.  It was a reminder of why we go to summer concerts in the first place, and why, despite the possible heat, rain, crowds and other things we love to complain about, we should plan on going again.