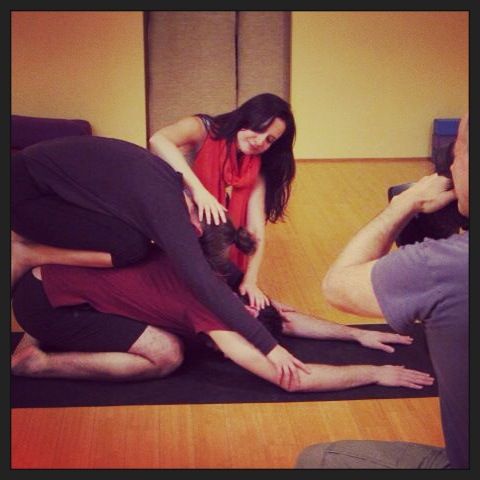 Yoga Sole in Windsor Terrace is the scene of a new web series about the weirder side of partner yoga. Photo: Yoga Partners

At its best, yoga is an ancient, mystic practice with the power to shake the cobwebs out of your subtle body and realign all your chakras (we’re paraphrasing buy go with it). But sometimes it just leads to some uncomfortable, intimate moments with perfect strangers or even lawsuits over asanas. Its the latter kind of interactions that leads to laughter in a new web series about the weirder aspects of yoga practice that’s currently being shot at Yoga Sole in Windsor Terrace.

Created by Leah Henoch and Katie Schorr and directed by Lance Rubin, Yoga Partners follows a newbie yogi who gets stood by her boyfriend (who gives quite possibly the funniest excuse for getting out of exercise, and a relationship, we’ve ever heard in the series’ first episode–see for yourself in the video below). When she finds herself in a partnered yoga class sans partner, hilarity ensues when her overly earnest instructor steps in to take his place. What makes this web series resonate is that it rings true in terms of the kind of people you can come across in class–have fun picking out some archetypal characters in the first two episodes–the second of which was released today.

“We do yoga every week and Leah is a certified yoga teacher, but we both feel like we are missing that take-it-seriously chip,” Schorr says. “We can’t attend a class together and not crack up. It’s actually a problem. We probably shouldn’t take class at the same time because we will inevitably disrupt the class.”

“Also, Katie can’t do handstands,” Henoch says. “This has prompted in her feelings of inadequacy and, as a result, intense skepticism. Look for art mirroring life in Episode No. 4.”

Eventually the series will have five episodes in total, with one being released every two weeks starting in August and a final episode in September. The crew promises plenty more awkwardness to come. “[Expect] more manic yoga teacher behavior, a LOT more awkward body contact, a weird romance [and] a yoga cat calendar,” Henoch says.