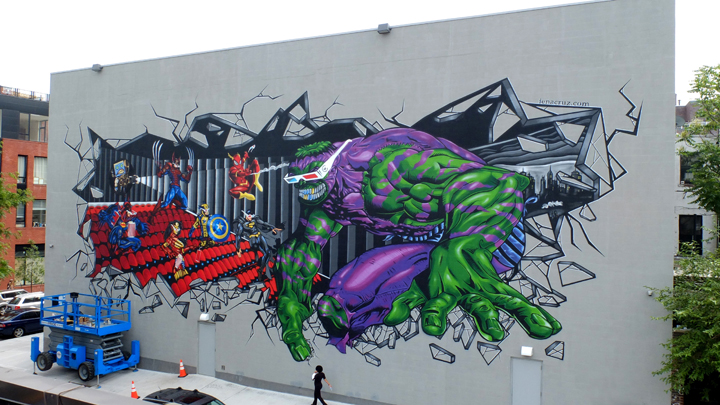 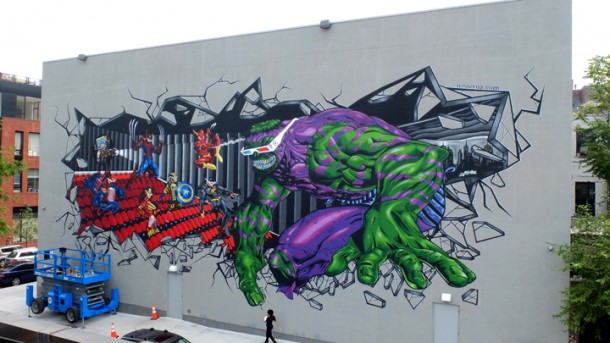 It took Federico Massa three weeks and 150 cans of spray paint to create this superhero-themed mural on the side of Williamsburg Cinema. Photo: Emiliano Rubinacci

If you’ve walked by Williamsburg Cinema on Grand Street lately, you might have noticed some not-so-subtle changes to its exterior. This super-huge, superhero-inspired mural is the work of Federico Massa, an Italian-born, Brooklyn-based artist who was commissioned by the cinema to create comic book-inspired street art.

Smashing through the cement of the cinema’s side wall to expose rows of red theater seats within is a larger-than-life image of The Incredible Hulk wearing a pair of old-school 3-D glasses and busting the seams out of The Phantom’s iconic purple suit. The big green guy is joined by Batman, Wolverine, Spider-Man, Superman, Captain America and Wonder Woman, all of whom have swapped suits with other classic comic book characters–Batman is dressed in Superman’s singlet, Wolverine in the Spidey suit, Superman in Batman’s black and yellow, Spider-Man shoots a web from his wrist while dressed up like The Flash,  Captain America wields his shield while looking like Wolverine and Wonder Woman’s wardrobe switch required a little cross dressing to don Iron Man’s metal armor. 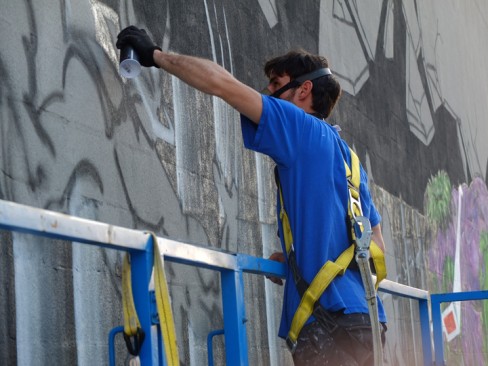 Of the three murals Massa’s created in Brooklyn, his superhero design for Williamsburg Cinema is the largest in scale and required the use of a scissor lift to spray paint it. Photo: Stefano Ortega

“The best reactions are from kids,” says Massa. “Sometimes I would stand behind them, and they would point and know all the superheros and whose costumes they were wearing, like ‘Oh! No way!'”

It took Massa, who is originally from Milan and inks under the moniker Cruz, three weeks to complete the mural, which required 150 cans of spray paint and spending several hours a day on a scissor lift spray painting to finish.

Since moving to New York a little more than three years ago, Massa has also left his mark on a collection of Marc By Marc Jacobs handbags, participated in Bushwick Open Studios and exhibited paintings at Graphite gallery in Williamsburg, as well as at Family Business gallery in Chelsea. The mural at Williamsburg Cinema is the third wall he’s painted in Brooklyn so far–his first is in East Williamsburg at Scholes and Waterbury and depicts one of his signature square-head characters riding an iguana and lassoing some chili peppers; the second  is a blue whale entangled by the tentacles of a squid on Myrtle and Evergreen in Bushwick. 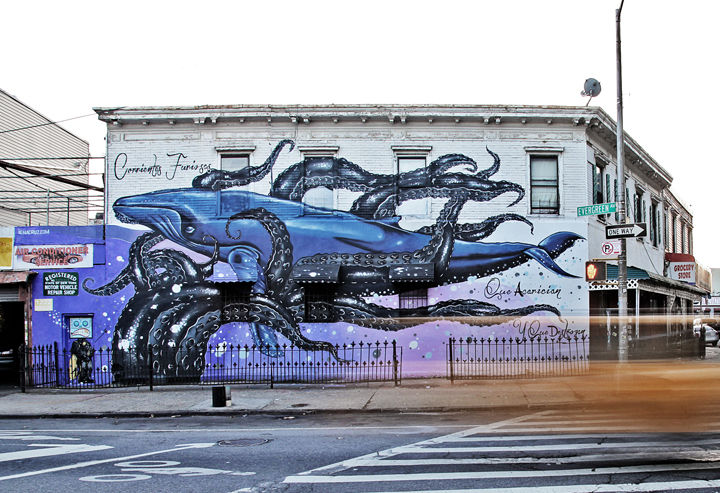 A mural of a blue whale being entangled in the tentacles of a giant squid takes up the side of a building on Evergreen and Myrtle in Bushwick. Photo: Stefano Ortega

Now that the Williamsburg Cinema wall is finished, Massa is flying to Ibiza where he’s been invited to create a mural for the Bloop Festival, an international art festival happening on the Spanish island from July 14-Aug.18. “My inspiration come[s] from the structure, from the texture, from the colors of these empty and sad surfaces. I always think about the wall project only after seeing the wall–it is the first input for my creations,” Massa says. “I have a lot of project[s] to do in my mind–we will see what happens.”