It’s a hot one this week, but if the past few evenings are any indication, the temperature after the sun goes down is much kinder, and there are a host of diverse outdoor shows to check out, from classic rock to orchestral scores for classic cinema. Take a listen to our playlist for a sampling of what’s to come during these dog days.

Oxford, Miss. duo Bass Drum of Death is heavy on vocal and guitar reverb, 1970s haircuts and a nostalgic blend of fuzz-pop and garage rock. They hit Glasslands on Tuesday in support of their self-titled sophomore record, with Brooklyn’s The So So Glos and Baked. 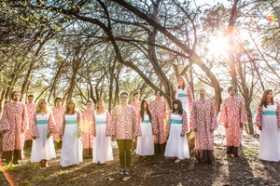 On the heels of a successful Kickstarter campaign to fund their new album, Yes, It’s True (out on Aug. 6), the 22-piece Dallas symphonic band Polyphonic Spree, which had a breakout turn on 2004’s Eternal Sunshine of the Spotless Mind soundtrack, bring more than your average kick drum and bass guitar to the stage. With flute, french horns, choir and a string section, Polyphonic Spree will test the boundaries of the stage at Music Hall of Williamsburg on Wednesday.

If, to you, Brooklyn summers are synonymous with juicy Nathan’s hot dogs, evening boardwalk strolls and white-knuckled rides on the Cyclone, head to  Coney Island and check out another summer staple: the tireless 1970s rock band Cheap Trick. The group kicks off the Marty Markowitz-approved, 35th-annual Seaside Summer Concerts series with a free show on Friday, July 12 at 7:30pm. Bring a lawn chair (or rent one for $5) and some bug spray, but leave the cooler of ice cold ales at home; this is an all-ages show and adult beverages are off-limits.

The buzz in hip-hop this week might be Jay-Z’s new album, Magna Carta Holy Grail, but Shawn Carter isn’t the only rapper in town. This Saturday, an array of hip-hop royalty and young up-and-comers will share a stage at the Brooklyn Hip-Hop Festival at Pier 5 at Brooklyn Bridge Park. Head to the park early for an all-ages block party from noon-3pm before a bevy of hip-hop headliners graces the stage, including trailblazing duo EPMD, The Clipse’s Pusha T and Wu-Tang’s Redman, and newcomers Dizzy Wright, DyMe-A-DuZin, and Brooklyn MC Danse Daimons. And check out our interview with Brooklyn Hip-Hop Festival founder Wes Jackson, along with a festival-inspired playlist perfect for these hot summer days.

Don’t miss the chance to see a living legend set the score to a film about the original undead. Philip Glass, one of the great modern composers, will conduct an original score during a screening of the 1931 Bela Lugosi classic Dracula at the Celebrate Brooklyn! Prospect Park Bandshell on Saturday. Go with a group: you’ll have to make your way home after dark. Make sure to catch violinist Kishi Bashi open the show, whose energetic tune Bright Whites off his 2012 album 151a should make its way to any summer playlist.

MoMA PS1’s Warm Up outdoor concert series puts experimental music in the spotlight. This week’s lineup features acts from up and down the east coast, including Halifax, Nova Scotia DJ Ryan Hemsworth and 17-year-old Orlando electro-pop musician XXYYXX, whose music video for About You has over 10 million views. Tickets are $15 in advance or $18 at the door, but Long Island City residents are eligible for one free ticket with proof of residence in ZIP codes 11101 and 11109. Make a day of it, and get your drink on early at The Total Long Island City Immersion.