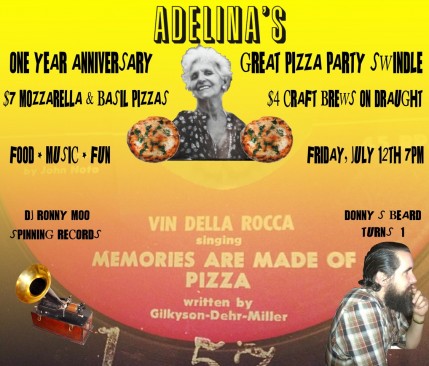 We’ve noted the abundance of live music to see around the city this summer, but what about DJ sets? In this column, we’ll explore some of Brooklyns’s best spots to get down.

DJ BZ was spinning indie rock when I walked into Greenpoint’s Italian locale, Adelina’s, last Tuesday night to check out Vinyl Tuesdays. The restaurant was cozy and not too full, exposed brick wall on one side and barrels of their on-tap wine on the other. A few people in their 20s and 30s crowd sat at wooden tables in the corner and the bar was packed, regulars chatting up their friends, our DJ and our tattooed bartender, Kate.

Adelina’s opened on the corner of Greenpoint Avenue and Leonard Street one year ago (they’re having a birthday party–with DJ–on Friday, July 12 at 7pm). Named after owner Toby Buggiani’s grandmother, the restaurant and bar serves pizzas and Italian fare made from local and organic ingredients–including a killer fried dough pie based on a Roman specialty. The bar includes a selection of 10 on-tap wines and cheaper options like $3 Genessee ($2 at happy hour!). I had the arugula, oven-roasted tomato and olive pizza. Don’t get me started on how good it was.

On Vinyl Tuesdays, locals with a record collection (both professional musicians and not) come play their tunes under a chosen theme. Past themes have included “Animal Kingdom,” “Mind, Body and Soul” and “Records I Bought at the Salvation Army.” The night was born when bartender and musician David Lackner asked a friend with a wealth of records to come play some albums for a night. The friend agreed and the following week David created “a single crappy turntable setup” for what would be the first Vinyl Tuesday. This happened in November.

Last Tuesday’s theme was, fittingly, “Records of Freedom and Power.” BZ, a local musician who also works in publishing, played everything from 50’s jazz to 60’s rock to 70’s punk and maybe even Cuban salsa. BZ would play a song, the song would end, he’d take the record off then put another on. Sometimes he’d go out for a cigarette, talk to the regulars about his choice of music then focus on changing the record again. Songs came from The Last Poets, Miles Davis, the Clash, Love (at which point someone sitting down yelled “I love Love!”) and many others.

People walked in and out of Adelina’s, those sitting at the bar checking out records played (sometimes they get passed around), others, like a group that came in around 10, grabbed a table and ordered a round of pizza. The sound of chatter was as loud as that of the music.

If you’re down for some friendly vinyl and delicious, local-ingredient pizza, check out Vinyl Tuesdays at Adelina’s. Also if you happen to have some records and you feel like playing DJ, David’s always looking for new faces–and record collections.