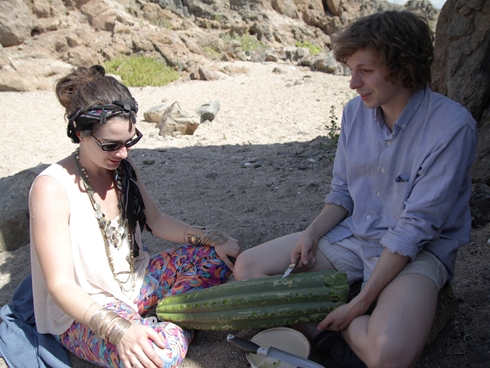 “Crystal Fairy” is turning out to be an indie dark horse that could. Photo: IFC

Considering that Crystal Fairy started out essentially as a time kill for its director/writer Sebastián Silva, during a delay in production for his Chilaen psychodrama Magic Magic, which was also released at Sundance earlier this year and stars Michael Cera, the buzz around this semi-improvised indie flick is unexpected but deserved. Maybe it’s the drug trip/road trip descriptor or Cera’s performance as an asshole American tourist in a perpetual state of oblivion about his own feculent tendencies–but Crystal Fairy is quickly becoming an indie darling, winning Silva a director’s award at Sundance and some pretty solid reviews ahead of its release today in New York and LA.

“The financing fell through for Magic Magic, so we had a window of time to do something else,” Silva says. “It’s something that was sitting on my computer desk for a long time. My friend Gaby Hoffman happened to be in New York and she had the time, so she flew over and we shot it in 12 days.”

Despite the drug references–four friends (three of whom are played by Silva’s actual brothers) set out to find a San Pedro cactus to cook and drink for its hallucinogenic properties–this is not just some stoner movie (though both hallucinations and hilarity do ensue throughout). It is really more of a film about the transformations that can occur on an odyssey, drug fueled or otherwise. The drug use on screen, as in life, is a means to an ends not the entire experience itself. What happens to Cera’s character Jamie, and his co-star Gaby Hoffmann, who plays the eponymous Crystal Fairy, is much more interesting. “These two characters need to learn and make lessons to move on in their spiritual paths, or just their human paths, to become adults and just keep growing,” Silva says.

Cera actually lived with Silva’s family for a time to learn Spanish prior to shooting the two films, in preparation for his role in Magic Magic. “So by the time we decided to make Crystal Fairy,” Silva says, “he was kind of like a younger brother to me. Michael is not the quirky, nerdy, soft-spoken guy that he plays in those movies. He’s a very smart, very ironic, funny guy that could play whatever he wants.”

The film is set in the Atacama Desert in Chile, Silva’s country of origin, though the filmmaker currently resides in Fort Greene. It’s loosely based on a similar road trip he took himself 12 years ago and a woman with the same curious moniker he met along the way, though the characters Cera and Hoffmann play are more caricatures of the actual people that inspired them.

“It’s a journey I went through myself, and I felt it was really worth sharing,” Silva says. “Though I was never as confrontational as Jamie and Crystal are in the movie.”

Personally, watching Hoffman’s portrayal of a light-hearted hippie who winds up with a not-so-happy ending is worth every overpriced penny a theater ticket costs these days. If you remember her as the girl who grew up to be Demi Moore in Now and Then, a re-introduction to the actress as an adult is entirely overdue.