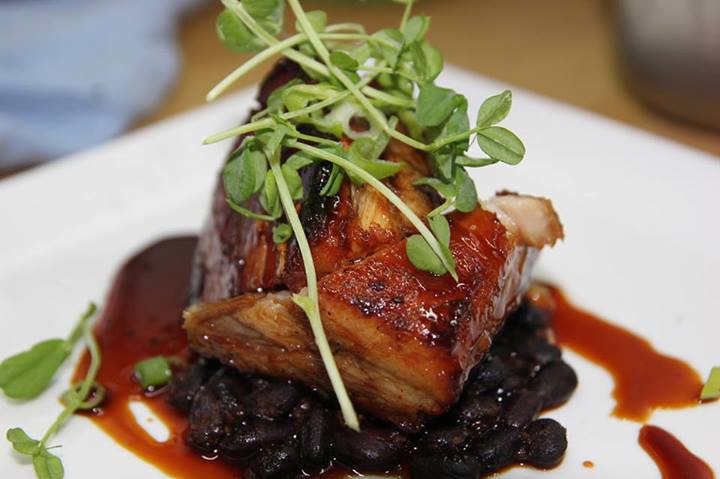 Korean pork belly with black beans is just one of the intense flavor combinations on the menu at Oxford Kitchen in Fort Greene. Photo: Oxford Kitchen

One of the summer’s less heralded openings, Oxford Kitchen debuted quietly in Fort Greene late last month, taking over the former One Greene Sushi space (same owners). I’m not sure why it’s created such little buzz, as their menu is the most enticing one I’ve read through in awhile. General Tso-style sweet breads with crispy black rice, pickled ramps and snow peas? Day boat scallops and Maya prawns over cucumber kimchi, johnny cakes and habanero-mango salsa? Ingredient overload! What’s a diner to do? My two dinner companions and I had to run through every dish and take votes before ordering.

When we settled down and found five small and large plates to share, the resulting dishes were a bit hit or miss. “Salty sweet baby beets” with shaved fennel, Mexican chocolate and goat cheese crema weren’t nearly as flavorful as that description had led us believe. But there were more hits than misses. A brilliant burger comes topped with with candied bacon, black pepper mayo, melted muenster and kimchi. Perfectly crispy fingerling potatoes cooked in duck fat fill in for fries in the duck confit poutine, and they’re using real cheese curds. I have no idea what such a dish is doing on a summertime menu, but with luscious gravy and taters like these, I’ll eat it even if it is 90 degrees. A silky pappardelle topped with Maytag Blue cheese isn’t afraid of the funk—while you might expect just a dab of blue in a dish like that, here it’s smothered in the stuff, and delightfully full of flavor.

Oxford Kitchen’s most impressive menu is actually its beer list. Serious beer nerds will be happy to find several options I haven’t seen anywhere else in Brooklyn. The bottle offerings include a nice mix of East Coast, West Coast and European brews, ranging from Philly favorite Monk’s Café’s Flemish-style sour ale to a pilsner made by Pinkus, Germany’s first organic brewery. There’s also brunch featuring oversize bloody marys and graham cracker-crusted French toast, plus a late-night menu served until 2am, with sliders, Serrano ham croquettes and that poutine.

The price tags—small plates range from $9 to $18, mains $18 to $29—won’t do much to halt complaints about the expense of Fort Greene dining (see Prospect, Roman’s, Walter’s), but based on flavor alone, Oxford Kitchen deserves a bit more buzz than it’s been getting.