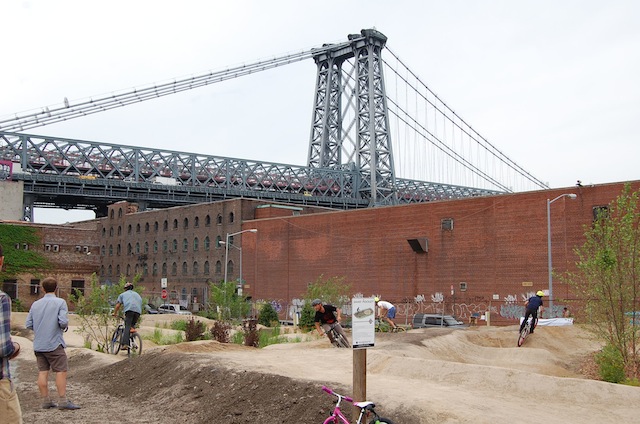 Last week Havemeyer Park and Brooklyn Bike Park opened to much ribbon cutting and fanfare inside the Domino Sugar development in South Williamsburg. The 55,000-square-foot site was completed in sections over the past few months, and the full park opened to the public on Saturday, July 13. While the parks that were promised along with the rezoning of the Williamsburg waterfront nearly a decade ago are still nowhere near completion (though Bushwick Inlet Park is much improved this summer), Kent Avenue has become a busy hub, lined with new shops and restaurants, and inundated with Smorgasburg snackers on the weekend. This new addition adds another layer to the neighborhood and pushes waterfront access south.

The parks are separated into two sections: On the eastern side is an 8,000-square-feet open lawn–plan on coming here for at least one summer sunset, or to lounge on blanket with a pick from your summer reading list or a cone from OddFellows. A smaller (and by that we mean 3,000-square-foot) playing field has been put into place for all-ages activities. Open-air libraries are apparently a thing this summer, and this new park has one, as well as a bilingual reading room. Yoga, lectures and aerobics classes are being scheduled throughout the summer, for these grassy spaces. No dates just yet, but the park’s website will have details in the coming weeks. 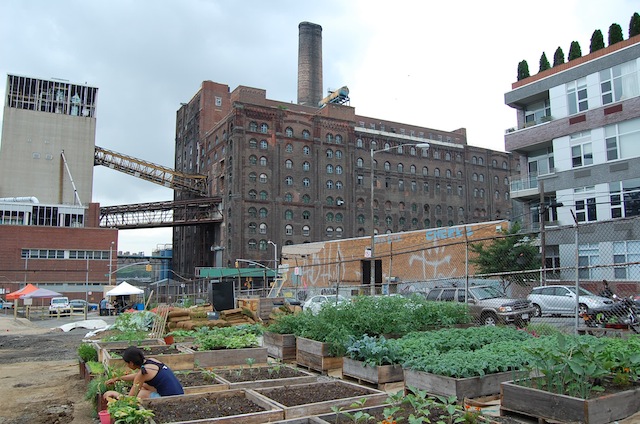 On the western side Ride Brooklyn has created the first legal, free mountain bike park of its kind in New York City. Bikes and helmets are free for kids 16-and-under, $15-an-hour for adults to rent (or $10 if you have your own helmet). A flat, oval track designed for all cyclists loops around the park, while inside the large track are stretches of mountain bike terrain for riders to hone their skills on rocks and logs, and two “pump tracks”–courses set up with rolling bumps and banked turns that you can circuit by shifting your weight instead of pedaling.

The park is temporary (though Ride Brooklyn is looking for a permanent spot for the bike park) and will eventually become a construction site for the massive residential and commercial buildings planned for the former Domino Sugar factory, but for now, parks-starved North Brooklyn has a new place to ride around and lay in the grass.
.