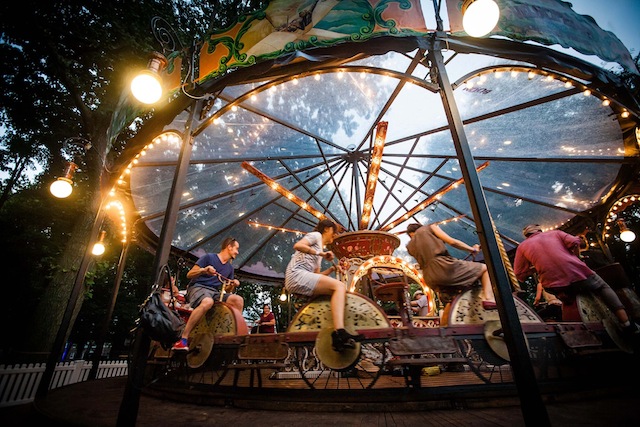 The bicycle carousel at Fête Paradiso, a throwback from the 1889 World’s Fair in Paris, now at Governors Island through September 29. Photo: Fête Paradiso

When Spiegelword came to the South Street Seaport a half dozen years ago, the 1900s-era carnival tent, brought in from Belgium, had a truly transporting effect. The vintage venue made you feel as if you’d stepped into some turn-of-the-century, European fantasy. Now Fête Paradiso has come to Governors Island to fill that old world void. The festival, which runs on weekends through September 29, offers a dozen French carnival rides from the 19th and early 20th century like a bicycle carousel, one of two still in existence. (The only other one appears in Midnight in Paris, when a wine drunk Hemingway shouts out, “Who wants to fight?”) Rides are $3 each, and a bumper car beer garden with food from Le Gamin just sweetens the appeal. While you’re there, be sure to check out Governors Island’s other attractions this summer.