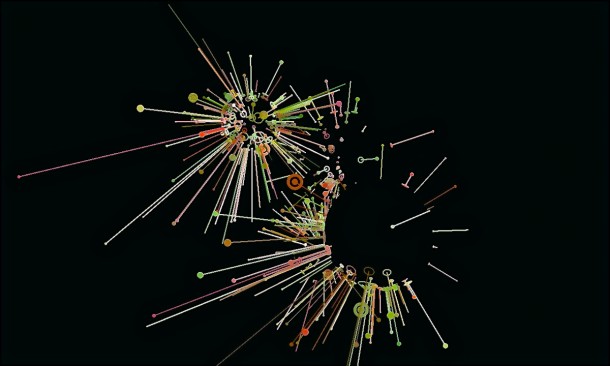 Sky Witness, the new album by Sk.eyes, is now available on Bandcamp. And check out Koonin’s Spotify playlist, below.

Clinton Hill resident Shawn Koonin used to work at the Apple Store, in a job that required him to stand all day. When he suffered a stress fracture to his foot, he couldn’t put any weight on it, and couldn’t do his job. “So I got two months off from work,” he recalls now, “which was awesome–I highly recommend it. I pretty much didn’t step foot outside of my apartment for about five weeks, except to go to the doctor like once or twice.”

But Koonin, a 34-year-old musician, made the most of his free time while recovering; he worked on a recording project, his recently-released debut, Sky Witness, under the moniker of Sk.eyes. It’s an atmospheric, mostly instrumental electronic album, influenced by Brian Eno, Depeche Mode and Vangelis.

“Most of it was recorded at that point or at least written,” Koonin says of making Sky Witness during his convalescence. “”The Farthest Reach,” [a song off the album], was pretty much done by that point. So probably 80 percent of the whole album was recorded during those five weeks. The rest of the time after that was spent doing edits and polishing things up and learning how to mix and learning how to master.”

The fact that the album was made mostly on Koonin’s computer and keyboard was a departure for him,  given that he is primarily a guitar player. In fact, the musician, who hails from New Jersey, didn’t really grow up as a fan of electronic music at all.

“When I was younger, I was the super big rock kid,” he says. “I was never against synthesizers but I just never really understood what they could do. Then eventually as I got older–having been playing guitar for so long–I bought a piano. There was this good quote I read somewhere from John Lennon about how he started to play piano because he knew how to play guitar. I bought this really old digital piano that I still have and actually did the entire record on. It was pretty much at that point that I started just getting really amazed how cool technology is. It started my path towards space rock at that point.”

The sound on Sky Witness combines subdued art rock (the haunting “Memory Decay,” the very lush “Western Himalaya,” the minimalist “Glowing Horizons”) and dance-oriented music (the infectiously techno “Shades” and “Your Epic”).  According to Koonin, the album was originally going to be all instrumental. “I really like the idea of having infinite textures at my disposal,” he says. “I always wanted to be able to create atmosphere–and all of a sudden because of computers, I can do it.”

There is a sort of moody aspect on some of the few songs on the record that do have lyrics, like “Memory Decay” and the dark “Disposable,” which sounds tailor-made for Depeche Mode.

Although the computer and keyboard were essential to this latest musical endeavor, Koonin still uses the guitar to compose songs. “If it’s not written on guitar, it’s written just on regular piano,” he says. “I kind of end up playing something and you just got to have a few notes that sound good together. The instrumental stuff–because I have an infinite palate on my computer–the way that I do it is you just get a few things going that sound cool and then you just sit there for a long time going through all these different sounds. It’s like you know what you’re looking for in your head and you’re just kind of turning the knob, so you hear what is in your head.”

Meanwhile, Koonin is already working on another project with a colleague. And now that Sky Witness has been released, is there a possibility he would perform live? “It would be so complicated and would require either buying lots of gear or having a really boring stage setup,” he says. “If I did perform this live, I wouldn’t know how to do it.” But he also doesn’t completely rule out the idea: “It would be a really cool challenge to try to play it live. If the opportunity ever came across, I think would try it.”