When a new rock documentary comes out, I expect behind-the scenes-footage, studio stills where the musicians look bored, goofy or tired, and ample live shots that work as evidence of a band’s persistent evolution. But Low Movie (How to Quit Smoking), about post-grunge softcore band Low, which screens Monday, July 29 at the Film Society of Lincoln Center, diverges from that traditional template.

Constructed from footage shot by director Philip Harder over the band’s twenty-year career, the film is a finely assembled string of music video footage, raw 16mm negatives, outtakes and some live, yet very staged, performances in an ornate cathedral in the Netherlands. A brief introduction from Harder and guitarist Alan Sparhawk and drummer Mimi Parker–Low’s husband and wife team–lends the only dialogue in the film. Otherwise, Low’s catalog provides the soundtrack, beginning with a grainy, high-contrast black and white silhouette of Sparhawk strumming and singing acoustic ode, “Death of a Salesman.” 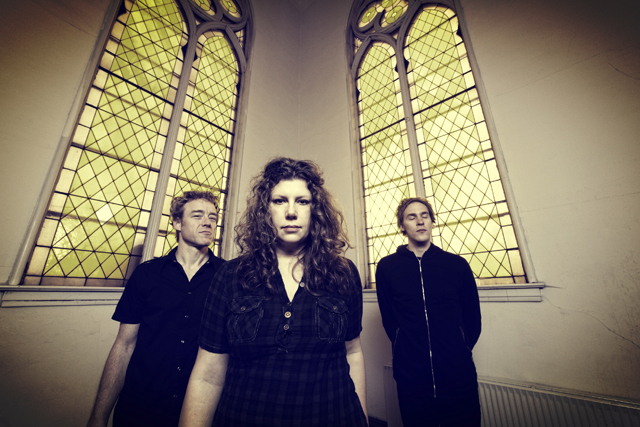 Midwest band Low gets the big screen treatment in a new documentary by director Philip Harder.

If you’re a fan of Low, this 70-minute visual trip will remind you why you liked the band in the first place. But if you find the methodical, hypnotic drone a bit numbing, 70 minutes may seem an eternity. Certain cinematic moments are striking, especially scenes of the heavily bundled band in the middle of a frozen Lake Superior in a minus 30 degree wind chill, which Harder shot shortly before the 1993 release of the band’s first album, I Could Live in Hope.

The songs and footage aren’t linear, though as the film progresses, we see the band mature: Sparhawk’s and Parker’s children begin to appear in the videos. Some images are abstract, while others are downright goofy (a cardboard robot looks forlorn and lost while it roams the streets of New York City). But a lot of the film feels lonely–a balloon salesman who fails to hock his wares; a solitary woman in a red coat in crisp white snow, making snow angels. There are also plenty of shots of Sparhawk and Parker staring despondently into space, sometimes in the middle of a crumbling room, with tattered white window curtains fluttering desperately in the wind (hey, it was the 1990s). But because the music isn’t dramatic, or energetic, or even diverse, the film and its audio can just wash over you like a tepid bath, and depending on who’s getting clean, it can either feel comforting or impenetrably dull.

But if Low is your band (or if you agree with the All Songs Considered crew that the 1990s are back), check out this Monday’s screening and Q&A with director Philip Harder. If you’re in the mood for something on the loud, colorful and frenetic side of 90s nostalgia, Broadway Idiot, a documentary about the making of Green Day’s Broadway show American Idiot, plays at Lincoln Center that same evening.