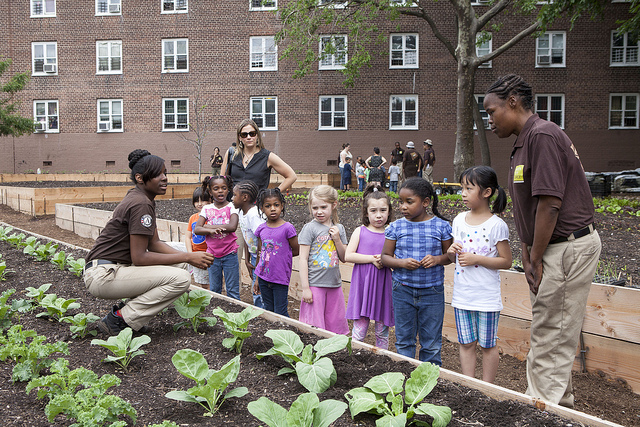 At the intersection of Otsego and Lorraine streets in Red Hook, the IKEA-bound B57 bus stops in front of US Fried Chicken & Pizza and a bodega that sells sandwiches and 99-cent bags of chips. A discount supermarket occupies the neighboring retail lot, and the garbage bins on the corner overflow with Styrofoam takeout containers and empty soda bottles.

Red Hook is one of the most underserved neighborhoods in the borough. Without direct subway access, it’s physically isolated, with little in the way of affordable, healthy food. The South Brooklyn neighborhood also includes the Red Hook Houses, the borough’s largest public housing development, where the median household income for a five-person home is just over $14,400 a year according to 2011 census data.

From proximity to price tags, fast food is easier to access than Fairway Market, but some green thumbs are working to change that.

On June 18, the Red Hook Urban Farm, a one-acre plot located within the Red Hook West Houses, became the first community farm on New York City Housing Authority property, intended as a model for additional farm sites on NYCHA land. Added Value, a local non-profit that has a nearly three-acre farm a few blocks away, oversees the growth of the farm from A to zucchini, while working closely with city organizations, including the Department of Sanitation and the Department of Parks and Recreation. 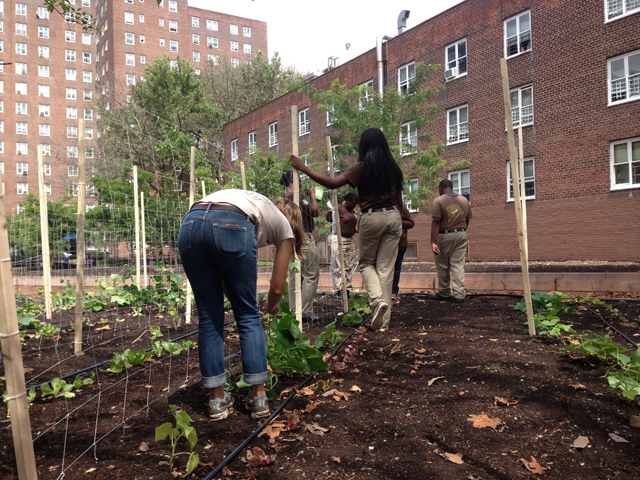 Through a partnership with Green City Force, the farm employs nine members of Urban Farm Corps, a paid, six-month job training program made up solely of public housing residents between the ages of 18 and 24. Participants in the first wave literally laid the groundwork for the project, building the raised plant beds and packing them with soil and compost. Added Value also recruits local teens to participate in a similar summer intensive program.

“The long term goal is to create a more just and sustainable Red Hook,” says Ian Marvy, co-founder and executive director of Added Value. “Within that context there’s an effort to educate and motivate people in the community to consume healthier food. There’s the work to empower young men and women to take the steps they need to be successful and do so in a way that not only doesn’t harm the planet but helps the planet.”

“Those are weeds,” she says, pointing to a leafy green stalk at the base of a tree. “If I wasn’t here, I wouldn’t know what’s weeds, what a basil looks like. Now I can just walk up, and say, ‘Oh, that’s this type of weed. Oh, that’s kale. I know what that is. I’m growing it on my farm.’”

Of the Urban Farm Corp members who finished the six-month program on Friday, August 2, one member has already received two job offers in agricultural education and another started a community garden at her own housing development in the South Bronx. But the farm doesn’t just train and employ local youth; it’s also an outdoor classroom. More than 150 elementary school students from neighboring P.S. 15 and Brooklyn New School visited the farm, and many helped transplant, tend, harvest and eat the fruits and vegetables of their labors. In a community like Red Hook, where almost 20% of the population in the Red Hook Houses has been diagnosed with diabetes, a rate nearly 10% higher than both New York City and national averages, nutritional education is a practicable method of disease prevention.

Gauging the success of the program is often anecdotal, Marvy says, and forging a strong relationship with the community is part of that. As if on cue, a senior resident of the houses strolled slowly by the farm.

Still, there is data that Added Value uses. Over 280 pounds of produce was harvested on the site, which was then donated to NYCHA residents, Urban Farm Corps members and food pantries.

“We can kind of see ripples,” says Gwen Hill, Added Value’s NYCHA farm coordinator. “People’s parents are calling and being like, ‘Can you harvest us some collard greens for dinner?’ which is really cool.”

As the farm’s first summer season winds down, Hill is already thinking about improving the program’s food distribution methods. She hopes to get more food into the kitchens of Red Hook residents who need it, which could mean setting up produce markets or distributing through the Red Hook Houses’ senior center.

“We have some senior citizens who come by like a few times a week, and they’re like, ‘Do you have anything for us?’” Hill says. “We harvest them food and that’s cute and adorable and lovely, but we want to be able to do it on a bigger scale than that because we have so much food here.”