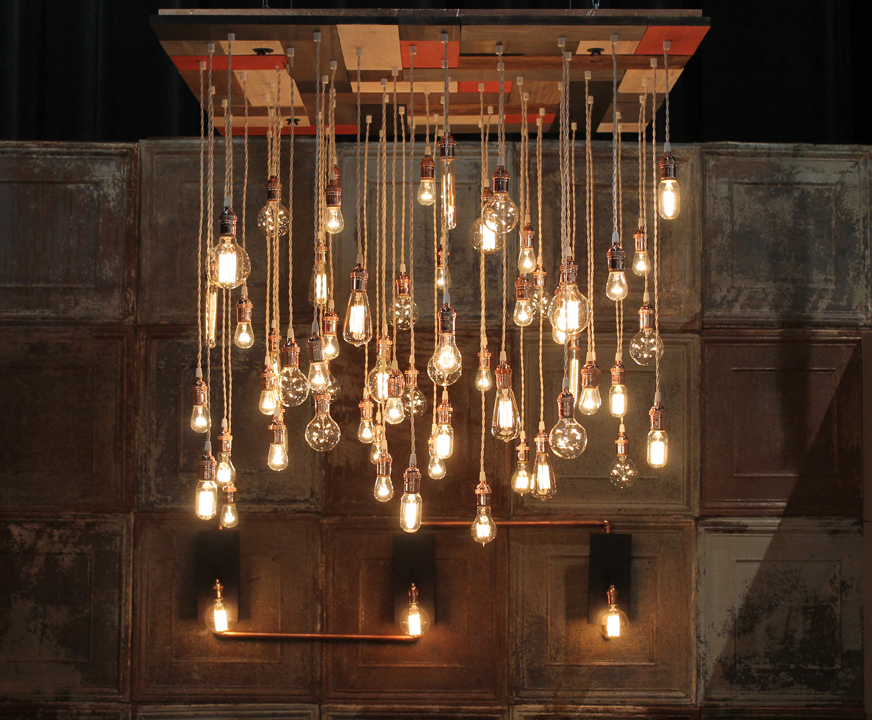 Cassidy Brush grew her business out of her Battery Park bathroom before moving her operation over the East River to a studio by the Brooklyn Navy Yards. Photo: Urban Chandy

Brooklyn is full of makers and designers responsible for creating more than a few objects that have caught our attention as of late. Some are obscure, others ingenious–all are definitely awesome and left us wondering: Who made that? We’ve decided to start finding out the back story behind some of these inventions, and to share the tales of how they came to be, in a new series on BB. Last week we talked to Cassidy Brush, the creator of Urban Chandy, who’s sparked something big with her chandelier business.

Cassidy Brush is originally from outside Dallas, but her Texas twang was barely audible on a recent afternoon at her design-build studio near the Brooklyn Navy Yard. Her enthusiasm for electrical wiring, however, was effusive from the start.

Brush is the owner of Urban Chandy, a chandelier company that specializes in pendant light fixtures, which she started almost two years ago after a customer at a different business venture in DUMBO made her an offer she couldn’t refuse. “I had an office over at 10 Jay St., and I was pedaling independent designer goods–I’d come from the apparel industry, doing wholesale sales and business development–my office had all florescent lighting and I thought ‘This is terrible,’ so I made my own light from plywood I found in the trash–DUMBO has really good trash–people would come in to shop all the time and ask ‘How much is this light?’ It took this very pushy lady from Brooklyn Heights that was like ‘I’m going to send my husband over..money is no object,’ for me to be like, ‘OK, I can make another light.’ I decided to put it on Etsy, and before I knew it, I was only making chandeliers.”

After building chandies in the bathtub of her Battery Park apartment for a year, Brush took over her space on Grand Street just before Hurricane Sandy–she, her husband, daughter and dog Buster now live in Carroll Gardens. “I had wood and random junk I was going to make into a chandelier stuffed into every piece of furniture and under the bed,” Brush says. “I would take a plastic drop cloth and put it in the tub and stand on either side and then put the wood across the tub and drill down into it. All I’d have to do is roll it up so it wouldn’t clog the drain.” Recalling Urban Chandy’s early days while standing in her new space was enough to make her muse, “This is way better.”

Besides being better than bending over your bathtub trying to thread electrical wires through a piece of salvaged wood, Brush’s new studio is now necessary, as she’s seen her business grow exponentially is the past year. “In the first year we made over 300, which was insane” Brush says. “This year we have already hit our numbers from last year before mid-year. I’ve lost count. Thanks goodness we have this space, and Katie.”

The Katie, Brush is referring to is Katie Mecsics, her second in command when it comes to chandeliers. “I don’t know what I’d do without her,” says Brush, especially with business booming.

An average Urban Chandy involves a piece of small, medium or large salvaged wood with an average of 18 pendant lights strung through it, but the day I spoke to Brush, she and Mecsics were building a custom chandy with closer to double that. It was on its way to Wisconsin once they finished. Brush makes chandies out of everything from scaffolding to floor boards to old doors and cross sections of felled trees. “We get requests for more and more, bigger and bigger pieces,” Brush says. “So whenever we find bigger pieces [of wood], I keep them in whatever shape they are, as long as we can fit them in some sort of vehicle.”

Brush says for the most part all her chandeliers are custom orders, starting at $175, and people can get ideas of what they like looking at images on her Etsy site. “Even something we’ve already done before, we’ll customize to fit someone’s space, so if they see a picture and say ‘Oh I like that, but could you make it longer, shorter, wider,’ we always do.” Brush says. “Because we’re using salvaged wood it’s easy for us to customize it with no extra cost.” Most of her woods comes from Texas, but she also gets pieces from Build It Green! NYC in Gowanus where she’s teaching workshops on chandelier design on Sept. 7, as well as a two-day intensive Design Your Own Chandie class on Oct. 15-16 at which attendees can pick out their own wood and accents.

“If you had told me even a year and a half ago that I would be at this point with this, I would have said ‘Yeah right. No way,'” Brush says. “We were laughing the day after Christmas because my mother-in-law and I were having a conversation about shopping and says, and I’ve never been one to hit after-holiday sales, but we were sitting there and I was thinking: ‘I wonder if the drills are on sale at Home Depot?'”