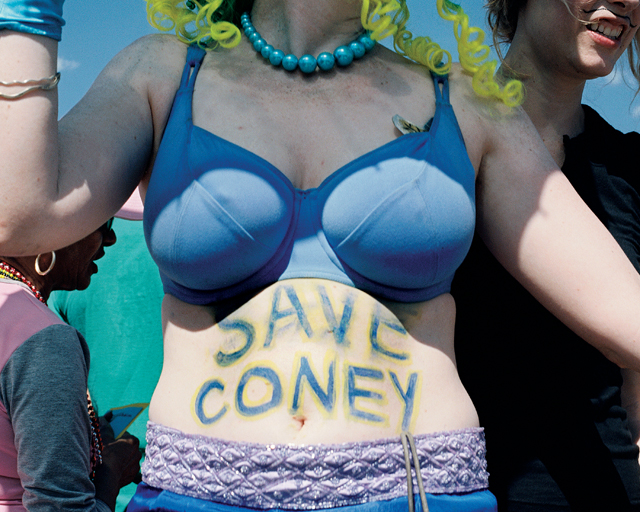 It’s a classic David-versus-Goliath tale, but with a boardwalk, mermaids and circus sideshows.

Over the past few years Coney Island staples, some seedy, some classic, like Astroland Park, Shoot the Freak and the Zipper, have been replaced by the pricey new Luna Park. Meanwhile, weeds have sprouted in vacant lots while corporate developer Thor Equities has snatched up beachfront property like penny candy to lure big box retailers and luxury condos to the Brooklyn beach. The Coney Island that belonged to Beer Island, the World’s Smallest Woman and The Warriors has started to fade.

All this is lovingly captured in director Amy Nicholson’s latest documentary, Zipper: Coney Island’s Last Wild Ride, which begins a five-day engagement at the IFC Center on Friday, Aug. 9. (UPDATE–The run at the IFC has been extended through Aug. 22.) The film traces the lengthy land dispute over Coney Island’s amusement district through the story of the ill-fated Zipper ride and its longtime owner and Coney Island native, Eddie Miranda. Starting his boardwalk career as a ride operator at age 11, Miranda sold his last tickets in 2007, when the lot the Zipper occupied was sold and Miranda unloaded the ride to an amusement park in Honduras.

Like many of us, Nicholson learned of Coney Island’s fate in The Daily News. “There was this big article with Eddie,” said Nicholson, who spent summers twirling on a Zipper in Ocean City, MD (the ride is a popular attraction at carnivals and country fairs across the country, as well as in Canada, Australia and New Zealand.) “I loved the Zipper when I was a kid! It just reminded me of my childhood.”

Nicholson started work on a short film about the long-standing attraction, and hired friend Carole Ryavec as a researcher. As Ryavec pulled more and more complex information about Coney Island’s messy land disputes and complicated zoning, Nicholson realized there was more to the story than $5 tickets and gravity-defying rides. Amidst the aroma of sizzling hot dogs and the din of arcade sirens was a battle between private developers and city officials over land that amusement owners, employees and Coney Island residents felt belonged to the people who had long kept the district buzzing.

Coney Island’s zoning woes are similar to those in Downtown Brooklyn and the Williamsburg waterfront, where private development of luxury apartments, hotels and retail space forced out longtime residents and shop owners. But Nicholson’s film exposes the unique land use issues in Coney Island’s shrinking amusement district, which is specifically zoned for carnival-like facilities, not big box retailers or opulent hotels.

Watch the Zipper trailer from Amy Nicholson on Vimeo>>>

Zipper is both a beautifully shot portrait of a fading culture, thanks in part to director of photography Jerry Risius, and a digestible account of land use, economic development and city politics under the Bloomberg administration, with a memorable cast of characters, from city council members in suits and ties to Coney Island mermaids in glitter and sequins.

The Zipper is just one casualty of the land dispute between the city and Thor Equities, just as Coney Island is one neighborhood in a rapidly gentrifying New York. Nicholson, who lives on 12th Street in Manhattan, blocks from the apartment complexes that rise where St. Vincent’s Hospital used to sit, worries about the irretrievable cost of broad development.

“If I walk out the door in Union Square, which is three blocks from me, it looks like anywhere. Anywhere. I turn around there and it’s Babies “R” Us and Designer Shoe Warehouse and Whole Foods,” Nicholson says. “At some point you really do sort of wonder about, you know, the authenticity and sense of place and things like that. I’ve become very aware of them and I think that those things are really impossible to put a price on.”