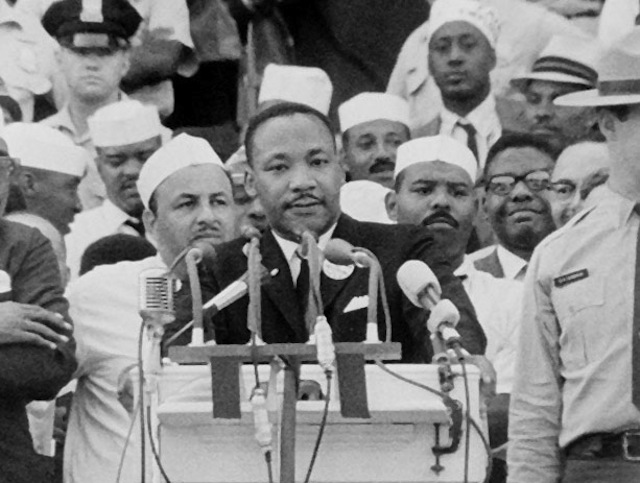 BAM kicks off is film series, A Time for Burning: Cinema of the Civil Rights Movement, tonight with a screening of Martin Luther King Jr.’s impact on the era. Photo: BAM

To commemorate the 50th anniversary of the March on Washington, BAM is screening 40 films from the Civil Rights era, starting today through Aug. 28, as part of a new series, A Time for Burning: Cinema of the Civil Rights Movement. It is the largest collection of documentary, Hollywood and indie films from the era–from  just before Martin Luther King Jr. made his iconic I Have a Dream speech on the steps of the Lincoln Memorial on Aug. 28, 1963 through the tumultuous period that followed, sourced from 28 private film and television archives, collectors, studios and public libraries.

Two weeks ago, I attended a press screening of Crisis, as well as The Children Were Watching (1961), which covers the backlash against desegregation of public schools in New Orleans and the modeling effect behavior (in this case bigotry) on the part of parents can have on kids. I couldn’t help but see the culturally significant symmetry between the questions of racial equality that the film raised back then and today’s gay rights movement–which adds a timely element to the film series for anyone still questioning history’s ability to repeat itself.

As much as the Civil Rights Movement is covered in history classes in this country, nothing compares to seeing live footage from the era, and even those who lived through the 1960s will get of glimpse of sides of the struggle they hadn’t seen before. JFK sitting in a rocking chair in the Oval Office while his staff briefs him on the scenarios likely to unfold during the desegregation of the University of Alabama is more poignant and informative than any pop quiz ever could be.

The living documentation of one of the most divisive periods in our nation’s history is hard to watch at times, heartbreaking at others, but there are also moments of humor. Listening to Robert F. Kennedy, then the U.S. Attorney General, articulate, in his famous New England accent, his thoughts on whether to physically pick up and move Alabama Governor George Wallace or just “have five or six guys push him aside” so Vivian Malone and James Hood, the first black students to attend the all-white state school, could register for classes, adds an unintentionally light-hearted and human element to an otherwise historically harrowing event. In another clip one of RFK’s children interrupts the Attorney General’s phone call with Deputy U.S. Attorney General Nicholas Katzenbach, the man tasked with escorting Malone up the university steps, just to say “hi.” Both clips are part of Crisis: Behind a Presidential Commitment (1963), which screens on Aug. 16 and offers viewers a behind-the-scenes look at the days and decisions leading up to JFK formally making racial equality part of his presidential platform.

Other films in the series focus less on white America’s response to Civil Rights and more on the perspective of black people from the period, as is the case in Black Natchez (1965). The 62-minute documentary, directed by Edward Pincus puts viewers in the throws of the segregated Deep South–Natchez, Miss.–as the town’s black community continues to petition for, and be denied, voting rights. A car bombing of the local NAACP leader sparks a divide in the community between those calling for peaceful negotiation and those advocating for militant action. With no script, narration or interviews, the film offers a first-person record of the thoughts and feelings of a community entrenched in a fight for equality. It was enough to make me put down my bag of popcorn and want to pick up a box of Kleenex (or a protest sign). Whether you’re moved to tears or moved to action, the film series is sure to inspire emotions of all kinds.

A Time for Burning starts tonight with the screening of King: A Filmed Record…Montgomery to Memphis. The 180-minute film was originally released in 1970 as a one-night-only presentation. It chronicles Dr. King’s rise and untimely fall as a Civil Rights leader. The showing starts at 7:30pm, and tickets are still available here.