Has any cuisine expanded its Brooklyn presence in recent years more than barbecue? Last year BrisketTown, Fletcher’s and Fort Reno opened, joining established spots like Fette Sau. But the slow-cooked meat scene shows no signs of slowing down here. Introducing eight new, revamped or soon-to-open ways to get your fill of Brooklyn barbecue. 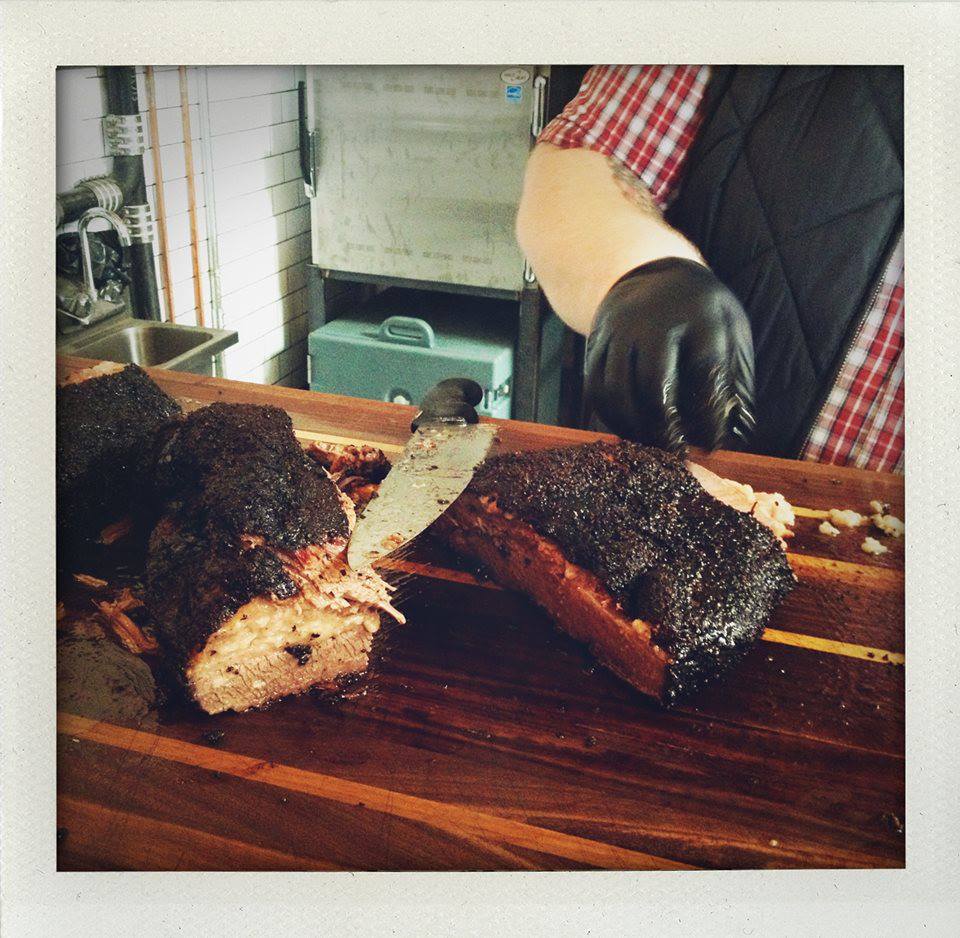 Hometown’s menu is a mix of Brooklyn cultural influences, like Caribbean jerk chicken and traditional Texas style barbecue like this brisket above. Photo: Hometown BBQ

RED HOOK–Borough-born pitmaster Billy Durney was preparing to open his Red Hook restaurant around this time last year, and while Sandy pushed things back significantly, Hometown BBQ is now finally ready to go, with plans to start serving by the end of August. We got an advance taste of Durney’s Brooklyn-style BBQ, which melds cultural influences culled from his experience growing up in Old Mill Basin. That includes Vietnamese flavors in a lamb belly bahn mi, a modified take on Caribbean jerk chicken, and an amazingly juicy jalapeño-cheddar sausage made for Hometown at nearby Paisano’s meat market, then topped with a housemade mustard and Brooklyn Brine pickles. There’s also more traditional Texas and Carolina-style BBQ to be had, including tender pork ribs, brisket and pork shoulder. Located directly across from Fairway, the large, casual space is outfitted with salvaged 150-year-old hemlock wood, faded American flags and Christmas lights strewn above Edison bulbs for a VFW hall meets hipsterville look. Throw in live music and a full bar, and it’s easy to see how Hometown will reel in the crowds. 454 Van  Brunt St. (between Reed & Beard sts.), 347-294-4644

PROSPECT HEIGHTS–This newcomer near Barclays Center is also set to join the BBQ party by month’s end. The Texas-style oak-smoked meats, available as sandwiches or platters, will include brisket, ribs, pulled pork, chicken, turkey and sausage along with sweets like bourbon pecan pie. The prime attraction looks to be the sizable Flatbush Avenue patio–a nice spot to enjoy some outdoor drinks and ‘cue before an arena visit. And perhaps even more exciting is that the same owners will simultaneously open a second Brooklyn branch of The Elbow Room next door, serving top-notch mac-and-cheese from a street-facing window, making this intersection the borough’s new comfort food corner. 267 Flatbush Ave. (at St. Marks Ave.)

WILLIAMSBURG–North Brooklyn’s leading purveyor of Malaysian-influenced BBQ reopened with a spruced-up space this spring, adding some new menu items like ‘Cue Bacon–a deliciously fatty slice of tender pork belly topped with apple-cucumber salad and mint. There’s also a new cocktail menu from Phil Ward (who has worked behind the bars at Death and Co. and Pegu Club). Drinks like a Fatty Manhattan, with bacon-infused bourbon, are $10 on the late-night menu, served from midnight to 2am. There’s also a new outdoor area that has been hosting weekly “Smoked Out Sundays” where $35 gets you unlimited beers along with whatever meats they’re cooking up that afternoon. 91 S. 6th St. (between Berry & Bedford), 718-599-3090 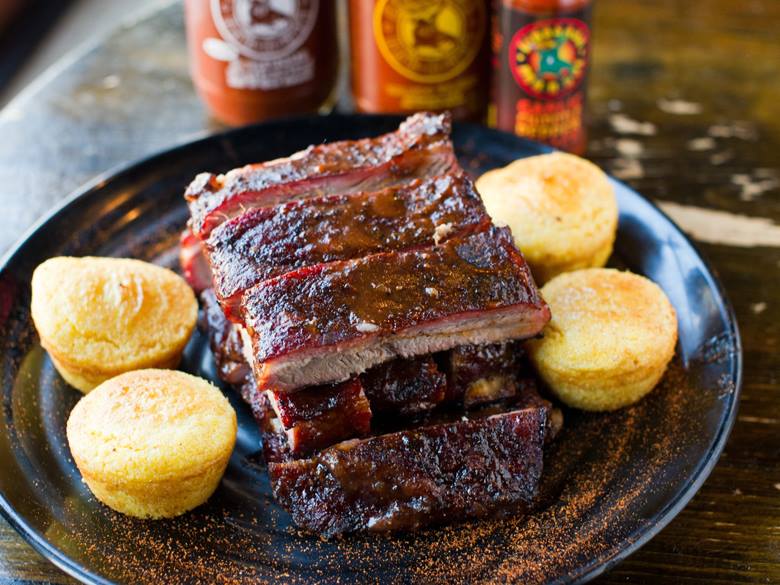 Dinosaur BBQ is cooking meat around the clock to keep up with the demand for its Syracuse-style ‘cue. Grab a rack, but save room for some cornbread. Photo: Dinosaur BBQ 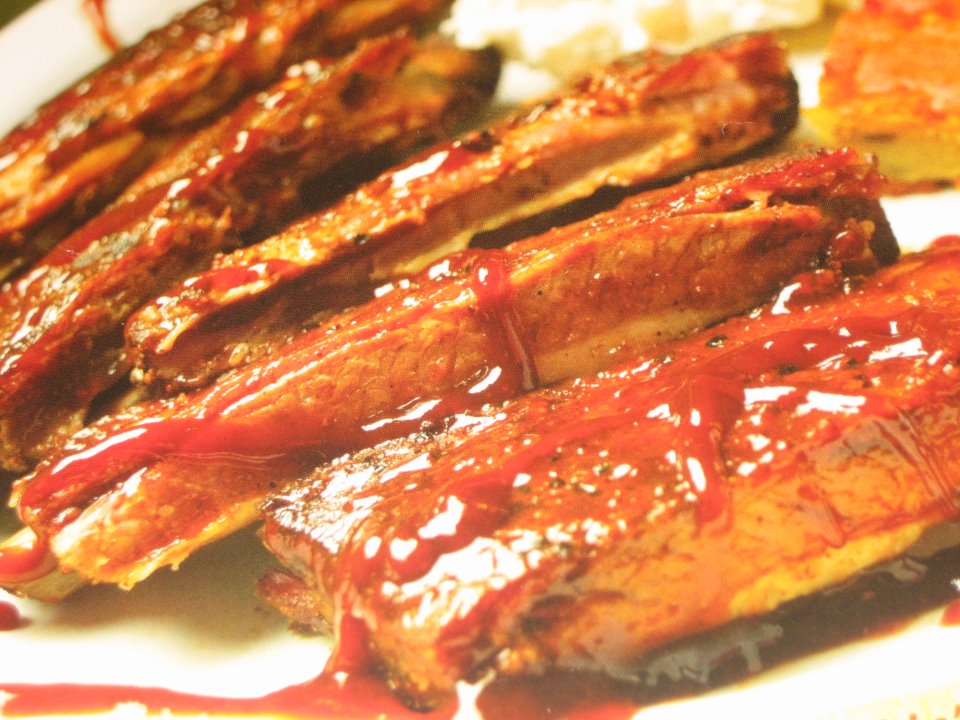 G. Lee’s will stick to the classics when it opens in Crown Heights next month. Photo: G. Lee’s

CROWN HEIGHTS–Forget the fusion ‘cue and New York mashups. This sooon-to-open Crown Heights space, set to debut in September, is keeping it old-school with a classic Texas and Southern menu, including baby back ribs, pulled pork and brisket, plus Louisiana-style po’ boys and a full bar. 813 Nostrand Avenue

6. Blues and ‘Cues: Beast of Bourbon

BED-STUY–Also coming later this year (no date set yet) is this 6,000-square-foot Bed-Stuy spot from the owner of nearby Black Swan. Look for locally sourced meats, 50 beers on tap and live music. 708 Myrtle Ave. (between Spencer & Walworth sts.)

DOWNTOWN BROOKLYN–This Austin-to-NYC transplant expands across the East River this fall with a massive new location just off the Fulton Mall. Its signature dry-rub meats will be accompanied by an outpost of the deliciously crispy fried Hill Country Chicken as well. 345 Adams Street

If that ain’t enough pork for you, head up to the Catskills this weekend for summer’s definitive slow-cooked festival. On Aug. 24, the Pig Mountain extravaganza in Narrowsburg, New York features 14 whole-roasted pigs from 14 different chefs, including Andres Valbuena of Fort Greene’s Martha (which was once Brooklyn Sandwich Society–the recent name change is intended to signal that they’ve got skills beyond sandwiches), all for one $30-ticket.