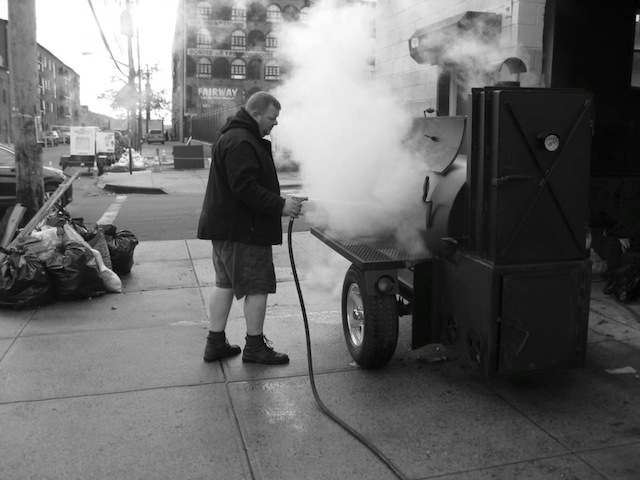 Delayed almost a year by Hurricane Sandy, William Durney is ready to bring his twist on barbecue to Red Hook. Photo: Hometown BBQ

When the floodwaters from Hurricane Sandy receded from Red Hook last fall, it wasn’t just neighborhood favorites like Red Hook Lobster Pound, Bait and Tackle and Fort Defiance that suffered setbacks from the storm. Nearly a year later, a number of restaurants that were weeks away from opening when the storm hit are finally ready to join the area’s once-again thriving food scene.

We learned about the brisket and imminent opening of Hometown BBQ in  yesterday’s Brooklyn BBQ roundup, but what it took owner William Durney to get his eatery up and running is another story in itself. He’s part of a new wave of Red Hook restaurateurs—that includes Erin Norris of Grindhaus, Eric Finkelstein and Matt Ross of Court Street Grocers and Frank Castronovo and Frank Falcinelli of Res, an event space and chef’s residency concept that’s still under wraps on Columbia Street—stalled by Sandy but set to open in the next few weeks.

Five weeks after Durney began renovations on a former woodworking shop across from Fairway on Reed Street, Hurricane Sandy filled the space with six feet of water.“I was so distraught, I didn’t know what to do with myself,” he says.

With his opening plans now a wash, he found himself cooking 5,000 pounds of meat for 16 to 18 hours a day on his Lang smoker in the weeks after the storm to feed the many in the area without power—the smoker was the only thing in the space to survive Sandy. Durney’s friend Mike Mendoza, who owns Toby’s Public House, had donated 500 lbs. of meat to Durney to smoke, and soon Fairway and other local businesses were donating meat as well. Partnering with Red Hook Initiative, Durney was greeted at food distribution outlets as the Rib Man, bringing barbecue to the neighborhood and to other affected areas, including Far Rockaway.

On a normal rainy day, the Hometown building had leaked, so the space required extensive renovation, including waterproofing and a new plumbing and electrical system. They’ve also added post-hurricane precautions to their original build-out, including high-placed electrical boxes and equipment on casters. “We learned our lesson,” Durney says.

Hometown is set to open by month’s end, and Durney, who grew up with Caribbean and Asian flavors in Old Mill Basin, will serve Texas-style beef ribs, brisket and sides, with a few twists on tradition, like charred jerk chicken and a lamb belly bánh mi that reflect those roots. “I wanted to send some love to the areas I grew up with,” he says.

Hometown wasn’t the only restaurant opening set back considerably by the storm. The opening of Grindhaus, which owner Erin Norris had been working on since 2008, was a few months away when Hurricane Sandy flooded the basement and part of the ground level and destroyed the backyard, the electrical system and kitchen equipment. After a Kickstarter campaign that raised nearly $20,000, Norris is finally set to open by the end of September. While Norris and chef Zach Barrow are still finalizing the menu, she says, “There will always be a sausage.” Some may remember Norris from the Red Hook Mercado, a now-closed outdoor flea/food market, where she sold her mini corndogs called “Little Bitches,” filled with spicy weisswurst from The Meat Hook. 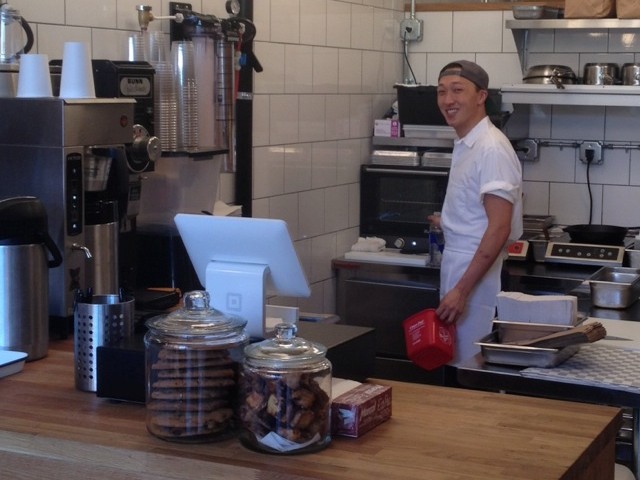 Three blocks from Grindhaus, down on Sullivan Street, you’ll find Finkelstein and Ross’ new outpost. The Red Hook kitchen serves as a commissary for the prepared foods at the Court Street food shop, and serves a sandwich-centric menu of its own. With the exception of the Italian combo, the sandwich selection is completely different from day to day. One of chef’s Joey Chmiko’s most popular creations is the Smoke Thief, made with Heritage pork shoulder that gets its smoke from bacon fat, and is served with vinegar slaw, bread-and-butter pickles and barbecue sauce.

The ripple effects of support were felt long after water levels went down Durney says. “This neighborhood has a huge heart and everybody came together after Sandy, embraced each other, helped each other, as far as rebuilding, giving each other hugs,” he says. “It makes it an easy place to hang your hat.”