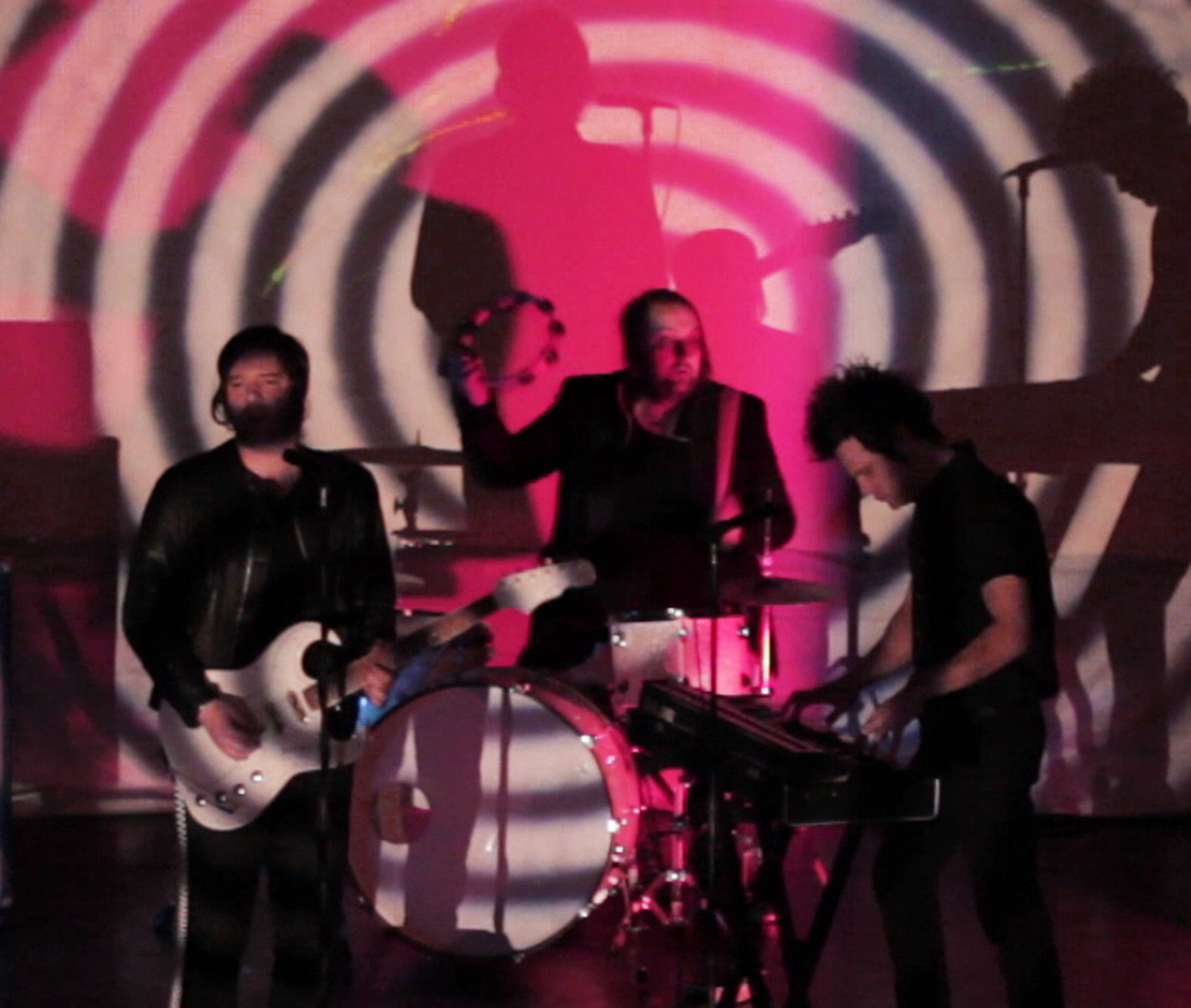 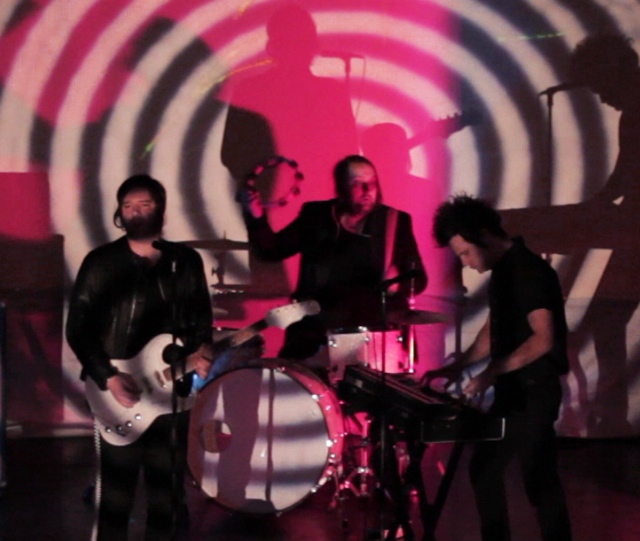 If you can imagine an amalgam of the Velvet Underground, the Jesus and Mary Chain and ’90s Brit shoegazing groups, then you have a really good idea what the music of the Brooklyn dream pop outfit Heaven sounds like. Mention those references to the band’s singer and guitarist Matt Sumrow and he would agree with you.

“I lucked out when I was in high school, falling into some really good underground music at a really young age,” he told me recently as the band was in the midst of a headlining tour. “So I feel that definitely inspired me. By the age of 14 or 15, I had Spaceman 3 records, My Bloody Valentine records, early Verve records, Spiritualized, all that kind of stuff I was really into–but also the all ’60s stuff like the Beatles and the Who.”

All of those influences–marked by some shimmering guitar, detached vocals, and trippy, almost drone-like, atmospherics–can be found on Heaven’s fine debut, Telepathic Love, which was released in July. The album had been in the works ever since the band formed in 2010. “We’ve just been sort of sitting on them [and] waiting for the right time to put it out,” says Matt. “We didn’t want to put it out ourselves. It definitely sounds like a concept record.”

How Heaven–Matt, Mikey Jones and Ryan Lee Dunlap–started out could also be described as more concept than band. Prior to going into Stratosphere Studios in Chelsea to record the songs for Telepathic Love, the band members had not even performed live together.

“A lot of them were written on acoustic guitar–sitting in your bedroom just playing acoustic guitar,” says Matt. “Definitely the recordings are representations of that–of just not yet being a live band but making songs into the studio. We kind of had an equation we were going with where we only used bass guitar if we had to. Then we wanted there to be two-guy vocals–guy harmonies the whole time as much as possible. That and then the simple drums or the strong beat behind it, and guitar. That was kind of the equation. So we went in and did that.”

The majority of Telepathic Love is dreamy and melodic; the album’s the first single, “Color in the Whites of Your Eyes,” poses the question of what would happen if the Velvets were produced by Phil Spector. Lyrically, the song addresses an aspect of Matt’s personal life. “The song is about an old girlfriend that I was breaking up with but still want to hold on to what was pure about the relationship,” he says.

Yet another song, “Once the Heartbreak” breaks the subdued mood with sonic aggression highlighted by some fuzz-laden guitar. “I recorded 30 minutes of guitar feedback,” Matt says. “I went in there and pressed record, I had three amps set up, all the different sounds and just got crazy noisy. I had the buzz pedal and distortion pedal go haywire, and then what happened was we layered them on top of each other, you’d pretty much just cut it up, and then layered it on top so it’s just this wall of feedback, kind of akin to a Phil Spector “Wall of Sound” [production] but done in a feedback stack way.” 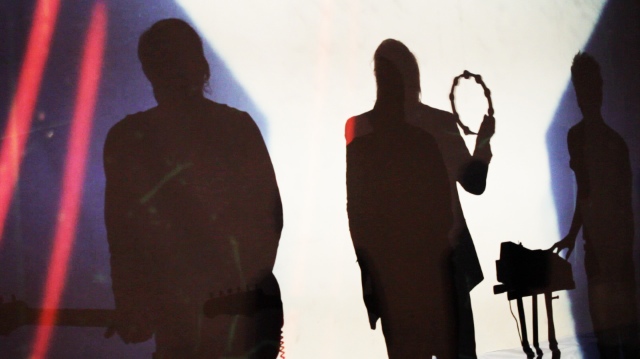 If you come away from listening to this record feeling a somewhat dark romantic vibe, you wouldn’t be off the mark. “I think most of the songs are kind of like love songs,” says Matt. “And the sound of the band and everything is kind of dreamy. It’s just kind of where we’re going coupled up with love songs. I love those ’60s love songs–the era of music when songwriting was paramount, stuff like that. I would say that’s a current, a thread that ‘s running through a lot of it.”

Although Heaven is relatively a new band, Matt and Mikey have collectively logged in experience through collaborations with Dean and Britta, Snowden and Swervedriver. The two met while working on music with Adam Franklin, of Swervedriver, for Bolts of Melody, his other group. “Mikey and I played bass and drums respectively on the recording [“I Can Sleep for a Thousand Years”],” Matt says. “We had the same tastes in music. We’ve both been supporting other artists over the years, playing other people’s songs and touring. We both were kind of on the same page…and have our own vision for once.”

Matt is originally from North Carolina. When the Comas, a Chapel Hill band he used to play in relocated to New York he ended up here. “We did all that we can do in North Carolina, and needed a change,” says Matt, who now resides in Greenpoint. “We signed a new record deal and moved to New York. That band had only lasted a couple of years after being up here. Right after them, I started playing with Dean and Britta, and then started Heaven not too long. So that’s why I moved up here, it was music.”

Heaven is aiming for more live dates in October, including possibly one or two in New York. “Internationally, we’re trying to work on getting the record out in England hopefully,” says Matt. “That’ll probably be something that will happen next year. I’m in talks with a promoter in Canada about maybe doing some Canada dates. The record just came out, so it’s all kind of early at this point, but we’re hoping for sure to be able to take the music abroad and into the West Coast.”

Matt is already thinking about the next Heaven record. “We’re already starting to right new material and hopefully go back in the studio this winter. I want to get another record out next year. So everything is in motion.”