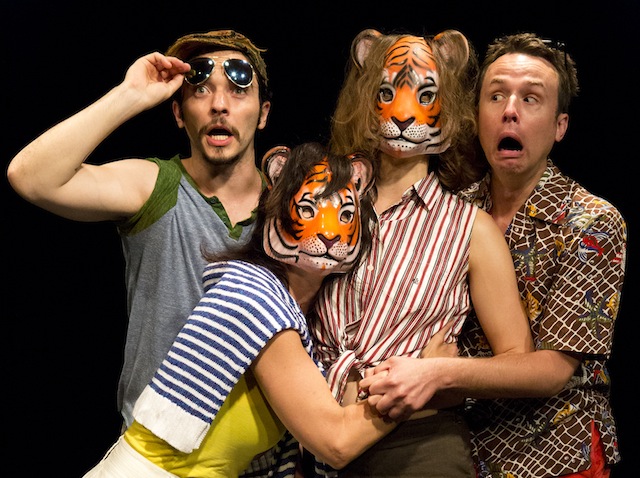 On a boat and unable to escape each other, a family must confront its own conflicts in “The Boat in the Tiger Suit,” which ends its run at the Brick Theater on Saturday. Photo: Brick

There’s nothing like being trapped in a cramped space to bring out uncomfortable secrets. Make those people family after a father’s death, and that space a boat, and well, it’s the emotional and familial version of the ill-fated Carnival Cruise ship that made headlines earlier this year.

The tight, inescapable space of The Boat in the Tiger Suit, a play by Hank Willenbrink now at the Brick Theater in Williamsburg, is a boat hosting Herman’s (Hugh Sinclair) funeral. Herman left his family years before to join the army, leaving his wife, Margaret (Maggie Bofil), and his children, Rene (Nic Grelli), and April (Diana Stahl), perplexed and resentful as they attempt to make sense out of their father’s life and death.

Surrounding the casket, like the sinister negatives of a Norman Rockwell portrait, are Margaret and her children, along with April’s husband David (Brian McManamon). Stahl and McManamon play well off each other as high school sweethearts who married young and are questioning whether that was such a great decision.

McManamon is cringingly hilarious as David, the kind of well-meaning person who even at a funeral contracts sudden onset foot-in-mouth disease and make offensive remarks to Gene (Bobby Plascencia), the casket’s army color guard and Herman’s army buddy, regarding Latin American funeral traditions that he’s seen on some documentary and his own decision to join the army. Margaret is determined to make her family participate in the funeral, and seeing as they can’t get off the boat, the remaining characters make and break various allegiances with each other in effort to make sense of their pasts, Herman’s death, and more immediately, get through the funeral.

The play is quickly paced and tightly written, though I found myself wishing that the best parts, like Grelli’s quivering eyes and voice that betray the feeling behind his protective sarcasm, the relationship between Rene and April who are twins, and the burgeoning romance between Rene and Gene that’s more believable in the looks they give each other before they’re a couple then the fizzling chemistry when they’re supposed to be together, were played up more. As the walking dead, Herman even makes some appearances to explain his actions, though only in tantalizing frustratingly short visits, never quite long enough to truly provide real answers.

It’s a compelling story that pulls the curtain back on the uncomfortable truths that death reveals. I just wish there was more time and room for those truths to not only be quickly revealed, but also explored.

The Boat in the Tiger Suit is at the Brick Theater August 29-31st at 8pm. More information at Bricktheater.com.