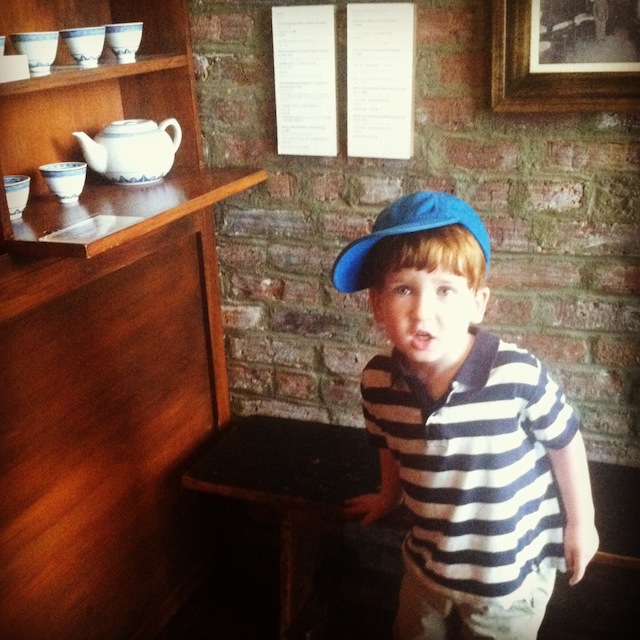 A tea set at the Museum of Chinese in America, not necessarily for the playing. Credit: Meredith Craig de Pietro

The best thing about living in New York City is the diverse neighborhoods that allow you to get lost, hear other languages, and investigate new cultures. That’s part of why we continue to live here and raise our child amidst steep rents and even steeper preschool costs. So this week I decided to take my son to Chinatown and visit the Museum of Chinese in America.

Currently, there are two compatible temporary exhibits on display about fashion. “Front Row: Chinese American Designers” is an extremely thorough celebration of the Chinese American fashion industry. Well established designers like Vera Wang and Anna Sui are represented, as well as youngbloods like Jason Wu and Mary Ping (who guest-curated the show). Videos of the designers talking about their experiences adorn the walls and mannequins are front and center displaying the gorgeous and often elaborate clothes. The other exhibit, “Shanghai Glamour: New Women 1910-1940” is a nice companion piece. A hallway of breathtaking silk garments, posters and other artifacts are an intriguing time capsule of Shanghai, “the Paris of the East.”

This is a thrilling exhibit for moms who love fashion, but less so for preschoolers who don’t. A very helpful security guard followed us around closely, and was visibly relieved when my son was strapped in his stroller. The hushed admiration for the garments was definitely interrupted by my musical child’s newfound love of loud humming.

A touch more child friendly is the permanent exhibit, “With A Single Step: Stories in the Making of America.” We were interested in the paper dragons and the antique chinese candies on display. My son’s favorite part was a replica of a tea house/ general store that had little tea sets. He wanted to stay in there and have a tea party and had trouble understanding that the objects were part of the exhibit. I think for the most part, children will have better luck at the weekend family programming. The Mid-Autumn Moon Festival is coming up on Saturday, September 21st and will include storytelling, arts & crafts and family friendly gallery tours. And maybe then, parents will have a better chance to explore this interesting museum.

A trip to Chinatown is not complete without some exotic food. For a quick snack of mochi and a bubble tea, Fay da Bakery is delicious and right next to the museum. But we wanted to explore a little more, so we opted for a ten-minute walk to Joe’s Shanghai–a restaurant known for their soup dumplings (and other super preschool friendly food). It’s not a relaxing experience with rushed service, extremely cramped and communal tables, and no high chairs in sight, but it makes up for it with delicious food of enormous portions. After lunch, we wandered around a toy store where my son bought an orange waving cat, then a candy store for some gummy fried eggs, and then we visited the magical Chinatown Ice Cream Factory where the unusual flavors like Lychee or Zen Butter can all be tried before deciding on just a scoop of vanilla.