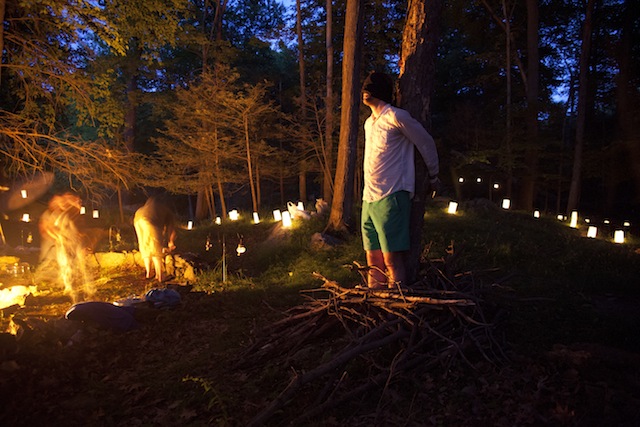 A scene from Odyssey Works’ 2012 performance, “The Map is Not the Territory,” which began as the participant awoke in Brooklyn and ended with him being bound at the stake in upstate New York. For this year’s BEAT Festival, Odyssey Works is attempting another wild performance for just one audience member. Credit: Odyssey Works

Fans of large-scale performances staged in unconventional venues rejoice–The Brooklyn Emerging Artists in Theater Festival is returning for a second year with a whole host of options for wandering, engaging and exploring with Brooklyn artists in settings like Grand Army Plaza, MetroTech and Congregation Beth Elohim, including a rare performance by local poet Lemon Andersen–the Tony-award winning playwright will perform from his new work ToasT at the festival’s closing party on Sept. 21.

Last year’s inaugural festival was promising, but sometimes frustrating due to chaotic ticketing, uneven performances and a complex schedule—no less than 38 performances at eight different venues. According to Stephen Shelley, the festival’s artistic director, this year’s BEAT, taking place Sept. 12-21, has retained its ambition but tightened its focus, with 20 performances in four neighborhoods–Downtown Brooklyn, Bedford-Stuyvesant, Park Slope and Prospect Heights.

“I think people are hungry for something that’s more experiential as opposed to simply sitting and observing,” Shelley said in an email to BB. “The future of theater is not in theaters.”

Many of the works are definitely chair-free. Fans of roving productions like  Sleep No More or Then She Fell may want to take one of the Institute for Psychogeographic Adventure’s Brooklyn Museum tours, an immersive, interactive adventure that turns the museum into a playground. If you’d rather lead than be led, become an extra in Odyssey Works’ boroughwide, immersive production on Sept. 21. The group is looking for help in all aspects of creating a life changing performance for just one audience member who is as of yet unnamed–even Shelley doesn’t know who it will be. Participation is free, but be sure to RSVP to get a spot.

If you prefer theater of the seated variety, one good bet might be Brooklyn 63 by Ping Chong+Company/651 ARTS, a performance being staged at three different venues—we suggest the Sept. 20 show at the Brooklyn Historical Society’s new theater. Brooklyn 63 features the true stories of Brooklyn-based Civil Rights activists, and reflects on 1963 as a pivotal year in American history.

La Defense, Cafe Dada, Bed-Vyne Wine and Ms. Dahlia’s Café, are all serving as neighborhood hubs throughout the festival. “The main function of the hubs,” Shelley explained, “is to partner with local businesses to create more of an outing for audience members.” Festival goers will get special discounts at all four spots when they present a ticket or program.

The BEAT is all over the place, and that’s the point, but if you can’t check out all 20 performances individually, you can get the condensed version opening night–it’s a mash-up from all the participating artists staged throughout the Brooklyn Museum. RSVPs are suggested, and the museum suggested donation still applies. Tickets to specific performances are priced at $20 or less, festival passes cost $60, and many events are free or low-cost. Consult the full festival schedule for dates and times.