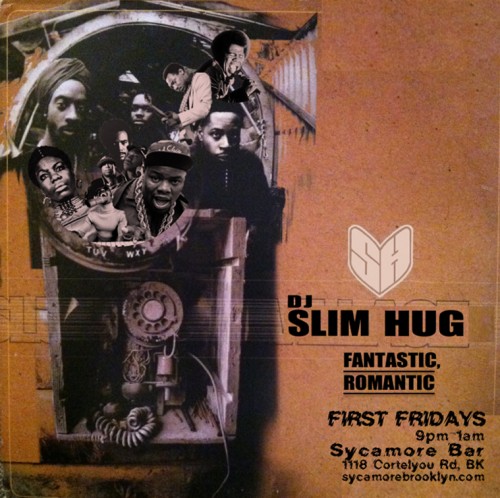 One stormy evening this summer, I decided to check out Sycamore’s first Fridays with DJ Slim Hug. The place was comfortably busy, hip young people filling the bar, standing in groups or sitting up front, while our DJ set up his turntables in the corner. I settled into a seat across from a sprawling wall of liquor with a beer and my friend Jason, who lives in Ditmas Park.

Sycamore is a neighborhood joint, equipped with a flower shop in the front front and stocked with international craft beers and American whiskeys. The garden in back is open year-round and its first Fridays are exactly what they sound like: a DJ’d evening the first Friday of every month. About three years ago DJ Slim Hug inquired about the bar’s possible investment in DJ equipment (the owners agreed, obviously) and the monthly set started up.

The music started around 9:30 with some smooth piano jazz, moving on to an unidentifiable disco and funk interlude and eventually landing on 90s hip hop with Will Smith’s “Summertime.” Leon Haywood’s soulful (and sexy!) “I Wanna Do Something Freaky to You,” En Vogue’s famed “My Lovin’ (You’re Never Gonna Get It)” and Chaka Demus and Pliers’ “Murder She Wrote” also made appearances amid a string of obscure soul/hip hop/disco/jazz (Jason described one tune as “diffused post new wave angry”).

To be totally honest, the set wasn’t amazing. Transitions were awkward and obvious with no particular musical flow and I think he tried to scratch a few times. There was also a solid minute of radio silence about an hour in.

But the set really isn’t the point at Sycamore.

First Fridays promise locals the opportunity to hang out in a fun, lively atmosphere and that’s exactly what goes down. Sycamore is already doing double duty as a bar and a flower shop–once a month it also provides the neighborhood with a venue. People weren’t focused on the music so much as they were focused on their friends and conversations. When a song they liked came on (Michael Jackson’s “Baby Be Mine”) they clapped and belted the lyrics, many bobbing their heads even while they did their bar things. A group of attendees danced by the DJ.

If you’re down for a fun night with the good people of Ditmas Park, check out Sycamore’s first Fridays, like the one tonight.