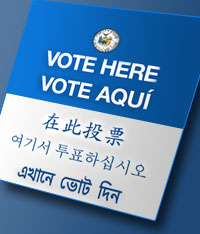 Tuesday, Sept. 10 is primary day in New York City. Basically, we’re either going to pretty much elect a mayor, or vastly narrow the race tomorrow. Here’s how it works: to receive the party nomination a candidate needs to not only beat all the other candidates, but get 40% or more of the total votes. Since the Democratic race is so crowded this year, it’s likely that there will be a runoff between the top two candidates (though it’s not guaranteed–De Blasio has been polling above 40% this weekend, but voters are still up in the air in a much more meaningful way than say, in the Obama versus Romney race).

If no one candidate gets 40% of the vote or more, there will be a runoff on Oct. 1. Then, the winner of that and the Republican candidate (there are no Republican candidates in the race that anyone considers likely to become mayor, this time around), will be on the ballot for the general election on Nov. 5.

Sound complicated? It is–that’s politics in New York. Get used to it, it’s no excuse not to vote. You know how voting for president feels very important, and also totally insignificant, because of the electoral college and red state-blue state voting blocs? That’s not the case here. Your vote is your vote is your vote, and it’s still anyone’s race (well, not Weiner’s). Need help making a decision?  Here are some resources.

City Limits has put together an incredibly comprehensive elections toolkit, with policy dossiers by candidate on topics including affordable housing, jobs, public safety and education; coverage of council races by borough and in-depth articles talking with voters from around the city.

Brian Lehrer has interviewed every mayoral candidate over the past few months, you can listen to any and all of those interviews online.

This poll site locator will show you where you’re supposed to go and vote. Polls are open from 6am to 9pm.