Welcome to the fall’s weekly concert previews. We’re gearing up for a lot of sonic action in the coming months–CMJ’s just around the corner, and Barclays is about to heat up with some highly anticipated shows (starting with a few shows listed below). In the meantime, plenty of treats await at some of the borough’s smaller venues, and this week, we’re looking at a schedule surprisingly bare of Williamsburg stages.

Here’s a voice you don’t hear everyday. Malian singer Leila Gobi, despite her distinctive voice, was encouraged by her family to marry and settle down rather than pursue music. She did both. Now one of Mali’s premier vocalists, who sings in various Malian languages, Gobi’s voice floats from high note to impossibly high note effortlessly. She also accompanies herself on a variety of instruments, including guitar and djembe.


In 2009, the Yeah Yeah Yeahs replaced the Beastie Boys as headliners at the Austin City Limits music festival at the last minute. I was there, and like some of my fellow concert goers, I was disappointed to miss an opportunity to see the Beastie Boys, a band I’d never seen live (still true). But Karen O., YYY’s ferocious frontswoman, held the Austin audience in the palm of her hand. She’s one of the great live performers to emerge from the early aughts, and I hear that on this tour she wears an illuminated headdress. And if this YYY’s performance is true to form, giant inflatable eye balls will descend on the crowd for the audience to bat around like beach balls. 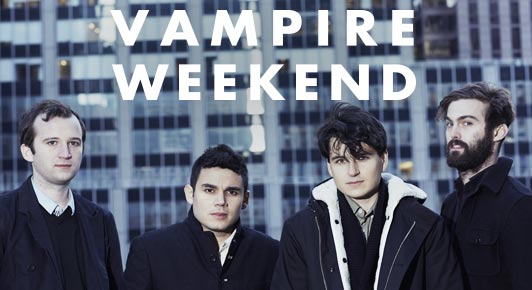 New York’s own Vampire Weekend takes to the Barclays stage this Friday, for perhaps the week’s most anticipated show.


I first saw Vampire Weekend in 2008 at Terminal 5. Let’s just say they’ve outgrown that venue. The band’s third album, Modern Vampires of the City, is their most lyrically and sonically complex to date, with allusions to death and despair delivered with the spoonful of sugar that is Vampire Weekend’s enduring pop optimism.

The Obits (who we wrote about last week when their new album came out) are a Brooklyn band that been performing and recording together since their 2008 debut at Cake Shop. Signed to Sub Pop records in 2009, the four-piece released their third LP, Beds and Bugs (we get you, fellow New Yorkers) earlier this month, a feverish rock record with more than its share of punk inflections and enough energy to keep heads bobbing and feet tapping.

A benefit for the Old First Reformed Church of Park Slope–which needs a new roof–this all-ages afternoon has more strings attached than your wireless plan.