Dr. George Tiller, a doctor in Wichita, Kan., was a faithful churchgoer and served as an usher during Sunday services. He was also one of the few doctors in the country who openly provided late-term abortions for women in their third trimesters. In 2009, he was shot and killed at church by an anti-abortion protester.

“I’d rather have a short career of meaning than a long one of mediocrity,” Dr. Tiller says in archival footage at the opening of the documentary After Tiller, an understated film about four late-term abortion providers who are still working, which opens at Film Forum and Film Society Lincoln Center tomorrow, Sept. 20. This statement looms heavily throughout the film as we meet the doctors who have endured death threats and fire bombs in order to provide a service they consider essential and which is not easily attainable.

The quietly gripping film, directed by Brooklyn filmmakers Martha Shane and Lana Wilson, focuses on the doctors and their patients, and avoids simplistic political rhetoric.

“When you go and you lift back the curtain and peer into the lives of these doctors and these patients, the reality is so much more complicated than the talking points on both sides of the political issue,” Wilson said. “It’s so much more nuanced and gray.” 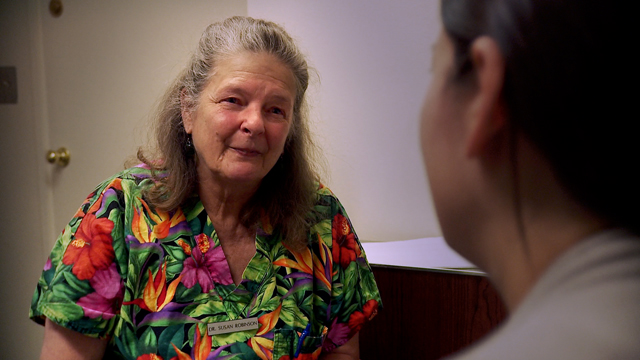 Dr. Susan Robinson councils a patient at her office in New Mexico. Photo: After Tiller

The film assumes viewers’ misconceptions, and confronts them subtly. Through doctor-patient conversations we discover some of the reasons why women seek late abortions. Some pregnancies were planned. We see women with their husbands and partners, who already painted their baby’s room, purchased a crib, and found out late in the pregnancy that the child had a severe fetal abnormality. In some instances, the child would not live comfortably, ever, or for very long. Some children would live in vegetative states, never recognizing their parents. We see parents who pray for answers. We see victims of rape, who were too scared to accept the pregnancy until the third trimester. We see pro-life patients, one as young as 16, who was in such denial about her pregnancy that she couldn’t confront it right away.

“They are suffering a loss worse than I think any other loss,” said Dr. Susan Robinson, who worked with Dr. Tiller and along with Dr. Shelley Sella performs late-term abortions at Southwestern Women’s Options in Albuquerque, N.M. “The loss of a child is so against nature and so agonizing, and here these people are suffering this loss and feeling in some level that they’re doing it by their own volition. But they’re doing it because they love their baby and because they don’t want their baby to suffer.”

Sometimes the doctors struggle with their decisions as much as their patients, and their answers aren’t always yes. A French woman calls Dr. Robinson, hoping to receive an abortion. She’s ready to fly from France. She has no fetal anomalies, no extenuating circumstances. But she desperately wants the procedure.

“It’s always emotionally difficult to say no to the patient, because I think to myself, who am I to say, ‘I’m sorry, you have to have a baby,’?” Dr. Robinson said by phone. “The difference being a week or two weeks or three weeks of gestational age. That lady was really far along and it was an elected abortion, there was nothing wrong with the fetus, and I just felt, I can’t do this.”

The film does not ignore the other side–we see protesters pray outside Dr. LeRoy Carhart’s clinic in Bellevue, Neb., and picketers in front of Dr. Robinson’s facility. But the film refreshingly avoids politicized arguments, and favors the intimate moments between patients and their doctors, who they see as their final hope.

“We don’t need to change people’s minds,” Wilson said. “If you watch the movie and you’re having a kind of internal debate as you’re watching, and if you leave the theater and you have a lot to think about and chew over for a long time, then that’s a success.”