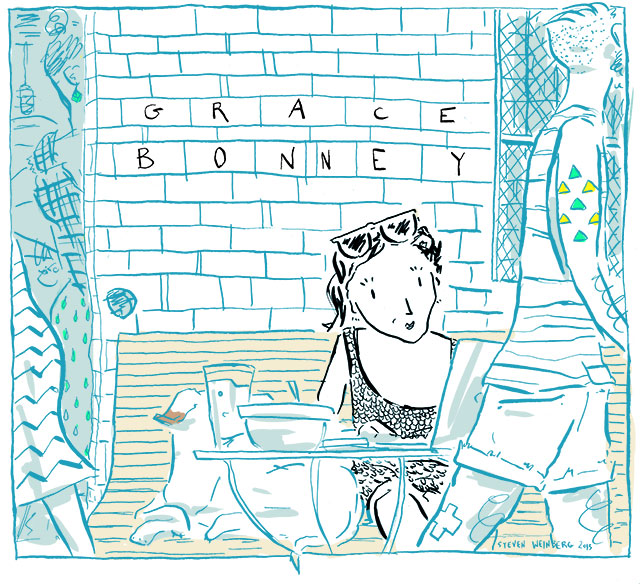 In our series, Five Questions, One Drawing, artist Steven Weinberg interviews and draws a well known Brooklynite each month. Today, it’s Grace Bonney, founder of Design*Sponge. She was such a great interview that we went over the five question rule and asked a few more.

When you leave Brooklyn and come back what’s the first thing you do?

Five Leaves. I mean I live down the street from here. This is usually my homebase for everything and I feel like I know I can get a good solid meal here, I can work here, I know all the people who work here. They’re fantastic and it just kind of re-grounds me.

Can I add I’d like people to stop painting things with chalkboard paint?

And it’s a really good place to sit and stop and people watch. I feel like the first thing I want to do when I get back to New York is to sit and adjust to the pace and people again and this is like sitting in a fishbowl and watching and adjusting again to the pace of things. Because typically when I leave the city I’m going to the south to see my family and it’s just so much slower and different. So this is kind of my ground zero for everything.

You commute by train/bike/car/walk/other? Why?

I go by foot exclusively. Not only because it’s the only form of exercise I get, but I adopted a dog this spring and that was kinda a part of accepting that walking was always going to be a part of the way I commuted because she’s just big enough that I can’t put her in a bag to take her on the subway. It’s also only one stop [from house to work] so I feel like the train’s just kinda lazy.

I think my current apartment is my favorite primarily because it’s finally a good size, I feel like it’s a good location that’s a good compromise of close to work and lots of things I need for day to day life and close to the park.

I had my first apartment in Greenpoint. Then two places in Williamsburg (really briefly), one place in Park Slope, and then back to Greenpoint and then this is the seventh. Seven apartments in 10 years.

Yeah and I don’t mind moving. I don’t like looking for an apartment but the moving process, I’m a pretty serious minimalist, so for the most part it doesn’t take me that long to move.

But you must have a lot of people handing you things for Design*Sponge.

But that’s what an office is for! So my office is an exercise in like…not minimalism. It’s crazy in there. A lot of stuff, a lot of color, a lot of pattern going on in there and my home is like the exact opposite of that.

I’m pretty simple. I feel like my entire life revolves around Five Leaves. This little hub of stuff by it feels great. My first date with my girlfriend was here. So dinner at Five Leaves, ice cream at Van Leeuwen around the corner. And then a walk in the park I feel is great.

My ideal ideal would be to go to the other end of the neighborhood where it’s a lot quieter because this neighborhood is so close to Williamsburg that it’s just really loud. Maybe dinner at Anella, drinks at Alameda, and then a walk down to that other end where there’s that tiny little not-a-park, but you can see the water by the very end of the neighborhood. I love that end of Greenpoint. I think it’s so pretty and I think it’d be nice if you could end it with a ferry ride. But that’s a little pie in the sky. A ferry ride is nice. And I think it’s underused and surprisingly romantic thing that’s available for like, $4.

Between touring around for the Design*Sponge book Design*Sponge at Home, visiting family, and everything else, you travel around the country a fair amount. What elements of Brooklyn design do you see?

Well it’s interesting because Brooklyn design has meant a lot of things over the last 10 years. It was the first thing I started covering where Brooklyn design really meant elevating things that were like disposable and almost like low end and there was almost this obsession with casting temporary vessels as permanent materials. Like all the takeout containers that were like cast in porcelain and lined in gold and that sort of tongue in cheek irony of high and low. But I feel like now Brooklyn is starting to be a bit more associated with this rustic salvage thing that’s happening and its like everything has the word “salvage” in front of it whether or not it means anything anymore. I don’t know. There are these two brothers, the Haselgrave Brothers, who do this. They designed Anella and Paulie Gee’s and they did Alameda which is I think gorgeous. That aesthetic of industrial almost French bistro meets salvage is what I associate with Brooklyn, and what I find people most associate with Brooklyn.

Are there things you see you want to bring back to Brooklyn?

Yeah, but I hardly ever think we should incorporate it. Because I want there to be some regional uniqueness because with the internet—I mean I love the internet. I work there—it’s killed it.

When you go to new places in Brooklyn what are the design elements that make you excited and—I want to interject that Design*Sponge is really positive site amongst the general snark of the internet and my wife (who is a huge fan) said I shouldn’t even ask this but I’m curious, so what the hell—makes you cringe?

Oh yeah, I’m happy to talk about cringe things. I mean I don’t talk about them on the site, because I don’t want to waste like real estate with that, but I think at the same time there’s nothing wrong with being honest about stuff that’s overused.

I think if I see another like milk or apple crate used as something I’m gonna go crazy. And I had that same problem in my house. But I think if I’m hiring someone to design a restaurant and you’re going to go with something slightly different I just think that kind of old crate thing has been done.

There’s a really great restaurant in Prospect Heights called Sunshine Co. that to me it feels very Miami for some reason. It’s like Miami meets Brooklyn. It’s very bright, like turquoise and black and white. The floors have this intricate black and white tile pattern and its gorgeous and that felt so interesting to me. I get excited when I see people use pattern in an unexpected way. I think it’s really obvious to just put up wallpaper and call it a day and I think it is much more interesting if somebody can hand-paint something or if they can take that pattern down to the floor and not just an obvious spot on the walls. So I get excited to see stuff like that.

But I just don’t want to go into a restaurant and feel like someone just purchased an old look. And you just see that.

In Brooklyn it’s so hard to be different. I think it’s just safer to make something that looks like everything else. But I’d love to see somebody make like a really strong aesthetic statement that’s like “we’re different, we’re not from here, and we like things that are different.” And so, I love Pok Pok for that reason.

Wow thank you, this is really more than enough. (The idea of this thing originally was to just have five questions.)

Oh wait. Can I add I’d like people to stop painting things with chalkboard paint?

Haha. Yes you can.