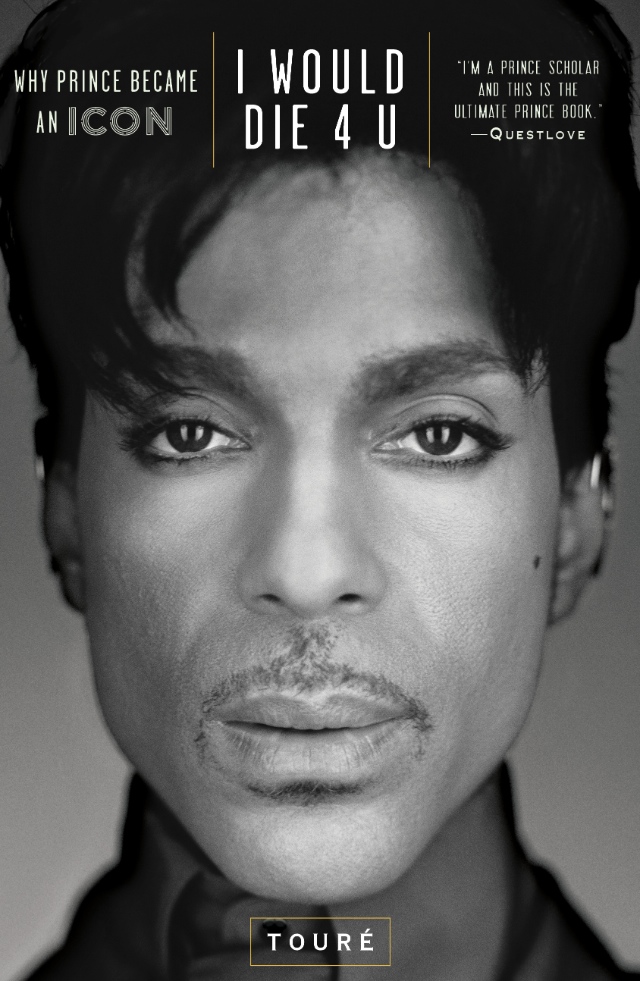 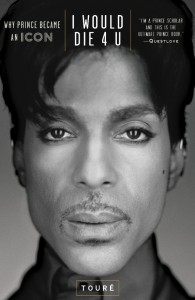 The Purple One will making his presence felt at the Brooklyn Book Festival this Sunday.

Okay–just to clarify–Prince will not actually be at the book fest. But the artist will be the subject of a panel discussion titled Purple Reign: The Legacy and Significance of Prince. It coincides with the recent release of a fascinating book, I Would Die 4 U: Why Prince Became an Icon, written by journalist and MSNBC’s The Cycle co-host Touré. Also joining Toure at the panel, which is moderated by Parul Sehgal, will be MSNBC’s Alex Wagner and music writer Alan Light, (who recently wrote the wonderful book, The Holy or the Broken, about the Leonard Cohen song “Hallelujah”).

We all know that Prince, who turned 55 this year (!), is an icon. This Rock and Roll Hall of Famer’s career accomplishments speak for themselves. But Prince is more than just a musical superstar famous for his prodigious, mind-boggling musical output and his eccentricities. According to Touré’s book, he’s also a key figure in the lives of Generation X-ers–a generation growing up in the ’80s and ’90s, made self-reliant by the high divorce rate at the time.

“I felt like I wanted to do something serious and thoughtful about Prince,” Touré, a Brooklyn resident, told me earlier this year when I interviewed him for a story that appeared on CBSNews.com, “because I think he’s one of the most important artists of our time and I wanted to explore why it is he became an icon for Generation X, even though he’s a baby boomer, because he had to fit with the generation in a way that they would make them respond to him.”

In I Would Die 4 You, Touré also delves into the two aspects of Prince’s life that became frequent themes in his songs: sex and spirituality. The sexual nature of his songs is pretty self-evident, but the religious themes passed me by until this book enlightened me. “I think those things went over a lot of people’s heads,” Touré said in our conversation, “and they were so attracted to and blinded by sex that they didn’t perhaps notice all the spirituality and all the religion that was coming in as well. He comes from a very traditional, religious background. I find it very interesting that among major rock stars, he’s presenting a very traditional religious message. Rock and roll is typically ‘sympathy for the devil,’ ‘live fast, die young.’ He’s this very traditional ‘follow God,’ ‘Jesus is the way,’ ‘reject the Devil,’ ‘be a good person.’”

Music aside Prince is a complex person–his family background has something to do with it, according to the book. “The guy’s nuclear family completely breaks down,” said Touré. “He has really no need or desire to create those basic social things that you sort of have to create and he constructs consciously toward becoming a rock star so he won’t have to then ever say he’s sorry or do those social niceties things.”

Touré himself had an interaction with the artist–he recalled playing a game of basketball with Prince several years ago at the latter’s Paisley Park recording studio in Minneapolis for a story that Touré was working on at the time. “He was good at playing basketball,” Toure told me. “To be a good jump shooter, you got to got to do it all the time, and he’s not in the constant practice of shooting jumpers. He missed a lot of jumpers but his form looked good, the movement looked natural and quick and smooth, he totally looked like an athlete who belonged the basketball court. It was really interesting to experience him as a person away from the persona.”

Clearly, Prince’s popularity and influence have not abated, which can’t be said for a lot of his contemporaries from the ’80s. He is still in the news– whether he’s tweeting, making an appearance at City Winery or putting out a new single, with Dave Chappelle, who played Prince, playing basketball in one of the best skits ever from The Chappelle show, on the cover. Shirts versus blouses.