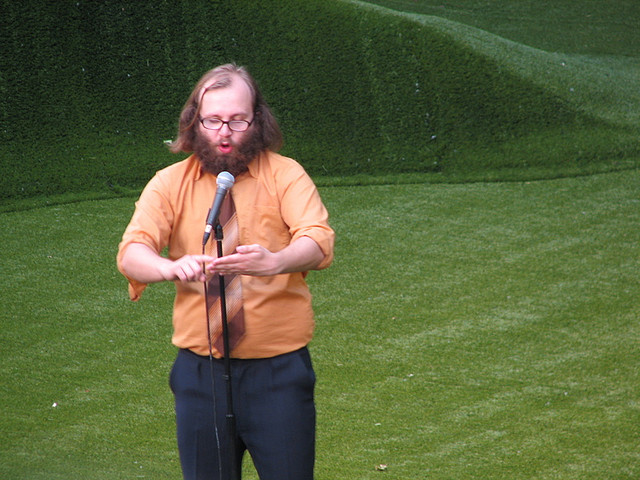 British comedian Daniel Kitson had asked to be paid for his participation in a prior year’s Eugene Mirman Comedy Festival exclusively in “unique sandwiches.” Photo: ruudb0y via Flickr

A few years back, while writing a preview of the annual Eugene Mirman Comedy Festival for this blog, I learned that British comedian Daniel Kitson had asked to be paid for his participation in a prior year’s festival exclusively in “unique sandwiches.” Although he’d been on my radar for a while, that’s when I decided I had to see Kitson live, so I booked tickets to his next show at St. Ann’s Warehouse, Always Right Now, Until it’s Later. What I saw, one Sunday afternoon a few weeks later, was a one-man performance so original and funny and exploding with creative energy that I knew I was witnessing a truly remarkable talent. The New York Times and New York Magazine agree, having respectively called Kitson a “monologuist extraordinaire” and a “hyperarticulate comedy folk hero.” Luckily, he seems to have made St. Ann’s Warehouse a regular stop on his touring schedule, and he’s back this fall with a new show called Analog.Ue, which starts a month-long run on November 22. Tickets are just $25 and might sell out quickly, so be smart and buy yours now. (Incidentally, the Eugene Mirman Comedy Festival is back again too, at The Bell House and Union Hall this weekend. Most of the shows have sold out, but you can still snap up tickets to a few great events here and here, and tickets to the EMCF Edition of Creaghead & Company are walk-up only, making it first come, first served on Sunday, Sept. 29). –K.H.