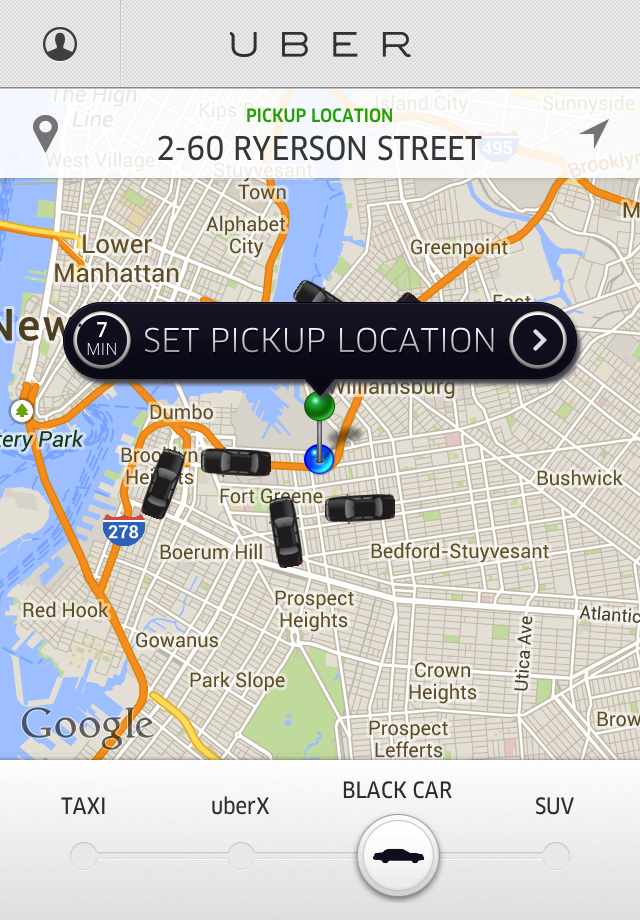 If you appreciate technological advancements that make Brooklyn life a little easier as much as we do, well, there’s an app for that–several in fact. Here are a handful of new user-friendly apps that make transportation to, from and around our fair borough a snap–and no, Candy Crush Saga did not make the cut.

Being asked “Where are you going?” by a cab driver when you’re trying to get back over the bridge is the bane of every outer-borough resident in New York City–not to mention illegal, annoying and cosmically uncouth. Enter Uber to the rescue. Next time you need a lift, request a ride via the app, text or online. A private driver will come pick you up and you can compare fare quotes on the app before ordering a car–the ride will be charged to a card on file so you don’t have to worry about whether or not you have cash on hand. You can check the ETA of your driver in the app as well and pinpoint your location on its map if you don’t know your exact address.

There’s nothing worse than falling asleep on the subway and winding up in Coney Island. MetroNap, which is for Android users only at this point, was designed especially for the New York City subway system to allow riders to get in a few winks while riding the train. Just pick your subway line, station location and desired final stop, then let the rocking motion of the train lull you to sleep with the comfort of knowing your phone will vibrate when you’ve arrived. No, this app isn’t psychic–it can detect whether the train is moving, as well as when you’ve reached a subway stop, which means it can come in handy even if you’re not unconscious, but say just on a crowded train or engrossed in a good book.

These apps make getting from Point A to Point B as simple as possible by telling you when the next train, plane or bus is departing near you in real-time. What’s nice about both apps are that they’re not limited to just subway and bus routes, they include integrated info on subways, buses, NJ Transit, Long Island Rail Road, Metro-North Railroad, PATH, NICE, Staten Island Ferry and Bee-Line itineraries–ideal for the multi- borough, county or even state commuter. They’re also both available in cities around the country–and the world–which is extremely useful for navigating unfamiliar public transit systems. Roadify also includes crowdsourced real-time reporting on travel conditions and on available parking spots, though, in New York at least, these comments tend to be more about commuters venting their frustration than actual information about delays.

Just to ensure we have our transportation options entirely covered, we’ve included the Citibike app on this list. The city’s first bike share program is off to a successful start, and even with over 10,000 bikes being docked at hundreds of locations, sometimes discovering the closest dock to where you are can still be a big pain in the ass. This app’s map pinpoints docking stations and will let you know if bikes are available at a given location. You can also plan bike routes–something Google Maps perplexingly still isn’t offering. The app will also let you know what other amenities are in your area–be it coffee, shopping, food or fun.

If you are one of the lucky (unlucky?) ones among us who happens to own an automobile, finding a parking spot can be problematic–what with all the rules of alternate side parking and street sweeping schedules to keep track of. In these instances, Spot Hero is one app that will surely come to your rescue. It’s designed to help you find a guaranteed parking spot by comparing all the available places to park in a given area–this is for parking garages and surface lots, so if you plan on parking on the street, you’ll still have to jockey for position just like the rest of us. You enter the time and duration you’ll need a space into the app, select a spot, and bring the emailed confirmation with you when you arrive. Commuters can also organize regular monthly parking through the app as well.

This new app has been referred to as Spotify for books, and that about sums it up. For $9.99 a month you get access to a huge library (hundreds of thousands of titles, everything from self-help to literary fiction to histories to romance) on your iPhone, and, starting later this fall, the iPad. If you’re an avid reader it’s a steal that will also unclutter your apartment and get you out of the Amazon trap. There are a few user interface hiccups–the sign-up process is overly complicated and you need to make sure the book is downloaded before you go underground–it requires an additional click after selection. But the upside is that with Oyster you’ll never be left without something to read when you wake up at Coney Island and have a long train ride back to look forward to.