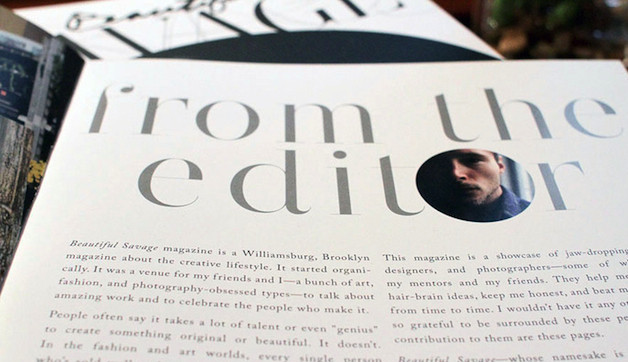 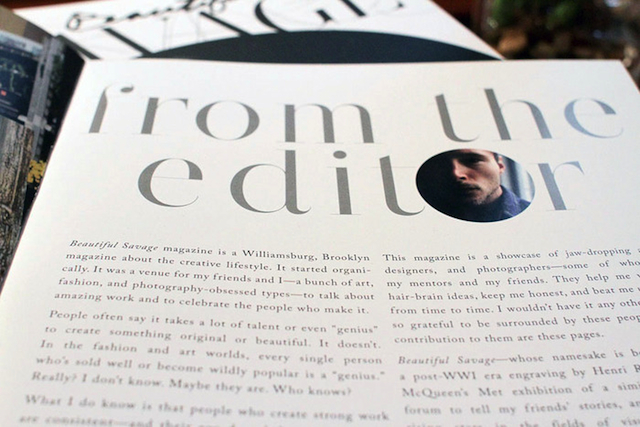 Idle hands might be the devil’s workshop, but when Williamsburg resident Chad Saville found himself laid up with a spinal injury last winter, the extra time on his hands wound up being just what he needed to get his culture magazine, Beautiful Savage, off the ground.

“A guy like me,” Saville says, “you give me too much time and I start telling the coffee baristas that they should do something. I started this thing because I needed to tell stories.”

Beautiful Savage takes a filtered look at lifestyle through a Brooklyn lens aimed outward into the world of art, fashion and photography. It reflects the dark-edged aesthetic of Saville’s social circle, as well as that of a certain tribe of New Yorkers for whom black will always be the new black, minimalism is a frame of mind and Manhattan only exists below 14th Street.

Its issues are dedicated to mainly local designers, musicians, artists and models. “They’re all friends,” Saville explains. “The reason I did this was to create not just a publication but a community that centers around visual arts and the lifestyle of being creative. It’s not nepotism, but it’s like a community that feeds itself. Ultimately, all it boils down to is just listening to people and watching what they do and becoming excited.”

The first issue of Beautiful Savage, Ritual, was released in February and the second, Ceremony, came out earlier this month. Both are heavy on the art direction and unafraid to show a nipple. While the magazine is named after a Henri Reidel engraving from the 1920s of the same name–not an allusion to the Alexander McQueen exhibition at the Met three years ago–the late fashion designer would likely approve of the stylistically subversive photo spreads Saville has included in his first two issues. Interwoven between all that art-house photography are Q&A interviews with people like Richard Hell, which showed a rarely seen side of the punk rocker, whose memoir I Dreamed I was a Very Clean Tramp reintroduced him to our cultural consciousness this past summer. His cover subjects are working models, one of whom, Katie Gallagher, who Saville met in an abandoned warehouse in Brooklyn, walked by while he and I were conducting this interview outside Cafe Vita on Ludlow Street. Saville used to live on the LES and still frequents its streets for art openings and events with his girlfriend, Thistle.

“For me I find that most of the talent in New York travels through downtown and through Williamsburg,” Saville says. “It seems to be the brain trust.”

Despite operating on a self-publishing budget, Saville has managed to cajole the likes of Hell and London-based sculptor Kevin Francis Gray, whose dueling interests in Neoclassicism and teenage rebellion take shape as shrouded, marble and bronze statues of disaffected youth (arms crossed, shoulders hunched, sneakered-toes tapping), like modern-day Davids or Venus de Milos but with more angst (and arms). It’s possible you’ve seen Gray’s work without even knowing it–he’s also the man behind the molten mirror, mirror on the wall Charlize Theron gazes into in Snow White and the Huntsman. His work will be exhibited the the Frieze Art Fair in London starting Oct. 17.

“He’s probably one of my favorite artists working,” Saville says. “His work is modern, but it’s all based on classic technique. That’s the problem with modern art–it’s just like bullshit. Anybody can do whatever they want. They’re not fucking casting bronze, but he’s casting marble. Everything about it just makes me want to cry.” It was while interviewing Gray, Saville says, that he realized the magazine was becoming more than just the itch he scratched while he was healing.

“That guy, he’s legit,” Saville says. “I’m just like telling the story, and he says ‘What you’re doing is really great, and I’m honored to be in your magazine.’ I got off the phone and it was just one of those moments where I just felt so grateful to do what I do because it was an accident. I almost didn’t do it.”

Beautiful Savage’s website attracts about 12,000 unique viewers a month, and the print and iPad copies of the magazine reach an audience of approximately 3,000 more–numbers that put things into perspective for Saville.

“The truth is, when I think about the size and the influence of other publications, I’m nothing,” he says,” like realistically. I mean, I love my voice, but I’m not egotistical enough to think that I have any sort of power.”

If you were among the 700 people who showed up the the magazine’s launch party at a warehouse in Williamsburg last winter or the throng that feted its sophomore issue a few weeks ago at the Hotel Chantelle on Ludlow Street, where the Brooklyn DJ duo Creep worked the crowd, you might disagree. If you weren’t, you can still read a digital copy of the first issue online and pick up the second for $10 bucks and a handful of magazine stands in Brooklyn and Manhattan to see for yourself. Bouwerie Iconic Magazine in Soho, Bedford Exotics and Milly & Earl in Williamsburg and Union Square Magazines on 4th Avenue are all carry copies. Beautiful Savage‘s next issue, The Man issue, will be released in March 2014.