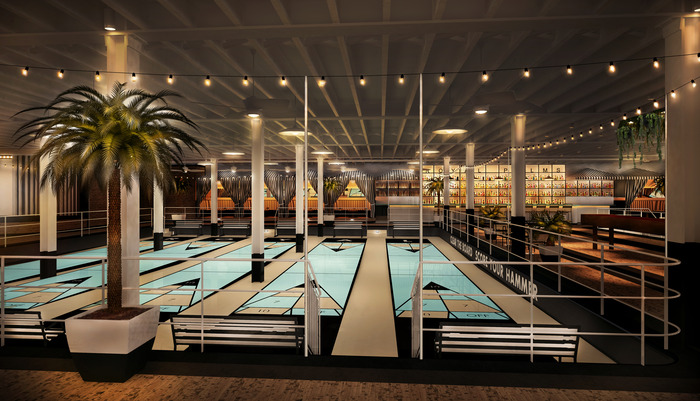 A rendering of The Royal Palms, once completed.

It’s no secret that we’re pretty excited for the Royal Palms, the first shuffleboard nightclub in Brooklyn, and really, in the world. It’s slated to open later this fall, and BB pals Jonathan Schnapp and Ashley Albert have been hard at work for more than a year already on this massive project. Now they need just one last push to bring their, and our, dream to reality. The Royal Palms has launched a Kickstarter campaign to fund the construction of the courts themselves. For $150 you get a night out for four–an hour on those gorgeous courts, four drinks and a shuffleboard clinic with Jonathan or Ashley. For $450 you get league membership for six–10 Monday nights spent shuffling (plus two playoff nights) a league pin, drink specials and 10% off at the Palms for the entire season. That’s a lot of feeling like you’re in Florida for a few hours during the dark depths of winter for about $75 per person.