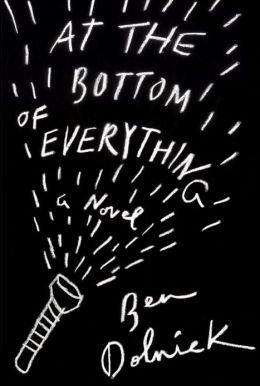 When people talk about novelist Ben Dolnick, they inevitably describe him as a sensitive, generous or warmhearted writer, with a gift for capturing emotional nuance. It strikes me that part of that praise springs from the (unfortunate) fact that we don’t generally expect young men, particularly smart young men, to be any of those things.

Whether I’m right about that or not, his new novel, At the Bottom of Everything (not to be confused with the Bright Eyes song of the same name), indeed feels like being inside a real person’s head.

Our protagonist, Adam Sanecki, whose first person narrative is interspersed with some excellent use of email as a narrative device, is a twenty-something Washingtonian who has had just comfortable enough of a life to let himself slip into a post-heartbreak fugue that turns him into a bonafide loser. If you are older than 30, or rather, if your first real heartbreak wasn’t mediated by Facebook, the first third of this book will keep you reading out a sheer anthropological interest about how the kids are doing it these days. In this status-update obsessed state of bummerdom, Adam sinks low enough to reconnect with Thomas Pell, a childhood best friend he has been avoiding for years, for a variety of reasons that slowly unravel.

In Adam’s remembrance of his friendship with Thomas, Dolnick nails the secret language of late childhood, that middle school era where kids turn inward, creating hidden worlds with a best friend to eke out space separate from their parents, before the open revolt of high school catches hold. Adam and the Owen Meany-like Thomas are an odd pair, which is why no one thinks much of it when after an exceptionally close middle-school friendship they  drift apart. That rift though, has nothing to do with the soccer team or girls, there’s a secret they share, a dark one, at the center of the novel.

The adult Adam travels to India to find Thomas, who has become something of an acetic mystic, and though you could glibly say that while he goes to India to find his lost friend, he ends finding himself, that’s too facile a read on this deeply felt and elegantly expressed tale. Adam’s time on the sub-continent takes on a level of impressionistic weirdness that brings Murakami–The Wind Up Bird Chronicles in particular–to mind. It’s surprisingly resonant, and yes, sensitive, generous and warmhearted.

Ben Dolnick will discuss the book with Joshua Foer at Literary BFFs at McNally Jackson Books on Sunday, Sept. 29 at 7pm.