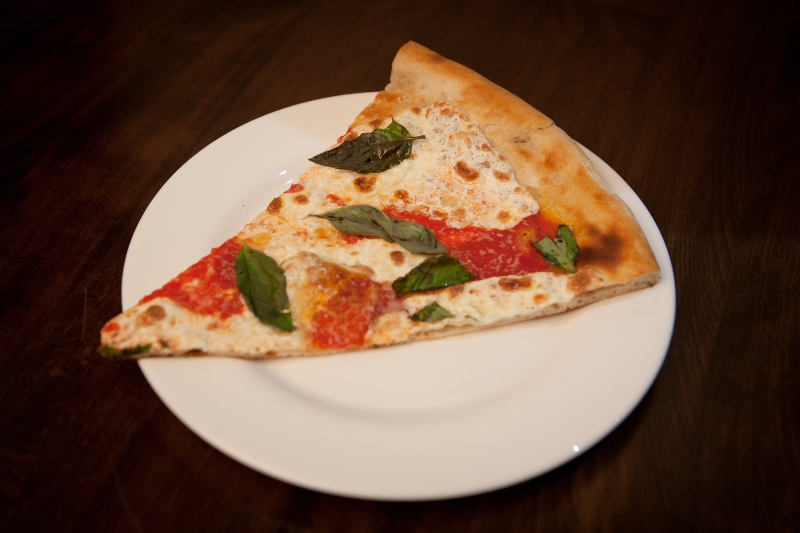 One of the most coveted items in the world of New York City pizza is the legendary coal-fired oven. They burn twice as hot as regular gas ovens, allowing pizzaiolis to craft that rare kind of crust that’s perfectly thin and crisp, but cooked through with a nice charred bottom. Many pizza chefs say coal ovens are preferable to brick ones, but they’re hard to come by in New York. Environmental regulations have essentially banned the installation of new coal-fired ovens here because of pollution concerns, although old-school spots like Totonno’s and Lombardi’s are allowed to keep running with the ones they have. The ovens are  so in demand that when Grimaldi’s abandoned its long-time space under the Brooklyn Bridge recently, its former owner swooped in to grab the coal-equipped spot immediately.

Yet there is one thing the NYC pizza world does not have: a coal-fired, by-the-slice place. All of those classic pizzerias, including Juliana’s, which is now open in the old Grimaldi’s old space, are sit-down establishments where you can only order full pies. In my humble opinion, the ubiquitous availability of pizza by the slice is the main thing that sets the NYC pizza scene above most other cities. But New Yorkers on the go can’t get a coal-fired slice anywhere; we only have the option of chowing down on a thicker corner pizzeria-style slice (#firstworldproblems).

Until now, that is. Table 87 opened in Brooklyn Heights quietly last year, attracting little attention despite what seems to be a groundbreaking business plan: coal-fired pizza, by the slice. Its secret is a modern coal-fired oven made by Washington State-based Wood Stone Corporation that uses a high-tech venting system and a harder variety of goal to cut down on emissions, which apparently makes it legal to install in NYC.

And it works. Table 87’s slices are light, crisp and delicious, very much in the style of what you would find at Totonno’s or Lombardi’s, but available to order one-by-one. Progress!