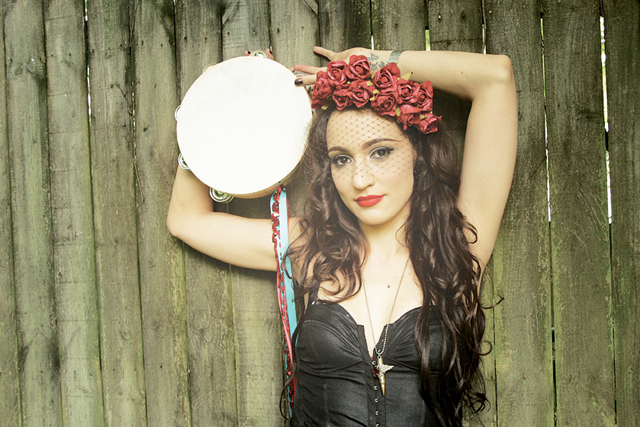 Nashville’s Linda Ortega stops over in NYC for CMJ during her national tour in support of her new record, “Tin Star.” Photo: Julie Moe.

The title track off country singer Lindi Ortega’s new record Tin Star finds her crooning about playing for “a few pennies” in her adopted hometown of Nashville, a city so rich with music that its easy for even talented musicians to barely busk by.

“Nashville is a difficult place to get a draw because there’s so much happening all the time,” Ortega says.

But after playing herself on an episode of last season’s ABC drama Nashville, the Toronto transplant turned Nashville fixture is selling herself a bit short.

Ortega, who favors cherry-colored lipstick and black birdcage veils on stage, didn’t realize she’d sold out a 500-person venue in Edmonton, Canada, until she sat down to dinner the night of the show.

“I was having some pho soup at a restaurant across the street from the venue and my back was to the window,” Ortega says. All of a sudden, her friend pointed outside. “I turned around and there was a line that went all the way around the venue for people waiting to get in. I’d never experienced that before.”

Ortega is an effervescent live presence, with just enough drawl and twang to satiate the country fan’s appetite, but she’s unmistakably blues-influenced, with some rasp and spontaneous vocal runs.

She recorded Tin Star live from the floor to retain the unrehearsed quality of her live shows. Ortega flows easily from a quivering lower register to her soaring full voice just fine on her record, but her voice reaches the rafters when she’s on stage.