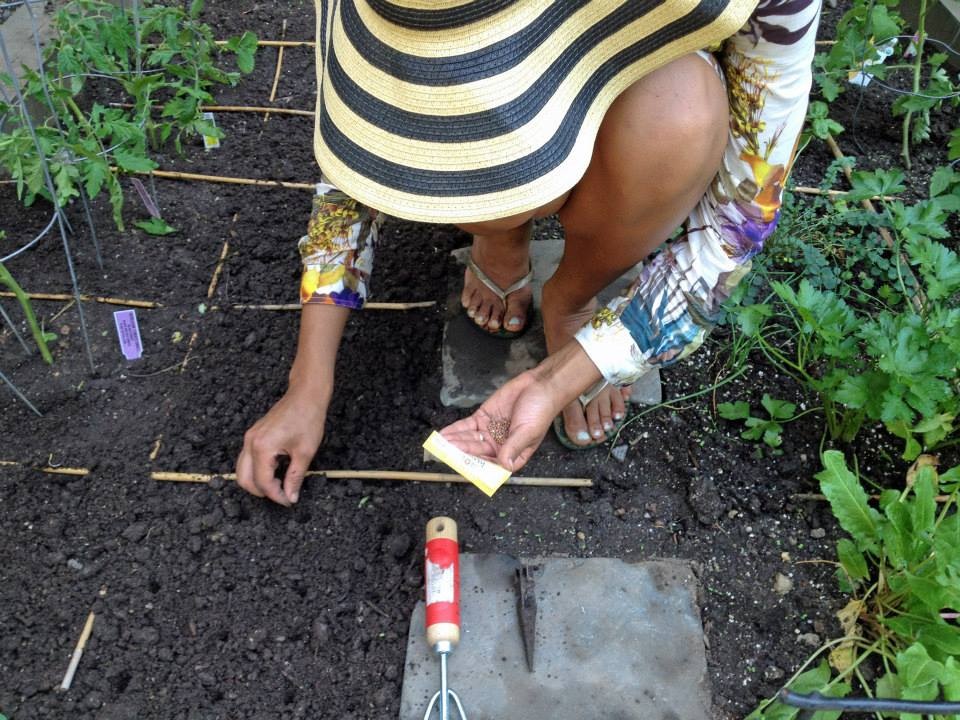 Wanting to spend more time outside, I decided to spend the summer community gardening, not entirely understanding what I’d gotten myself into. Photo: Jordan Galloway

As I stood teetering on a plastic lawn chair, trying to make a teepee out of 10-foot-long bamboo sticks so that the vines of my Asian long beans would not snake their way around my cherry tomato plants and suffocate them like a boa constrictor, I realized I wasn’t cut out to be a community gardener. I looked up from what I was doing just long enough to see the thunder clouds rolling in overhead and felt entirely out of my league.

I would have laughed if my legs weren’t cramping and I wasn’t coming so dangerously close to falling into my freshly planted kale stalks. This was in June, and I was still a couple months away from turning my back on community gardening entirely. I was still full of as much promise and potential as those tiny bean stalks I was tending to, which would later contract some strange disease that bleached their leaves and attracted an army’s worth of black ants to my garden bed.

It sounded simple in my mind, a leisurely summer picking weeds and watching my garden grow. I found a pair of old overalls at a flea market, bought a small shovel and dug in, but within a few weeks I realized that community gardening was not the kumbaya experience I expected it to be. It is my opinion, which was formed solely from my own experiences this season and should not be seen as a generalization of community gardening overall, that urban gardening attracts the most Type A individuals I have seen since working in a hot yoga studio on the Upper East Side. I have never seen people get so up in arms about a bunch of arugula in my life, and I quickly found myself much more fascinated by the comings and goings on in my community garden than by the vegetables themselves.

The common conception that community gardens are inclusive undertakings, built around bringing people together to nurture fruits and vegetables and their fellow neighbors, is not entirely true. Stripped of any formal infrastructure, things can get catty very quickly. In my experience, community gardeners fall into three camps: sharers, takers and stealers—takers and stealers may sound like a matter of semantics, but I will explain the nuances between the two here shortly.

Sharers, as their name implies, are the givers in the garden. They are willing to spend hours helping others weed their plots, pass around packs of seeds like string cheese on a playground and, for all intents and purposes, are the types of people your mind conjures when you think of community gardeners—they compost, they feed chickens, they welcome the masses that come in off the streets asking questions on occasion. Without these people, community gardens wouldn’t exist because they are the ones that actually tend to something other than their own beds; they organize barbecues, build sheds and share their excess harvest. 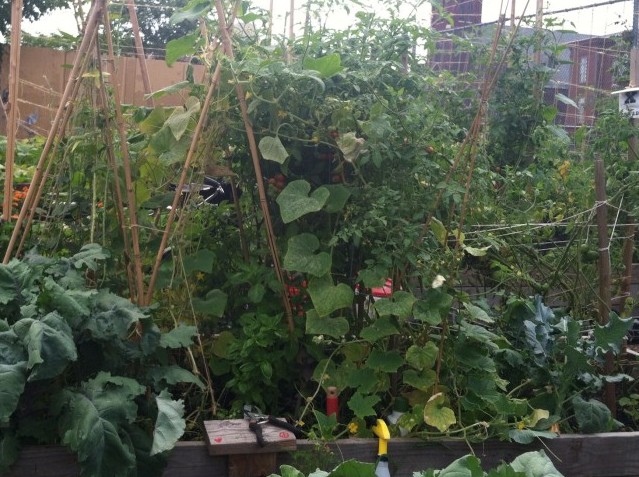 The last photo of my plot before the ants came marching in. Photo: Jordan Galloway

Takers piecemeal their plots together from the cast-offs of their fellow gardeners and are the most prevalent type of person you’ll find in a garden. They’re happy to take any extras off your hands, be it seeds, tools, twine, dirt, produce or eggs. If you can’t find your garden shears, you’ll most likely find them at the plot of your nearest taker—and you know who they are, because they always borrow, only occasionally ask first, and never bring anything back. This one-way-street behavior is tolerated because it is doing relatively little harm to the garden itself and its other occupants, even if it’s not exactly neighborly.

Stealers, on the other hand, are the dregs of community garden society. Stealing someone’s ripened produce off the vine is the cardinal sin of community gardening. News that a $1,300 bike had been stolen from the garden went almost entirely unnoticed over the summer when word was posted on the garden’s online forum, but when someone picked a pepper out of someone else’s plot without asking a few weeks later, the same forum exploded with outrage, admonishing the unknown culprit and offering condolences to the community gardener who’d suffered such a loss.

In August, tomatoes were at high yield making them a prime target for a thief who was stealing them and supposedly selling them to a bodega down the road. Gardeners were pissed about the stealing, but more enraged by the fact that he was potentially profiting off of their stolen produce. What to do about it was all anyone could talk about for weeks. At one point someone who had actually caught the man in the tomato thieving act was considering having a sketch made of the suspect like something out of a “Law & Order” episode. The tomato burglar was never captured and is currently the prime suspect in a string of pumpkin thefts.

I saw friendships go to seed over the course of a season in the garden. In an extreme case, one woman actually took back a cat she’d given to a fellow gardener who was looking for a new family pet after the two had a falling out about their adjacent plots—lending new meaning to the term cat fight.

Watering, surprisingly enough, is a real sticking point in my community garden. Everyone has their own systems in place within their plots, and an unsanctioned sprinkling with a water hose could throw the entire equilibrium off balance. The words “I was just trying to help,” don’t hold much weight when it comes to the mores of community gardens. Sometimes givers, in their efforts to do good for their fellow gardeners, can get overzealous. At one point, someone took it upon themselves to fertilize all the plots in the garden without asking permission first, a huge undertaking that sounded helpful but wound up causing a ruckus when it was revealed that the fertilizer he’d used contained animal by product—very bad news for the vegan gardeners.

Looking back I should have known that the vegetables themselves would be secondary to the experience. I was once gifted a hydrangea plant by an ex-boyfriend and its life cycle followed the same path as our relationship, showing up on my doorstep healthy, green and vibrant, and winding up shriveled and dead in my dumpster before its first blooms had fully formed. As a birthday present one year, a friend, who would turn out to be the one who got me into community gardening, gave me a money tree she assured me was easy to keep alive in an apartment—it died within two months and I took it as such a bad omen of my future earning potential that I didn’t touch another plant until this past spring. Later in the summer I nearly stripped the paint off of someone’s car while trying to water my plot from a fire hydrant. The driver, who was sitting inside the vehicle at the time, tried to assure me his car was fine, but I still saw it as a definitive sign that while I am not a stealer or a taker, I’m not community gardener material either.

Harvest season is halfway over and my garden, like most in the city, will close in a couple weeks once the first frosts set in. I’ve decided to make it one and done and reap my gossip from my local coffee shop, and my vegetables from the much more dependable farmer’s market, instead.