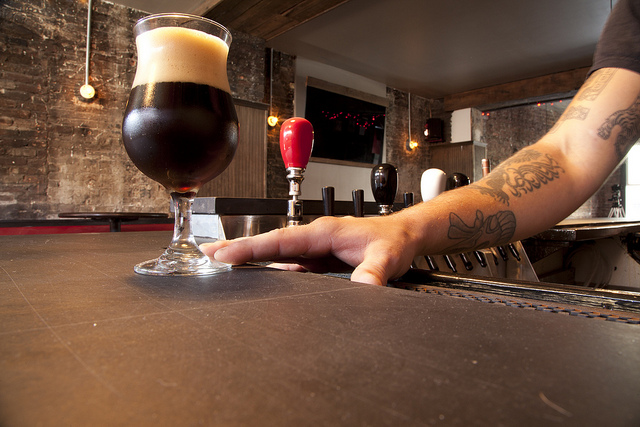 With 12 taps and a rotating list of domestic and international bottles being featured, Glorietta Baldy is giving beer nerds in Bed-Stury a reason to celebrate. Photo: Glorietta Baldy

Ben, Seth and Mike Wiley–the trio of brothers behind Park Slope’s Mission Dolores and Owl Farm, as well as Carroll Gardens’ Bar Great Harry–have moved significantly east for their latest venture, opening Glorietta Baldy on Franklin Avenue this evening. The location is at the nexus of Bed-Stuy and Crown Heights, a crowded crossroads near the Franklin Avenue A train stop that is best known for its ample offerings of top-notch Caribbean food, but sorely in need of some craft beers to wash said grub down with (#brooklynbeersnobproblems).

Those familiar with the Wiley brothers’ existing bars won’t be surprised that the focus here is on quality beer. Twelve tap lines and a rotating bottle list feature offerings from local beer-mongers like Sloop Brewing Company of the Hudson Valley, as well as top-notch international stuff from the likes of Evil Twin out of Denmark. Their bottle of the month program will offer up one extremely rare, large-format beer each month. The guys promise to scour their network of distributors and deliver something exotic each time, so you can always count on discovering a brew at Glorietta that you haven’t seen anywhere else. The first bottle of the month will be Bohio, an imperial stout from Sagra brewery in Toledo, Spain–a burly 10.5% ABV brew with a smoky aroma and flavor. Serious beer nerd points if you have tasted (or heard of) it before.

The bar’s quirky name is taken from a bald-top mountain near Glorieta, New Mexico, where as Seth Wiley explains, he lived for a while during his “mountain bike bum” days. The extra “t” in Glorietta references an Americanization of a Spanish word roughly translating as “crossroads.” The concept here is a homey, neighborhood-watering-hole type of place. The dark space features typical Brooklyn design elements–bare woods, exposed bricks–while doing a nice job of being comfortable and not too precious. The bar itself is nestled under the stairs leading to the second floor of the building. Adding to the low-key allure are a pair of Metallica and AC/DC pinball games in the back, and they also hope to open a small outdoor space in the near future. For those not content with roti and jerk patties, Glorietta Baldy plans to partner with local restaurants to offer a menu of small bites in about two weeks. The menu will kick off with an perfect-for-fall lineup of chili, including lamb, beef, chicken and veggie varieties.