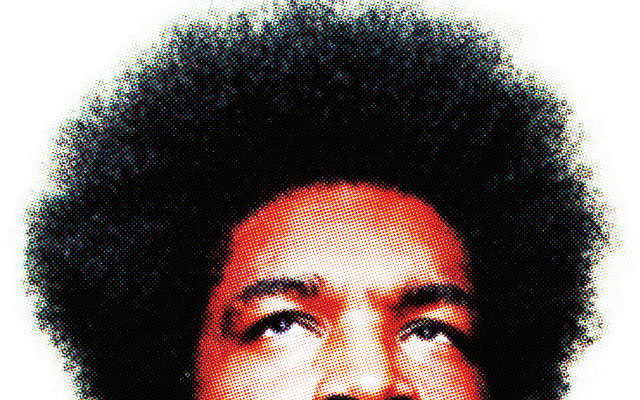 Tickets to Electronium: The Future Was Then are $25 for Brooklyn Based readers today only. See below for details.

Entertain this odd-couple scenario: Stevie Wonder and Karlheinz Stockhausen (the famous avant-garde composer) get stuck sitting together on a long transatlantic flight. What do they talk about? Stevie’s 1970s jaunts into space-age funk with TONTO, the world’s first analog synthesizer of its kind? Karlheinz’s fascinating experiments using sine waves to mimic human voices? According to Questlove’s upcoming BAM show Electronium: The Future Was Then—a dizzying sonic trip celebrating the pioneers of electronic music—they’d talk about both. And at length.

Now to be clear, Stockhausen is dead. And the only conversations Electronium will feature will be of the musical sort. But the show’s revelatory point—at least as evidenced by its mind-bogglingly diverse set and guest list—is that the majority of popular music we listen to today is deeply indebted to the wild-eyed innovators of the electronic music revolution. Stevie needed Stockhausen, in other words, and leave it to a voracious musical polymath like Questlove to slice the music history pie in such an interesting way.

Just forget, for a moment, the amiable beat maker you cozy up to every night on Late Night with Jimmy Fallon. This Questlove is going to get awesomely weird. The show—which features the fascinating lineup of former Roots beatboxer Rahzel, R&B singer-producer How To Dress Well, avant-R&B outfit Sonnymoon, DJ-composer Jeremy Ellis, and folktronica violinist Emily Wells, among others—will be a delirious mash-up of live playing and sampling that celebrates seminal recordings from throughout the history of electronic music. That means the requisite metronomic grooves from the drummer-in-chief, but also a torrent of blips, bleeps, loops, tape splices, sine waves, synth solos, and disembodied sounds the likes of which no Roots record has ever seen. Think Varèse, Messiaen, Raymond Scott, and Cage, but also Kraftwerk, Funkadelic, tUnE-yArDs, and Pavement all rolled into a live playlist sent from some bits-and-bytes-obsessed avant-garde heaven.

The takeaway is that the innovators of electronic music—especially the ones from the 1950s who worked with synthesizers the size of entire rooms—are responsible for 99% of the production feats in our music today. And it means something that Questlove himself is picking the records. If he has taught us anything over the past few years, it’s that his listening is something we should listen to. More often than not, Questo’s quests end in good finds, and this sure-bet of an event will surely be one of them.

Tickets to Electronium: The Future Was Then are $25 for Brooklyn Based readers today only with the promo code 24091. Valid for online, phone, and box office sales only. May not be combined with other offers, not valid for prior purchases. Subject to handling and facility fees and availability. Maximum of four discounted tickets per household. Offer expires on Oct. 23 at 11:59pm.