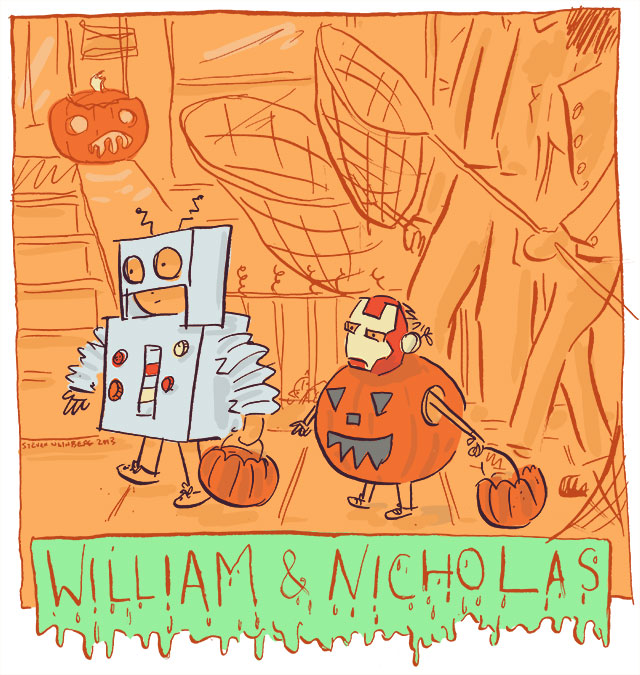 Wait. Do they give us candy, or do we give them candy?

How long have you lived in Brooklyn?
Hmmm… I don’t know. [Mom asks him, “Well have you ever lived anywhere else? And how old are you?” William looks at her for a few seconds.] Five. Five years.

Do you know what you’re going to be for this Halloween?
Um. I made a robot costume. It’s made out of a paper bag. And… cardboard. [William begins to look at his mother again, she asks him to show me the costume.] So I put my arms through these holes. My head goes here. And then I put one arm in this one and the other arm in this one. I’m going to paint it silver.

And what about last year?
Ummmmm… [I was really racking his memory with these questions. I clearly hadn’t considered that this is maybe his second or third Halloween in real memory and though I know this five-year-old pretty well, this interview is clearly interrupting playtime.] Dinosaur. T. Rex. It was a green dinosaur costume with a hat on your head and it looked like the top jaw of a dinosaur.

[At this point William’s three-year-old little brother Nicholas who has been humming to himself the whole time interjects. “I could be a dragon!” His dad asks if he wasn’t going to be something else. He answers “Iron Man.” Both his parents sigh and tell me neither of these are the jack-o-lantern costume they’ve planned for him.]

Mom, we don’t need another costume. We can just spray paint the jack-o-lantern olive green.

Isn’t Iron Man red?
Yeah, [looking at me like I’m a giant idiot] we could spray paint it red.

Mom: Do you remember what we do for Halloween? Can you tell us your version of how all of this works?
Is it like we all have our own birthday party?

Mom: What about the parade on Seventh Avenue?
What parade? I don’t remember the Halloween parade.

Dad: The Halloween parade, Mr. Kid. Don’t you remember it was you and your friends and you were all dressed up as…
Dinosaurs!

So what are your parents going to go as if you’re a robot?
Robot catcher. Both robot catchers. It’d be kind of bigger than me. I think it could have a really big net. Because then the robots could get tangled up in the net.

Let’s talk about candy.
Trick or treeeeeeet!!! Wait. Do they give us candy, or do we give them candy? [We all laugh except William, who genuinely wants to know. We straighten things out and ask him to explain again how Halloween works.] Um. We go trick or treat. We go around and get candy. And… we get bagels. [Orange bagels from a bagel shop. This kid is so Brooklyn.]