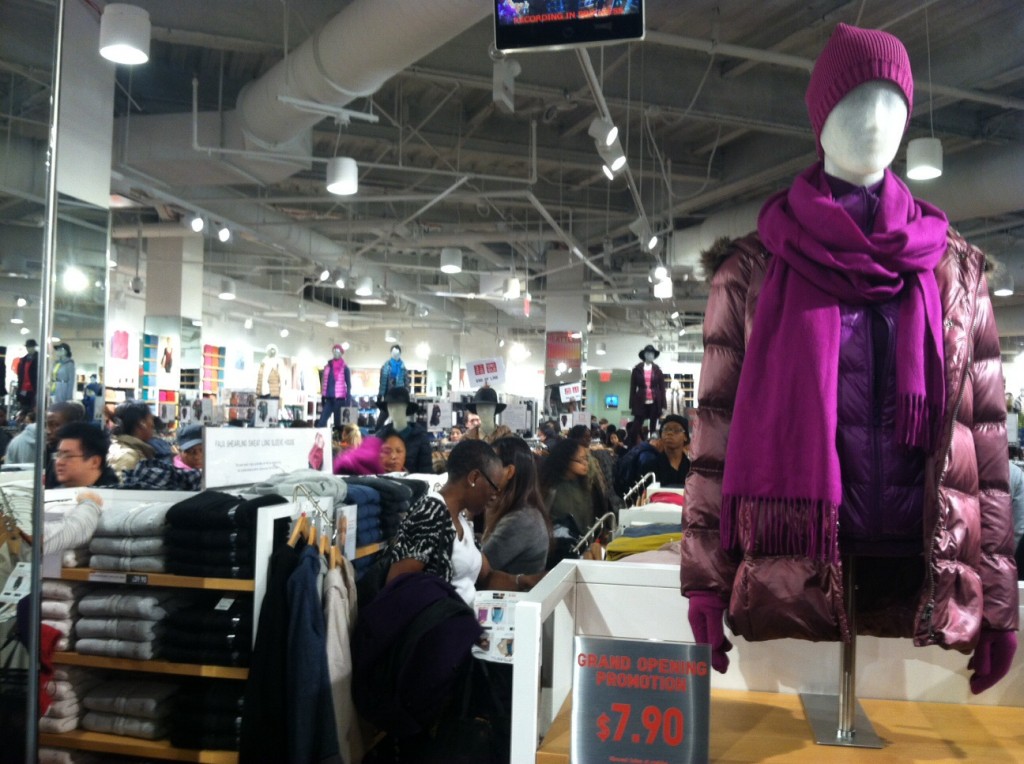 Hundreds of shoppers showed up at Atlantic Terminal this morning for the opening of Uniqlo’s first Brooklyn store to stock up on winter basics at big discounts. Photo: BB

When news that Uniqlo—the popular Japanese clothing chain you might know best for its inexpensive-yet-nice-quality basics (their $20 skinny jeans are no joke)—would be opening a Brooklyn outpost, I for one was on board—anything that saves me a shopping trip to SoHo is a pro in my opinion. But I was wondering if the commercial giant would get the same response from Brooklyn’s boutique-trained shoppers, who I thought might turn a cold shoulder to its opening that was frostier than the 30-degree temps we woke up to this morning.

If the hundreds of people who showed up this morning at Atlantic Terminal to be the first to pick over its new stock of featherweight down jackets, cashmere sweaters and Heat Tech undergarments was any indicator, Uniqlo has nothing to worry about.

I realize its presence serves as a harbinger to some folks of a more lascivious commercial retail take over, but in many ways the move to Brooklyn makes sense (and honestly, what else would fit into a store of that square footage. Be glad it wasn’t an Urban Outfitters). Despite what average monthly rents of $3,000 might indicate, the borough’s socio-economic statuses still run the gamut–and if the store’s reception on opening day is any indicator–Brooklynites are in need of affordable fashion options.

The shop itself is located on AT’s second floor, adjacent to Target and taking up the mammoth space that once housed a Daffy’s department store. With a nod to it’s new neighborhood, the store’s single-floor, open layout is whitewashed with exposed pipes and high ceilings like an industrial loft. Men’s, women’s and kids sections share floor space, which could get frenetic for shoppers, but was well staffed and maintained making it easy to shop despite the throngs, which I wouldn’t anticipate abating any time soon. It’s worth joining the scrum if you’re around this week though, as the fashion giant is offering some serious discounts in honor of its grand opening.