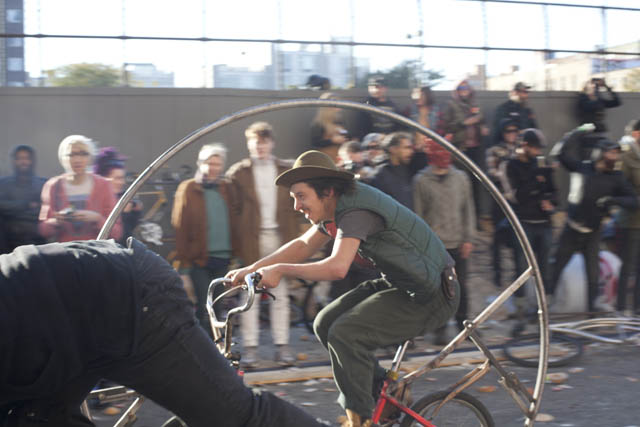 One of the crazy contraptions at Bike KIll, this Saturday, in the parking lot of the Bed-Stuy Home Depot. Credit: Brendan Whittaker

Some people ride their bikes around the loop in Prospect Park on sunny weekend days in the summer and then store their two-wheelers away for the rest of the year; some people commute on their bikes, and some people get a little harder-core and compete in bike races. And then there are others for whom the humble bicycle becomes a work of art and a way of life. The Black Label Bike Club is comprised of individuals who fit into this final category; the club has chapters in cities across the country and around the world, and its members are masters at creating the wildly impractical and sometimes dangerous vehicles known alternately as mutant bikes, or freak bikes. Founded in the early 90’s, Black Label has hosted an annual event in Brooklyn for the past 10 years, which much of its far-flung member base travels to attend and at which local fans—and the lucky uninitiated who chance upon it—can get a glimpse of some of the club’s handiwork, take its creations for a spin, throw food and other semi-hard objects at riders more skilled than oneself, and participate in some competitive games that can easily get gory. This event is called Bike Kill, and it’s the kind of anarchic fun you probably imagined that you’d grow up to have if you were a particularly freewheeling child. Brooklyn Based stopped by this past Saturday to check out the scene. 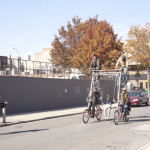 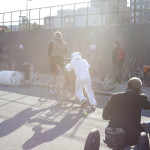 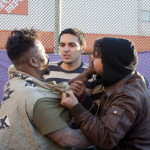 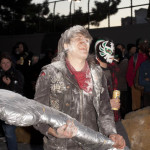 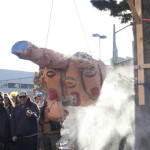 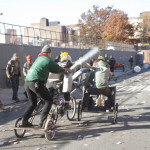 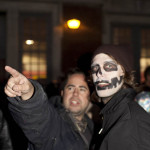 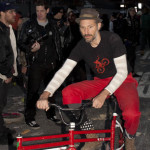 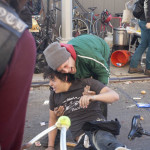 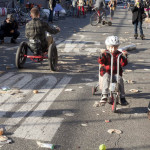 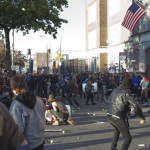 Held in a small lot behind the Home Depot in Bed-Stuy, Bike Kill was audible, and visible, from about a block away as things got started in the early afternoon. Many of the attendees arriving were on bikes of their own, which made for tricky parking—within a few hours there was not a fence or signpost to be found that didn’t have bikes locked to it, and particularly capable bikers who had gotten their sea legs on new contraptions would periodically peel off from the lot for a jubilant spin around the block. A DJ set up at the center of the event spun punk, hip hop and other psych-up sounds, including an oft-repeated sample of the howl from the Duck Sauce hit “The Big Bad Wolf,” and people showed up in face paint, skeleton suits, fake blood, balaclavas, and headdresses, lots of which was worn over a base of mohawks, tattoos and Black Label backpatches (a few standouts included a gentlemen in colonial regalia and a home-made alligator costume). A few lucky kids who attended with their parents had the chance to play with the colossal toys, and before things go crowded in the afternoon, everyone had an opportunity to try out any bike he or she liked.

And oh, the bikes. Easiest to get started on were a number of petite, low-riding numbers, some with tiny wheels that required goofy hamster wheel-like cycling, some with rusted oil drums where wheels would ordinarily be, and some with detached parts that made steering an abstract concept which could easily backfire. Many of the mid-sized bikes were built for a specific trick; a bike with three quarters of a giant metal hoop arcing from the front to the back was made to be flipped, taking a skilled biker for a loop-the-loop, and a pair of bikes had small wooden boogie boards attached in the front just below their handlebars and were used for a competitive ‘bike-surfing’ event in which two two-person teams raced from one end of the lot to the other, trying to keep the surfing half of the team standing on the front of the board for as long as possible. There were tall bikes aplenty, one bike with parts loaded on enormous springs that could bounce while rolling, and a non-bike wheeled art tower made of fold-up baby strollers, but the piece de resistance was a beautiful, double-wide, double-decker bike with a swing suspended in the middle, which lasted about halfway through the event before being curbed. Two piñatas full of flour, one of a giant hand wielding a middle finger and one of an eyeball, were busted open, tennis balls, stale rolls, pitas and bags of rice were provided to onlookers to fling at bikers, and several vast, grimy skulls carved from foam were strategically placed as obstacles and swung around by bikers as low-impact weapons, all adding to the drama of the day.

In previous years, Bike Kill ended with a jousting tournament at dusk, but this year that part of the ritual was skipped. A ghost-tall bike memorial in a quiet corner of the lot was what Black Label members referred the public to for explanation of the omission; it was dedicated to former Black Label member Charles Buckley, who passed away this past spring (although with a permit for the lot that only lasted until 6, plenty of beer cans on the ground and a police presence at the lot entrance, it seemed just as well that things wrapped up before riders started tilting at each other). A lot of the crowd departed to a nearby after-party that picked up a few hours later, which we hear raged into the afternoon the following Sunday, but we’re sure that plenty of people also headed home to wipe off the grease paint and dress their wounds—an indication that this was a good year for Bike Kill.