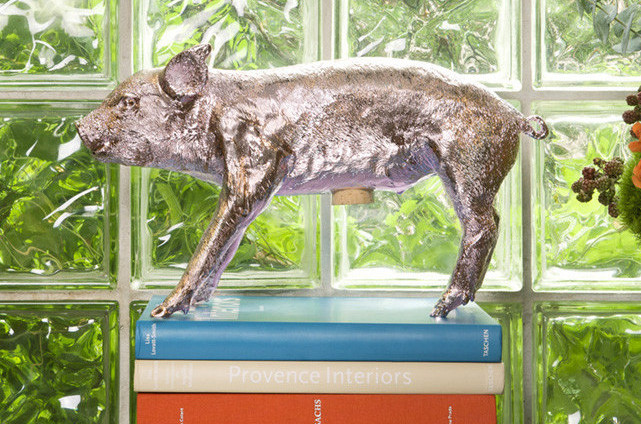 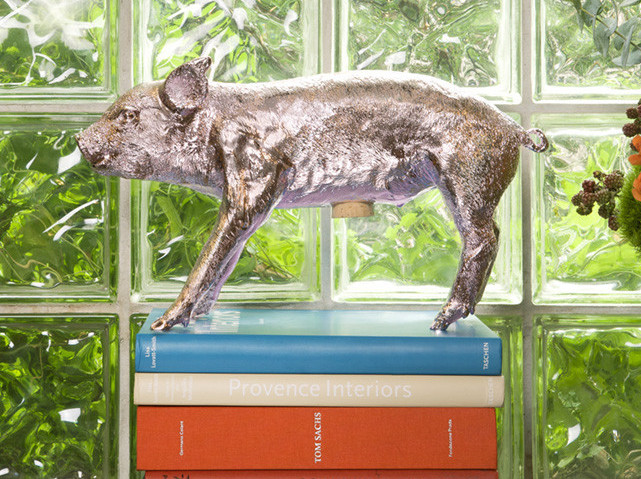 Piggy banks have been popular places to stash spare change since the 18th century, but designer Harry Allen’s modern take on this traditional still bank is a far cry from its earlier incarnations.

“I knew I wanted a piggy bank that looked exactly like a real pig,” Allen says. “I wanted it to be lifelike and I wanted it to be based on a real pig, so I had a little piglet stuffed and cast off of the taxidermy. This was in 2003 or so when reality television had just started. There was this moment when people were really borrowing from the world around them, and I thought I’d try and do that in the design world.”

Allen, who got his master’s in industrial design from Pratt and whose works are in the permanent collections of both the Brooklyn Museum and MoMA, created his version from the body of a piglet that died of natural causes–a bit macabre to be sure, but the end result is a realistic iteration of an old favorite you could easily display alongside your other designed objects. Made of marble and resin and covered in metallic chrome or matte colored finishes, the banks can hold up to $10,000 in paper money (or just the extra change you have hanging out between your couch cushions). They cost between $125 and $220 depending on their finish–I’m particularly intrigued by a glow-in-the-dark version.

“I had contacted these taxidermists in upstate New York to do this,” the designer explains. “They had gone to a pig farm and gotten the original little pig. They’re all hunters and they were going to kill the pig, and they brought it back to the studio and apparently it was so cute–and these are big burly guys (one is bigger and hairier than the next guy)–and they couldn’t kill it. So they actually gave it to a neighbor with a little home farm.”

Fortunately for the tender-hearted taxidermists and for Allen, the farm where their little Wilbur originally came from had a second piglet that was already dead of natural causes, which was stuffed and sent to Allen who lives in the East Village, ensuring no live pigs were harmed in the making of his bank.

I spotted a pair of these little piggies covered in gold chrome in the window of Yu Interiors on Fulton Street over the weekend and wanted to know more about where they came from. Turns out the banks are produced by a Williamsburg-based company, Areaware, that sells unusual everyday objects by local artists that can be functional, fun or both–Allen’s works fit right in, as they include realistic looking objects like a box shaped like a box turtle, a fruit bowl that looks like a bunch of bananas and human hands to hold everything from your phone to your iPad, for those times when you need an extra hand–kind of like Thing from The Addams Family.

“The piggy bank actually started a whole product line,” Allen says. “The technique by which I make them actually affords you a lot of detail in the product. That’s why I chose it to replicate these things from real life–like on my hands, you can see all my pores; on the pig, you can see all the hairs–the detail is very real, which is what differentiates it in my mind from other things.”