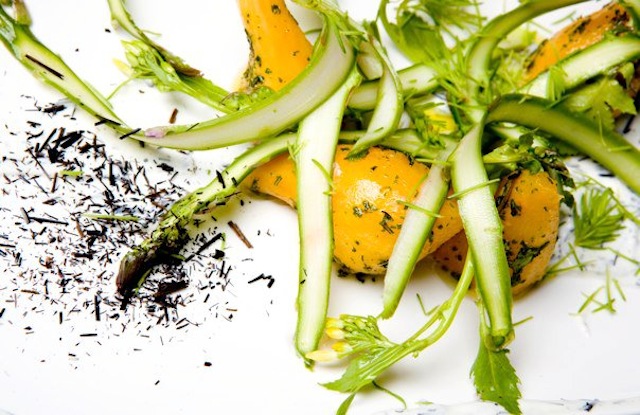 In theory, I appreciate the concept of the tasting menu as an opportunity to sample several of a chef’s best dishes in one sitting, but the actual execution of these exploratory suppers tends to be expensive, which is why I was stoked to learn about Chez Jose. Twice a week, on Thursday and Friday nights, chefs Jose Ramirez-Ruiz and Pam Yung, who honed their culinary skills in local spots like Isa, Brooklyn Fare, Roberta’s and Per Se, prepare a multi-course menu of seven or eight courses from fresh, local produce at a pop-up restaurant located at 160 Havemeyer St. in the former Lake Trout space. The entire meal costs $55 (not including tip) and is BYOB. The couple offers two tastings a night at 7pm and 9:15pm and every meal comes with a basket of fresh-baked bread Yung makes in-house that’s worth the prix-fixe price tag all on its own. Ramirez-Ruiz, who oversees the pig roats at Crown Victoria in the summer, says they typically cap their tastings at 13 people each, so plan ahead and get in your reservation now because their restaurant is already booked solid through December, making it the latest in Brooklyn’s long-standing tradition of events and restaurants that sell out months in advance. –JG