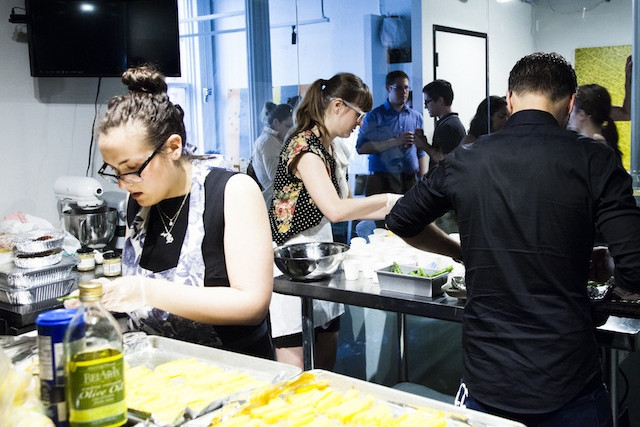 A mutual love of music and food making brought Tracy Candido and Laura Leebove together last February after a friend thought their identical interests warranted an introduction. The two hit it off and turned their shared passions into a side project called Supper Studio, a seasonal dinner party for which they create a menu inspired by the music of an indie band they invite to perform live while everyone is eating.

It’s a multi-sensory experience from start to finish, and the women will be hosting their second dinner this Sunday at The Center for Social Innovation in Chelsea. They’ll be serving up a meal inspired by the Brooklyn psych-pop band Teen, which we featured on BB last fall.

Candido came up with the idea for Supper Studio while looking for a way to reconnect with New York’s indie music scene where she produced music shows before stepping away to focus on food and art-related events and programming.

“I wanted to pair something that was higher up on the senses’ hierarchy, like hearing with food,” Candido says. “I find that just to eat or drink something is never enough for me, but when I bring taste and smell and touch into an experience, it kind of elevates the whole situation.”

Making music-inspired recipes was something Leebove was already familiar with, as she’d been creating them on her own for her blog Eating the Beats. Candido says she and Leebove typically come up with the menus for their parties over afternoons spent holed up together listening to music and dissecting elements of songs they feel can translate well to food.

“Sometimes we take out a few songs to focus on or we just talk about musical elements that are present throughout a lot of the band’s catalog,” adds Leebove. “But we talk about what makes up the band’s music, and then we talk about the different qualities of it, and then we figure out what foods can kind of embody those qualities. We want people to hear the music and think about what they’re eating and how they relate to each other.”

For Teen’s music, this meant creating dishes that mirrored the psychedelic elements of its songs, as well as the familial bonds of its members, says Leebove. The Lieberson sisters–Katherine, Lizzie and Teeny (who was formerly part of the band, Here We Go Magic)–formed the band with longtime friend Jane Herships in 2010.

“One theme that is going through this menu is the balance of the artificial and natural, because they have kind of an East Coast/West Coast vibe,” Leebove says. “They’re based in Brooklyn, but their music reminds us of California. And in California, everything is natural and whatever and here it sometimes can be more processed and whatnot. So a lot of the dishes have some element of something that is natural, something that is processed.”

With this in mind, Candido and Leebove have created a menu that includes Doritos popcorn, curried pumpkin and mushroom soup, lamb tacos, blue potato hash and rose marshmallows and Lambrusco rose chocolate truffles. Vegan substitutes are available and the whole meal, which comes with two drinks and a concert, costs $65.

Sunday’s event will be the first time Teen has played this kind of setting, if you don’t count the times Teeny says her mom would have her sing for her supper as a child.

“This will be our first dinner party,” she said in an email to Brooklyn Based, “except for the ones growing up when my mother would make me sing. We have a different vibe planned for the evening.”

She says the band plans on performing a Justin Timberlake cover in addition to its own original songs, which they’ve reworked specifically for Supper Studio.

“We’ll also be reworking old music for just synth and voice (maybe some drum machine), so it’ll be an interesting and new take on our material. Probably the only time we’ll play it this way.”