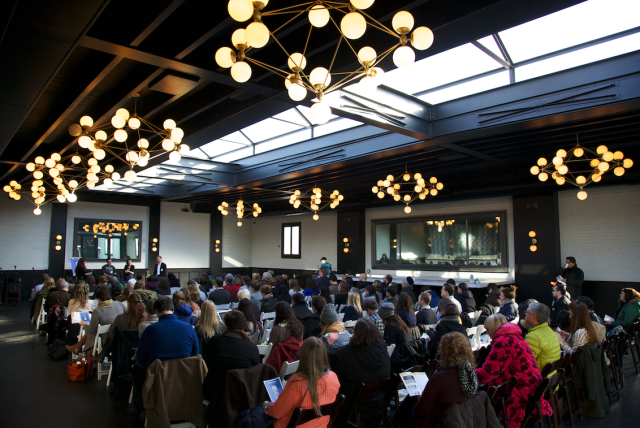 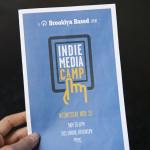 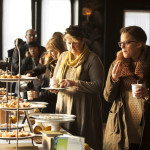 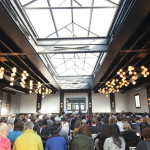 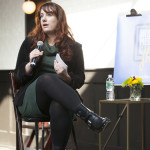 Annaliese Griffin, Brooklyn Based Editor-in-Chief, moderated and MC’ed for much of the day. Photo: Julia Cawley 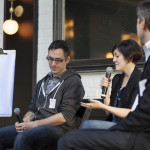 Our keynote panel included Jake Dobkin of Gothamist (left), Grace Bonney of Design*Sponge, and Steven Waldman of Beliefnet and The Brooklyn Game, talking about the secrets of a successful site. Photo: Julia Cawley 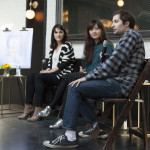 In the second panel, Amanda Kludt of Eater (left), Connie Wang of Refinery29 and David Colon of Brokelyn all shared their theories on why some posts go viral and others fly under the radar. (Sometimes it’s random, but often readers love service stories. Photo: Julia Cawley 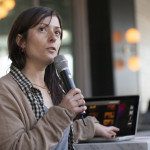 Jen Galatioto of Greenpointers schooled the crowd on taking professional photos, why you should only take food photos during the day, even with an iPhone, and how easy it is to make an animated GIF (if you have Photoshop). Photo: Julia Cawley 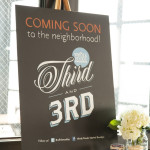 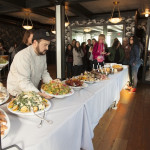 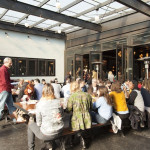 The courtyard at 501 Union doubled as a co-working space and a sunny spot for lunch. Photo: Julia Cawley 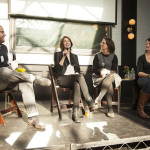 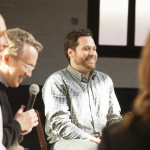 You may not need a sense of humor to sell ads, but it helps. On stage from left, Sascha Lewis of Flavorwire, Josh Albertson of Curbed Network, John Shankman of The Awl Network and (not pictured) Ned Berke of Sheepshead Bites and Bensonhurst Bean all talked about the trials and challenges of selling ads on a national and local level. Photo: Julia Cawley 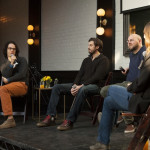 In our next panel, Scott Stedman of Northside Media Group (left), Chris Johnson of Wakefield/Uncubed and C. Max Magee of The Millions talked with Brooklyn Based Publisher Nicole Davis about the many ways they generate income beyond advertising, like hosting events and brand “activations.” Photo: Julia Cawley 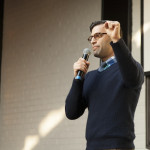 Jeremy Schwartz of Squarespace gave an inspirational primer on Low-Tech Ways to Make Your Website Great (linked to below). Photo: Julia Cawley 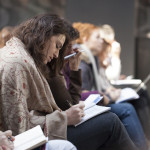 Despite this being an online media conference, the very old school method of pen and paper note taking came in handy. Photo: Julia Cawley 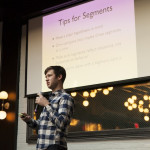 Michael Dinerstein of Skillshare gave a great overview on how to use Google Analytics to set goals and figure out how engaged your audience is (also linked to below). Photo: Julia Cawley 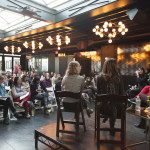 One conference veteran told us that the audience at IMC was the most engaged she’d ever seen. Photo: Julia Cawley 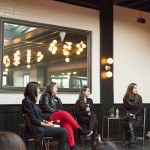 The last panel of the day, moderated by Brooklyn Based co-founder Chrysanthe Tenentes (left), featured Margit Detweiler of Tue/Night, Maia Raposo of Brooklyn Brewery, Liz Gumbiner of Cool Mom Picks and Lexi Nisita of Refinery29. It was clearly one of the most anticipated panels, filled with social media tricks. (Everyone uses Hootsuite, and Google Plus can do wonders to your page rank) Photo: Julia Cawley 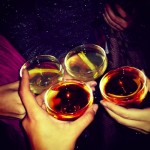 The “Around the Corner” and the “NY Palmetto,” two stiff drinks courtesy of Greenhook Ginsmiths, Atsby Vermouth, and Owney’s Rum capped off the day. Credit: @SALOseries

We’ve produced a number of events over the years at Brooklyn Based, but yesterday’s Indie Media Camp was by far the most satisfying. The daylong conference was filled with our kind of people—media makers, indie publishers, and those still in the planning stages of their own blogs. We curated the panels to gain insights into the things we do on a daily basis, often in a vacuum (or just holed up in our apartments). How do you sell ads? How do you get good photos? What kinds of stories go viral? What are your social media secrets? If you’re not in the business of blogging, branding, or online journalism, it would have been a snooze, but for us it was fascinating. Oh, and the food and drinks rocked. Whole Foods Market put out an amazing spread of cured meats and local cheeses, a killer kale Caesar with chicken, salmon or seitan, honey-miso baby sweet potatoes and so much more good grub (including the best gluten-free desserts we’ve ever had). Naturally Delicious and Gimme! Coffee provided breakfast treats and during our cocktail hour, the Brooklyn Brewery brews and stiff drinks from Owney’s Rum, Greenhook Ginsmiths, and Atsby Vermouth were flowing. Hosting it at 501 Union, a spectacular venue, also made the event extra lovely.

Of course, there were definitely some kinks, and we already know how we’d produce next year’s IMC differently. (If you’ve got ideas, we’d love to hear them.) We also didn’t get answers to every aspect of the industry that we wanted, so we’re going to solve that by starting a series of monthly Indie Media events (stay tuned!). We did glean some pretty great takeaways, though. Below are a few of the things we learned.

-It was very heartening to hear that other editors assign important stories that don’t always gain traction with their readers or the masses. Amanda Kludt, the editorial director of Eater, shared her experience of creating the video documentary series, The Sandy Chronicles, which followed restauranteurs in the process of rebuilding their operations a year after the storm. It was critically acclaimed among her peers, but it didn’t garner the same kind of viral response as, say, a recent short video on Umami Burger.

-On the events panel, Scott Stedman of The L/Brooklyn Mag/Northside Media shared some thoughts that really resonated with us, like the idea that “Brooklyn has become a national adjective for what’s next.” (Even an international adjective, if you trust the French.) We liked his take on event sponsorship, too. In essence, he said, brands that sponsor events are branding the most valuable thing of all—a person’s experience and time, which made us look at events in a whole new light. We also learned that the word “activation” is just fancy advertising argot for “creating a really unique experience between a brand and a person.”

-Grace Bonney, editor of Design*Sponge, reminded us how important it is to build trust with readers who are very engaged with your site and your content—and she thinks that sponsored content often undermines that trust.

-Two words were coined in the course of our panels yesterday. First Jake Dobkin, publisher of Gothamist, used the word “BuzzFeedify” to describe the trend of conceptualizing all stories—even the big important one—as silly listicles. And John Shankman, publisher of The Awl Network described his audience, and everyone at IMC, as “indiellectuals,” a word we’re totally stealing.

–Refinery29‘s senior global editor Connie Wang and news editor Lexi Nisita both mentioned Google Plus as a social media network that you should be using (contrary to popular opinion). They post all their stories there, and encourage their writers to do the same, because it gives a boost to the story’s page rank—and to your own online profile as a writer.

-Jen G. of Greenpointers gave a fantastic primer on taking pro photos, and revealed how to make an animated GIF. (Unless you know Photoshop, it probably went over your head. We’re actually planning on doing another photo workshop with her to delve deeper into this.)

-Jeremy Schwartz of Squarespace offered 6 Low-Tech Ways to Make Your Website Great and Michael Dinerstein of Skillshare uncovered the many ways you can actually use Google Analytics and set goals within it, as well as the very simple means of revealing your most popular Facebook posts.

-Indie publishers are generally very funny, especially David Colon, editor of Brokelyn, who would really like you to read his thoughts on Thor: The Dark World and the intern economy.

-The biggest takeaway of all, however, was the fact that everyone in the room yesterday was writing or selling ads for their site(s) because They. Fucking. Love. It. Even Josh Albertson, the president of Curbed Network, which Vox Media recently purchased for a reported $25-$30 million, said that Curbed began as a passion project, not as a vehicle to make big bucks. So follow your dreams, indie publishers. It could lead to something.