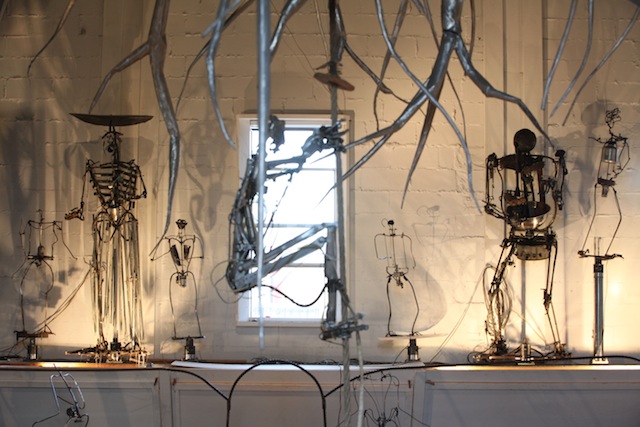 On Sunday evening, while looking for The Robotic Church on a dark street in Red Hook, the only indication that service would begin soon was a woman standing outside of a lit doorway, holding a clipboard. We were directed inside a soaring space that looked like the workshop of an inventor who was making a menagerie of metal figures—men, women, monkeys (or maybe dogs?) lying in suspended animation in the corners, atop the rafters, peering down upon us, ready to drum. We signed a waiver (which I didn’t read, but presumably it addressed the treacherous, albeit beautiful, tree-like structure hanging above the audience), and then the artist Chico MacMurtrie, the father of these beings, explained that after touring the world and falling into various states of disrepair, his robotic sculptures were now living out a second life in their new home, where they were installed on multiple levels like saints in a chapel. Before they came to life, we were warned that it might be loud and that the hissing, popping and wheezing of the pneumatically powered robots might scare some children, which comprised about a third of the audience.

My two-year-old son could not stop grinning. In the course of the 30-minute performance, his eyes widened as the metallic figures, some small and skinny like Giacomettis, others big, tall Robo-men,  moved and made their own cacophonous, rhythmic harmonies. While he was enjoying things on a purely sensory level, I was trying to guess at what it all meant. Was the man slowly climbing up the rope in the middle of the room some symbol of the Ascension? The cardboard-like figure that inflated and then grotesquely deflated some version of a crucified Jesus? At times it did feel straight out of a church service, in this case a Pentecostal one where the congregants speak in tongues and writhe around on the ground. At other moments I felt as though I was watching what toys do in Hollywood films, come to life when the adults aren’t watching. The setting—an ornate, intriguing space that from 1878 to 1928 used to be a Norwegian Seaman’s Church, the first in the city—completed the feeling that we were in a creative sanctuary, watching the work of a man answering to a very original calling.

There are only two more installments of the Robotic Church this Saturday Nov. 23 at 7pm and Sunday, Nov. 24 at 8pm. Tickets are a suggested $10. You can make an entire day of it on Sunday, and first see MacMurtrie’s solo show, Chrysalis, down the street at Pioneer Works, where there will be a special performance from 4 to 7 PM, including a cameo by MacMurtrie in his “Inflatable Architectural Intervention Bodysuit” at 6 PM. RSVP for the closing performance at Pioneer Works here.