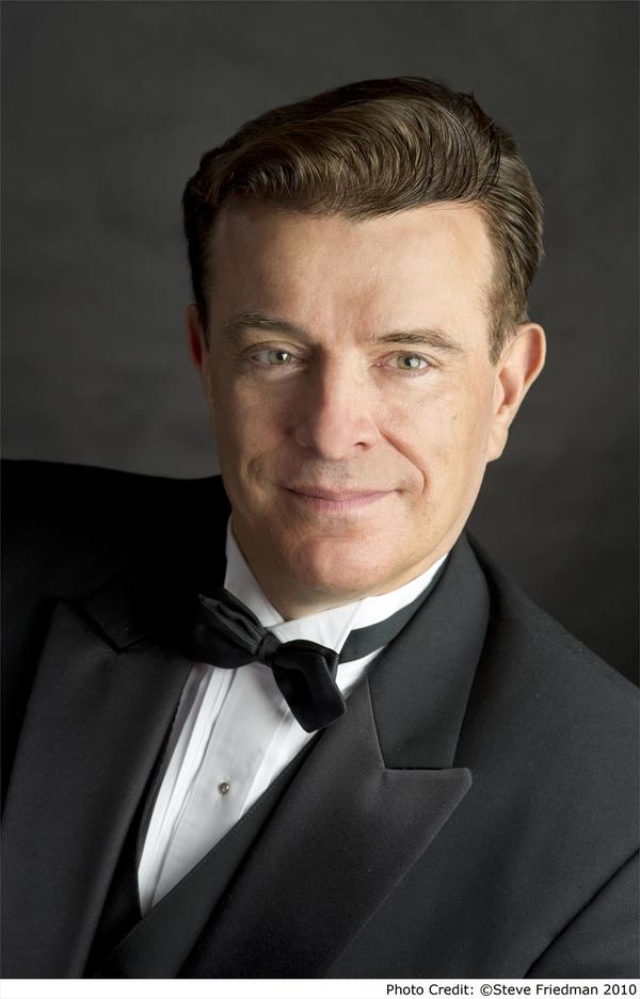 Although he grew up in the rock and roll era, musician Vince Giordano has been trapped in the 1920s since childhood. On visits to his grandparents’ place when he was a child, the Brooklyn-born Giordano was exposed to the music of the Jazz Age through his grandmother’s old Victrola and records. “I was just amazed because the energy, the vitality, the fun and the craziness of that era came through out of that old machine,” he told me recently. “It was a real experience, as we used to say in the old days. That’s how I got bitten–I was five years old.”

Giordano’s love for the music of the 1920s and 1930s has translated into a star-studded musical career. He’s the band leader and arranger of the Grammy-winning jazz orchestra the Nighthawks–they’re the musical backdrop to Boardwalk Empire, which has a season finale this Sunday, Nov. 24. On the HBO series’ recently-released soundtrack, the band paired up with modern musicians including St. Vincent, Neko Case, Patti Smith and the National’s Matt Berninger to record new renditions of popular standards from the period of bootleggers, flapper girls and crime bosses. Period dramas are a thing for The Nighthawks, who have been around  since the mid 1970s. They have recorded music for, and appeared in, films including as The Aviator, Finding Forrester, and Revolutionary Road.


“That was a neat little experiment and challenge that really worked,” says Giordano, who still resides in Brooklyn, of the contemporary artists who tackled the standards on the Boardwalk Empire soundtrack. “It was amazing. They really got it out of their so called what-they-do-all-the-time box and made it a real loving tribute to the music of the 1920s.”

The Nighthawks have also worked with Elvis Costello, Rufus Wainwright and the legendary Liza Minnelli. “Elvis Costello informed me that his father was a big band musician in the 30s and 40s,” Giordano says. “He had heard a lot of the old recordings as a kid. When we did “It Had to Be You,” we did it in the original brisk tempo. Rufus Wainwright–we worked with him on The Aviator. He sang “I’ll Build a Stairway to Paradise, which was amazing, and he loves playing this music too. [Liza] basically got [“You’ve Got To See Mama Ev’ry Night (Or You Can’t See Mama At All)”] in one take because she’s such a pro….I hope I get a chance to work with her again. ”

Giordano has wanted to become a musician since taking up the tuba and listening to old 78 RPM records during his childhood. In his late teens, he joined a Navy band that toured all over the States and South America. In 1976, he formed the Nighthawks, who were a musical anomaly in a time when rock and disco were the rage. “In those years, I had many veteran musicians, some had even worked back in the ’20s,” says Giordano. “I was in my 20s. These fellows were in their 70s and 80s. I learned a lot from these fellows… I got a good education.”

It was word of mouth that got the Nighthawks to work in movies and television starting with their appearance in the 1984 Francis Ford Coppola film The Cotton Club. “They said they needed some young musicians to play in this little scene with Richard Gere and Diane Lane,” Giordano recalls. “’It’s a small combo, so you guys had to shave your beards.’ So the word had kind of gotten out that I was this young fellow who really loved this music. It wasn’t like I was doing it for a novelty. This was real devotion and I had a good reputation with all the musicians.” Further projects for the Nighthawks included several Woody Allen films and The Aviator, during which Giordano worked with director Martin Scorsese and music supervisor Randall Poster. “So when Boardwalk came in with Scorsese and Poster, and it’s 1920s music, they said, ‘Let’s call Vince, he did a pretty good job with The Aviator.’ So that’s how it came about.”

Giordano and the Nighthawks continue to work outside of TV and movies. In addition to doing black-tie parties and jazz events, they also have a residency at Iguana in Manhattan every Monday and Tuesday. And with big name artists like Bryan Ferry and Rod Stewart embracing the standards in their repertoire, it seems like the ’20s and ’30s music are in vogue into the 21st century–even if the Nighthawks have been doing it much longer. “I think we’re in a good time in this new era,” says Giordano, “that a lot of performers who do up-to-date or really more modern rock music will be open to listen and grab some of the excitement and feel and passion that these artists from 90 years ago put into their work. That’s great. It’s a renaissance for the 20s and 30s to do it in a real classic style.”

Vince Giordano and the Nighthawks play at Iguana, 240 West 54th St., Manhattan, every Monday and Tuesday 8pm–11pm; cover $15 with a $ 20 food /drink minimum. Their music on  Boardwalk Empire Vol. 2: Music From the HBO Series is now available. For more information, visit vincegiordano.com.