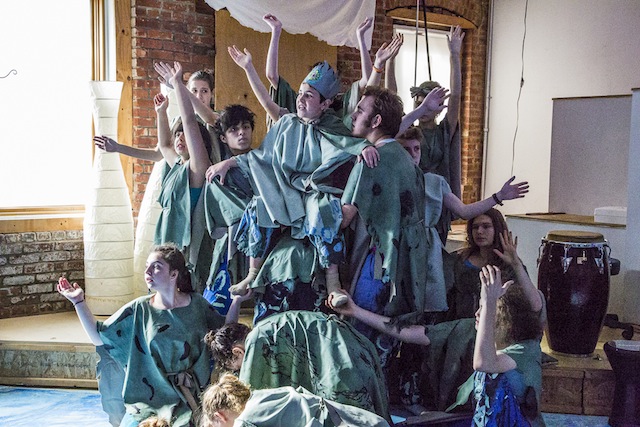 In 2002, Greg Kotis and Mark Hollmann struck gold with their musical Urinetown, a show about people who had to pay to pee because a 20-year draught depleted their town’s water supply. It won two Tonys–one each for best book and best score–and created instant show-tune classics like Run, Freedom, Run!

The water might not have been flowing for their characters, but Kotis’ and Hollmann’s creativity certainly was–the two wrote a second show around the same time in the same satirical vein. Yeast Nation (the triumph of life) tells the story of a society of single-celled organisms living around three billion B.C. that’s blighted by a famine and an overbearing ruler who inflicts harsh punishments on any amoeba that gets out of line.

Like Urinetown, Yeast Nation (their musical titles all sound like euphemisms for urinary tract infections don’t they?), is a satirical look at our current society’s excess and overconsumption. It’s only been staged in Alaska and Chicago since its premiere at the New York Fringe Festival in 2011, but a limited run of the musical is playing this weekend in Brooklyn at the Greenspan Center, a Watsu water massage studio in Williamsburg. Sunday’s shows are already sold out, but there’s still time to snag $10 tickets for tonight and Saturday at 7pm.

Kotis’ wife Ayun Halliday and Ben Watts are co-directing the performance and the entire cast consists of homeschooled teenagers from New York and New Jersey.While the performers may only be in their teens, the musical itself is intended for an adult audience. Performed in the round, with the audience surrounding the stage, Kotis says the musical was inspired by a Greek production of Antigone he saw in 1995.

“This is born out of both our preoccupation with overpopulation and consumption and that kind of stuff,” Kotis says.”And it’s very closely related to Urinetown. Mark and I sort of designed it to be performed by the same company. There’s a lot of parallel characters. There’s an older man who is the leader of this world–like Cladwell is the leader of Urinetown. In Yeast Nation, you have Jan the Eldest, the great king, sort of an Nebuchadnezzar kind of great king. It’s all ridiculous and absurdity, and hopefully funny.”

Kotis’ son Milo is 13 years old and playing Jan the Eldest who he sees as a conflicted character.

“I think he cares about his kingdom, but he doesn’t really know that much about running it,” he says. “I always think of him as not being bright at all. He’s not the sharpest knife in the drawer.”

A bit of dimness is to be expected from someone who’s only just evolved from the primordial ooze, but his lack of leadership skills cause problems for is fellow yeasts like any monarch’s indecision might do.

Despite being unicellular, Kotis’ fellow cast mate Coco Watts, 13, says all the yeasts show a lot of depth.

“All the characters in the play are actually really interesting and have more than one side to them,” she says.

Yeast Nation is set to an original score created by Hollmann, who says he felt rock music felt the most primeval primeval and “seemed like a great way to dramatize the primordial ooze, sort of in the same way that Spinal Tap included a tribute to Stonehenge in their set list.”

“I’m trying to evoke the dawn of time, when everything was new,” he explained in an email to BB. “The opening number, “Hear the Song,” uses mainly the pentatonic scale, you can play easily at the piano by using only the black notes. That scale has a primitive sound; it is also the basis of the blues scale. So, to attempt to put that into words, there is something raw, vulnerable, and painful that gets expressed musically by these yeasts in their quest to survive.”